Turkey a land of hope, tolerance for African expats 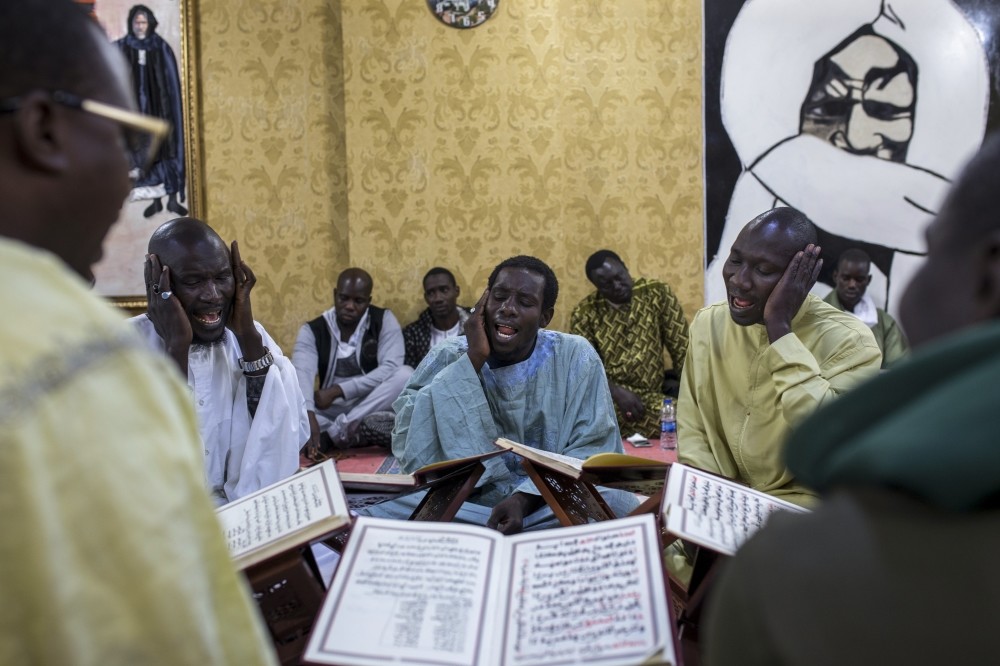 Senegalese migrants recite hymns in a religious ritual in Istanbul. The city is home to a large expat population from African countries.
by Daily Sabah with AA Dec 08, 2017 12:00 am

Turkey, which was once a gateway to Europe for migrants from African countries, has become a new home for a large African diaspora, praising the quality of life and religious tolerance the country offers

Usually a transit country for migrants hoping to reach Europe, Turkey is nowadays home to people fleeing poverty and wars. For people from African countries, it is a favorite destination for its quality of life and religious tolerance. Turkey's African expat community has been steadily growing, reaching about 1.5 million according to unofficial figures.

Every year, thousands of people leave the African continent in search of a better life in Europe. Some die before reaching the Mediterranean coast of the continent, while others fall victim to boat disasters en route to European shores.

Those following the Turkish route to reach Europe often end up staying in the country longer than they thought. Many prefer to settle here, building a new life in Istanbul, which is home to probably the largest African expat community in Turkey.

Statistics show one in four African migrants prefer Istanbul for accommodation and Muslims from North African and sub-Saharan African countries, including Senegal, Mali, Niger, Ghana, Gambia, Ethiopia, and Somalia, mostly prefer to come to Turkey instead of going to other countries.

Most of them are fleeing civil wars, terrorism and poverty.

Africans are a common sight in Istanbul, especially in the Fatih, Beyoğlu, Şişli and Zeytinburnu districts.

To send money to their families back home, many work as street vendors. Others pursue careers in football or run small businesses.

In almost every busy street, you can encounter at least one African vendor. Most of them are from Senegal and almost invariably hawk watches.

It is "a trade secret" they say when asked how they are able to make a living by selling cheap watches, but they usually make enough money to send back home. In winter, many take temporary jobs in factories.

Ismail Kamara arrived from Sierra Leone three months ago. He shares a small flat with 13 other young migrants in Tarlabaşı, a neighborhood a short distance away from the city's famed Taksim Square.

He plans on studying at a Turkish university in the future but for now, he has to earn money for his parents back home who lost their possessions in a recent flood disaster. He works in a textile factory to make a living.

"It is good to live here. We have a place to stay and always have something to eat," he says.

Still, he plans to leave for Europe "if the opportunity arises." He is inexperienced in the job he currently does and that can be seen on his bruised hands.

"It is a difficult job, but I can't complain because I have a job at least," he says.

Osman Muhammad Soma, another migrant from Sierra Leone, came to Turkey to study at a university too, but poverty forced him to skip his education.

He is now a part-time factory worker but says he has not "lost hope" about pursuing an education in social sciences. He praised Turkey's "tolerance" of migrants.

"People treat us very well, unlike Europe. We don't have good jobs, but we are doing well. I could have a future here if I could study," he says.

Since a 2005 initiative started by Turkey to develop closer ties with African countries, many also arrive as students or for business opportunities.

The state-run scholarship program attracts a large number of students from Africa. According to Africans living in Turkey, they get good jobs in their respective countries when they return after receiving better educations.

Abdulsemih Ali Osman, a Sudanese national who studied medicine at Istanbul University, stated that African students studying in Turkey return to their respective countries to work as doctors, engineers or economists.

Praising Turkey's investments in Africa, he noted that Turkey, contrary to the West, came to Africa not for exploitation but for establishing unity and togetherness.

Yosuf Moseiv, a Ugandan studying in a Turkish university, said, "The good relations between Turkey and Africa are pleasing developments. I cannot compare Turkey with any other country."

Abdulmannan Sharif, an Ethiopian doing his master's degree in business administration in Istanbul, said he came to Turkey on his friends' recommendation, citing the people's hospitality toward foreign students and the quality of the education, which is also cheap.

"I've found what I expected," he said.

Ali Farah, a Djiboutian who deals in foreign trade in Turkey, lauded the country's knowledge and experience sharing with Africa.

"For example, China does not share knowledge when it brings its workforce and factories. When Turkish investors come to Africa, they bring factories along with knowledge and experience," he said.

As the number of migrants grows, so do the sizes of religious congregations. Istanbul, which has a large number of churches, is the perfect place for Christians from African countries.

African Muslims following Sufi branches of Islam gather in houses or warehouses for their weekly rituals where the devotees of Tijaniyyah and Mouride gather to sing hymns on Thursdays and Fridays.

Followers of the Mouride order, whose devotees are mainly concentrated in Senegal, hold a yearly gathering to mark the anniversary of return of their late leader Ahmadou Bamba from exile.

This year, about 1,000 Senegalese migrants came together in a sports hall in Istanbul's Esenler district on Nov.11 to mark the occasion, praying through the night.

Modou Nar Toire, a Senegalese migrant, says they did not face any obstacles while performing their rituals.

Christian migrants from sub-Sahara countries say though they were concerned about facing possible discrimination for their faiths, they never faced it in Muslim-majority Turkey.

Churches provide both a place to pray and also act as a community center for migrants seeking roommates or jobs.

Carlos Kameni, Cameroonian goalkeeper of the Fenerbahçe soccer club, is among the faithful that attend church services. He says he is happy to live in Turkey and says he never faced "racial or religious discrimination" in the country.

Chris Gomes, a Gambian migrant, says Turks do not discriminate against them based on their faith.

"I have African, Turkish Muslim friends, and Turkey is a really free country. The only problem we have here is not speaking Turkish and not having many Turks speaking English around us," Gomes says.