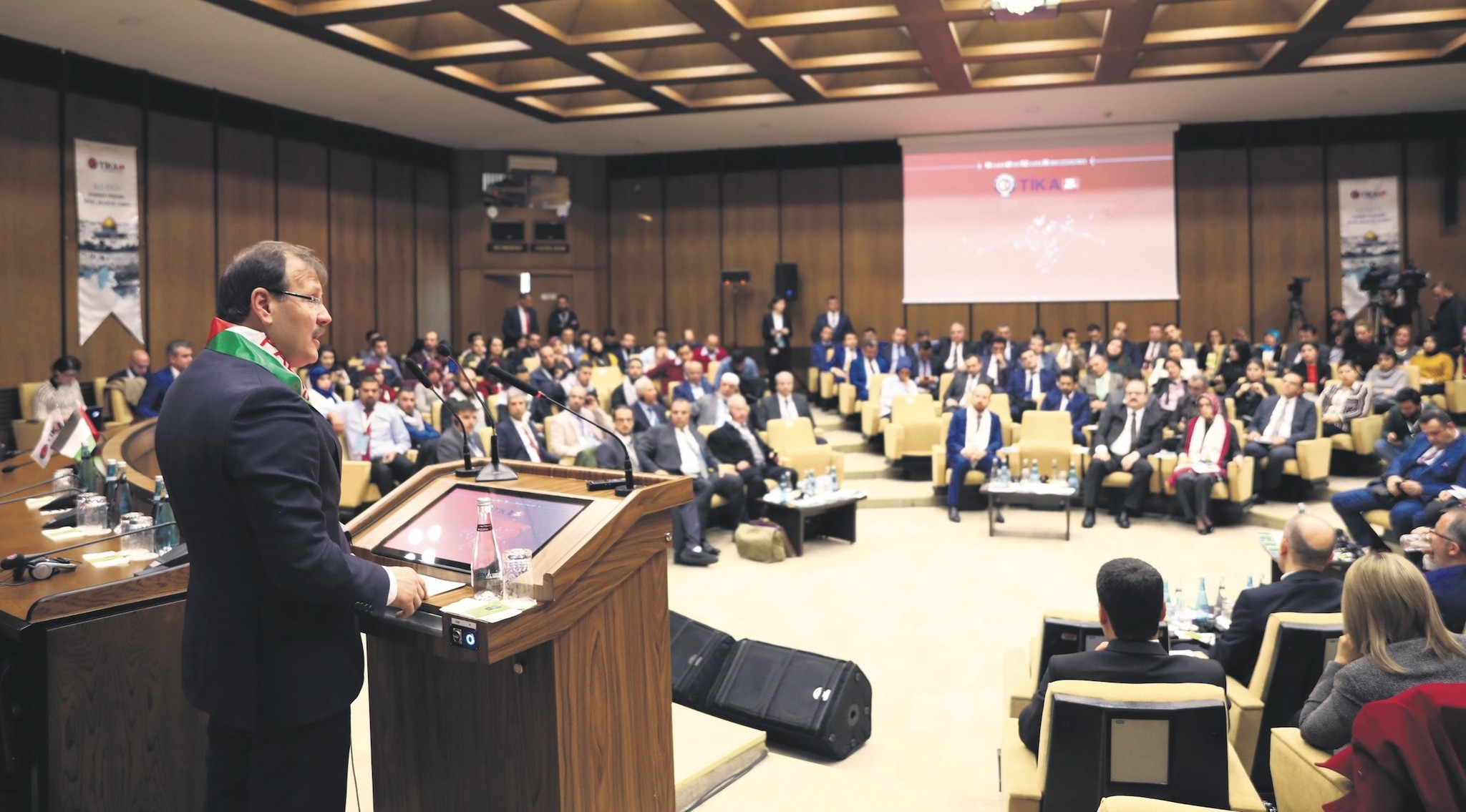 Just as leaders of Muslim-majority countries gathered in Istanbul to discuss a response to the U.S. president's controversial decision to recognize Jerusalem as Israel's capital, a somber event was held in Ankara. Organized by the Turkish Cooperation and Coordination Agency (TİKA), the event highlighted Jerusalem's history and Turkey's efforts for the city and Palestinians.

Palestinian academics and artists, Deputy Prime Minister Hakan Çavuşoğlu and President Recep Tayyip Erdoğan's son Bilal Erdoğan, the acting president of a prominent charity, were among the guests at the event Jerusalem: In Pursuit of Peace, Yesterday, Today, Tomorrow.

The event opened with the Turkish and Palestinian national anthems followed with the launching of an exhibition on Jerusalem by Palestinian artist Sihab Qawasme. The first known footage of the city shot by the Lumiere Brothers in 1897 was also screened at the event.

Addressing the event, Çavuşoğlu said that Turkey has carried out over 70 projects in east Jerusalem and the West Bank since 2005, the year when TİKA opened an office in Jerusalem.

TİKA's 71 projects in East Jerusalem and the occupied West Bank include the restoration of the Dome of the Rock, which is inside the Al-Aqsa Mosque complex, the Al-Quds University 400-student girls' dormitory project and restarting Tomb of Moses celebrations, which ended after Israel's 1967 occupation of East Jerusalem.

"This year, the Turkish Directorate General of Foundations managed to deliver 10,000 tons of humanitarian aid and food to Gaza. The handover of 320 houses that were built in Gaza was also completed last week," Çavuşoğlu said.

He added that during the 15 years of Justice and Development Party (AK Party) rule, Turkey's Turks Abroad and Related Communities Presidency (YTB) has supported 89,000 Palestinians studying in Turkey. He also said that Jerusalem will not be saved by tears alone, but when humanity assumes its responsibilities.

"If Israel doesn't withdraw from the territories that it invaded and return to the pre-1967 borders, there will be no peace or stability in the world," he contended, criticizing the U.S. move to recognize Jerusalem as Israel's capital.

TİKA President Serdar Çam said that the program was actually a part of nationwide, weeklong events by state agencies on Jerusalem, and in the Ankara program, they also focused on Ottoman-era rule of the city.

Çam said it is important to understand the process after the Balfour Declaration was announced a century ago.

"We are a nation who worked to establish peace in the world and will keep working to do so," he said regarding the status of Jerusalem.

He said the ummah needs to stand up for the people of Jerusalem "who face everyday challenges."

Other speakers at the event discussed Ottoman reconstruction of the city walls and Ottoman-era places of worship.

Adeeb Joudeh, a member of a Palestinian Muslim family entrusted for centuries with the keys of the Church of the Holy Sepulcher in Jerusalem - one of the holiest sites for Christianity - and Wajeh Nusseibeh of the Nusseibehs, another Muslim family tasked with opening and closing the church, were among the guests at the event.