As EU fights over migrant quotas, Turkey discusses how to help them 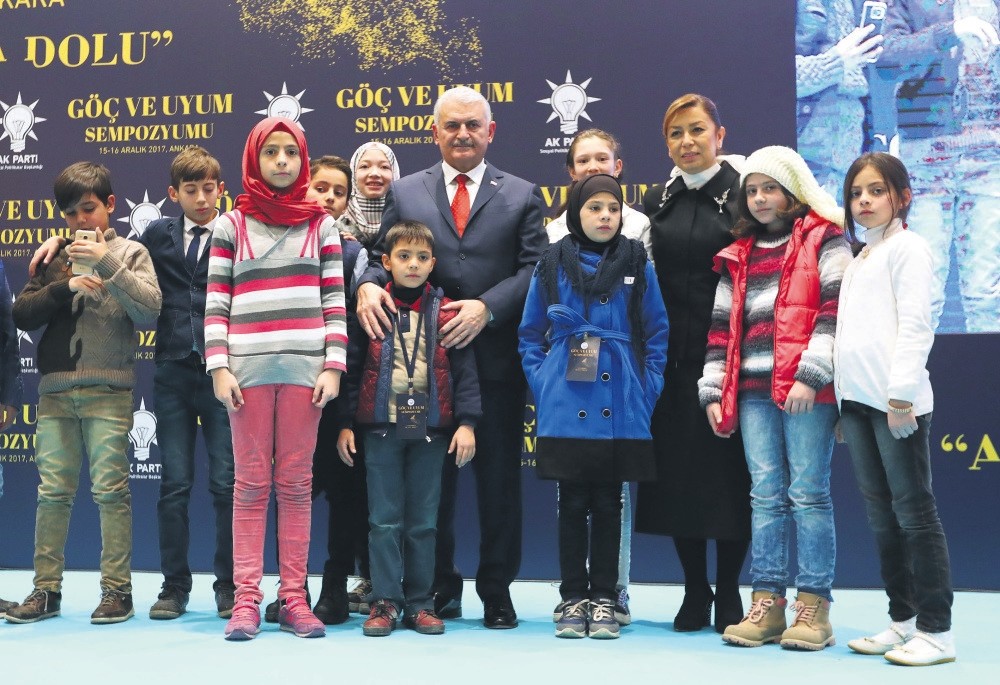 Amid a heightened debate in the EU over mandatory refugee quotas, Turkey hosted a symposium Friday on migration and adaptation, discussing better ways to facilitate their adaptation

As country that has been at the center of a surge in the number of refugees in past years, Turkey ponders what to do for the needs of millions of migrants and refugees it hosts. A symposium opened on Friday in Ankara, called "Migration and Adaptation," beginning with a speech by Prime Minister Binali Yıldırım who called on the world to reconsider how to handle the large number of refugees. The event, organized by the ruling Justice and Development Party (AK Party), comes as European countries laud European Council President Donald Tusk for his criticism of mandatory quotas to relocate refugees and migrants in Europe.

The EU held a two-day summit on what the migrant crisis for which countries have failed to reach a consensus on tackling the issue.The two-day symposium focused on the assessment of the past six years during which Turkey received a steady flow of refugees from neighboring Syria, the 1951 Geneva convention on refugees, the education of migrant children, issues of migrant women, migration and social policies and cultural aspects of the migration.Turkey has more around 1 million migrants and more than 3 million refugees from war-torn Syria. The country has the largest community of refugees from Syria in the world and strives to better adapt them to Turkish society as the civil war in Syria further drags into 2018. Although refugee camps were set up in border towns, the majority do not live in them, challenging Turkey to boost humanitarian assistance to millions.

Addressing the symposium, Yıldırım said the international community should focus on the causes of mass migration rather than its consequences. "This is a global social problem that cannot be ignored and measures are needed. Countries need to work together to address to the root causes of migration," he said. Yıldırım said Turkey has been the most compassionate country in terms of receiving migrants and criticized developed countries for not extending a helping hand to migrants.

"We have to discuss global terrorism, oppression by an unjust administration, pressure and other problems that cause migration. Those mainly responsible for migration are rulers who endanger the future of their own citizens for their own greed for power," Yıldırım said.

He said that empathy is needed. "We opened our doors to people displaced by civil war and terrorism. This was what we were supposed to do. Europe, unfortunately, sees migrants as a security issue and is concerned for their security. If you build walls, you cannot see who these people really are. We shouldn't darken their future, we should inject them hope for the future," he said.

Yıldırım also dismissed the negative view of refugees and migrants and the argument that they cause unrest and affect the economy. "Studies contradict this. They are not involved in crime as much as is claimed," he said, adding that a good management of migration flows can even benefit the host country. "Keep in mind that the United States and Europe were shaped by migration in the past," he said.

The prime minister said the Directorate General of Migration under the Interior Ministry would be the sole authority on migration as part of Turkey's efforts to improve work for migrants and refugees.

"We provide accommodation and all services to refugees, from health to education. We offer education for 612,000 refugee children and increased the schooling rate to 65 percent this year from 30 percent in 2016," he said. Yıldırım also criticized the EU for giving insufficient financial aid to refugees. "We reached an agreement on supplying 6 billion euros and a tranche of 3 billion euros in aid was supposed to be delivered by the end of 2017. Yet, they have only delivered 899 million euros so far. Under these circumstances, this total amount will likely not be delivered within some six years. Still, Turkey, with its own resources, will continue embracing suffering people," he said. Yıldırım also said that some 75,000 Syrians returned home from Turkey as life returned to normal in some parts of Syria and that returns would increase once "an atmosphere of peace prevails across Syria."

Training Syrian health care personnel to help their compatriots is one of the projects to help refugees who encounter many obstacles in Turkey, one being the language barrier. Some 617 Syrian health care workers, including doctors and nurses, have begun to work at refugee health centers across Turkey after they underwent a six-week training course organized by the Health Ministry and the EU. All are medical professionals who had to flee Syria due to the ongoing conflict. In the western city of İzmir, 134 Syrians, including 67 doctors, were trained and now work at a clinic exclusively for refugees. Speaking to Anadolu Agency (AA), Bediha Salnur, the head of the health authority, said their Syrian "guests" already have access health services but they sought to "make them feel more comfortable" with the health staff from Syria.

Noor Delani, who took shelter in Turkey five years ago, says she is happy to don a white coat again. "I immediately applied when I heard they were looking for Syrian doctors. I am grateful to Turkey for giving me the opportunity to return to my profession. My patients also like having a Syrian doctor," she told AA.