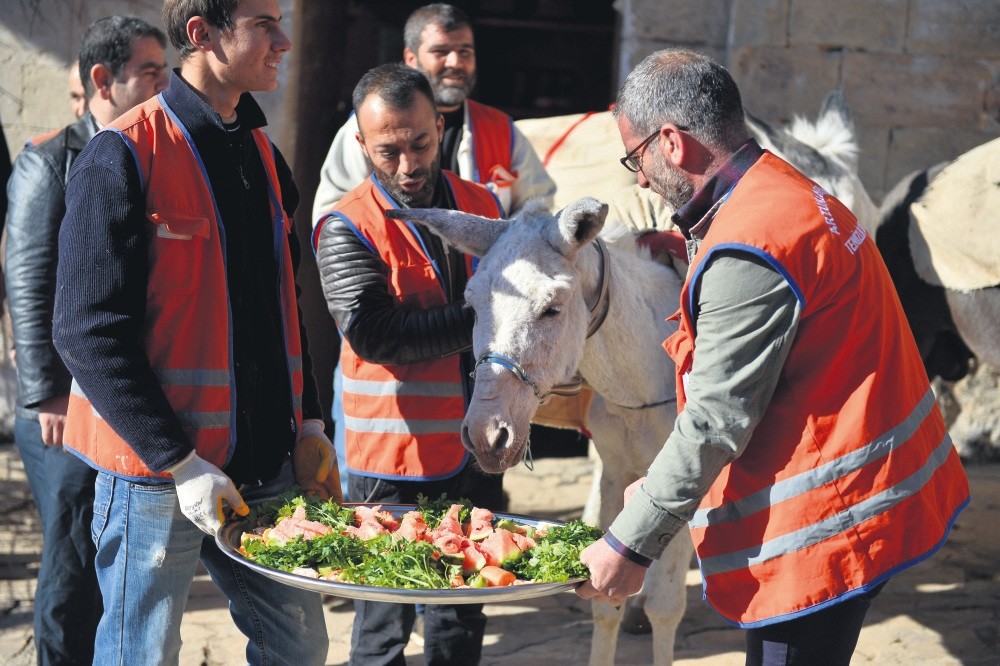 Colleagues feed the donkeys in the ceremony.
by Compiled from Wire Services Dec 16, 2017 12:00 am

After eight years of scaling the narrow, steep streets of Artuklu, a historic district in the southeastern province of Mardin, three donkeys formally retired as garbage collectors in a ceremony Friday.

Instead of birthday cakes reserved for their two-legged colleagues, Çari, Dara and Reşo were presented with watermelons and vegetables by fellow workers as they were paraded with red ribbons tied to their saddles as classical music blared from loudspeakers in front of their stables.

Donkeys loaded with baskets are the only way to enter the narrow streets in Mardin that even small pickups cannot access. The local municipality employs 40 donkeys for the job.

After their retirement, the donkeys will be moved to a local animal shelter with food for life as a bonus.

Kadri Toparlı, head of the cleaning department at the municipality, said they hired the donkeys when they were 5 to 6 years old and they were fit for the jobs for "up to nine years." "Animal health staff at the municipality picks the donkeys required to be retired every year and we place them in our municipality's shelter," he said. "They won't have pensions, but they will have their freedom. We will take care of them throughout the rest of their lives," he said.

Toparlı said the donkeys work between 6 a.m. and 11 a.m. and they take the "utmost care" of the animals, who undergo weekly health checks.