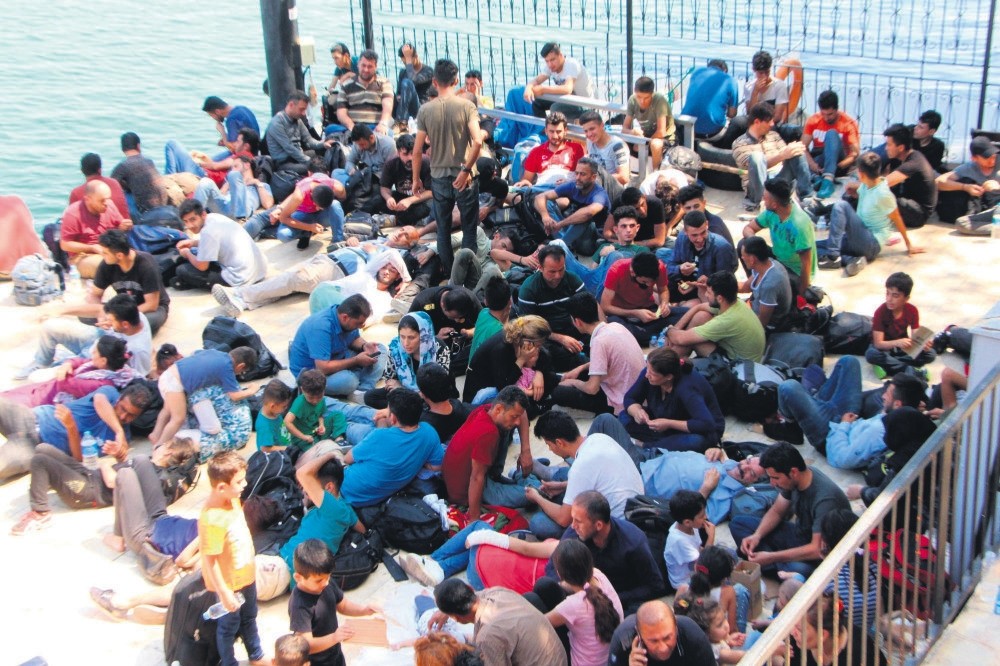 Syrian migrants rest on the port after they were rescued from a sinking boat by the Turkish Coast Guard in the Seydikemer district of Muu011fla, Turkey, July 2017.
by Daily Sabah with AA Jan 04, 2018 12:00 am

Deaths of illegal migrants trying to reach Europe plummeted, but the latest figures show that more than 50,000 migrants were intercepted on Turkey's borders in 2017, which is still lower than previous years

The year 2017 was relatively calm for Turkish authorities tasked with fighting illegal migration but the phenomenon still lingers for the country serving as a bridge between Asia and Europe.

Deaths of migrants who risk their lives aboard dinghies in the Aegean Sea significantly dropped while the numbers of those trying to reach Greece via Turkey were far lower than 2016 and previous years. Still, more than 50,000 migrants - as well as dozens of fugitives linked to the terrorist groups - were stopped on or near the country's western borders.

Figures by Anadolu Agency (AA) show more than 4,250 undocumented migrants and refugees who were trying to reach Europe through the country's southwestern shores as well as over 100 smugglers helping them were apprehended in 2017. Close to 200 Gülenist Terrorist Group (FETÖ) suspects, who were trying to escape to Europe using illegal routes, were also apprehended.

Turkey has been a major route for refugees trying to cross into Europe, especially since the beginning of the civil war in Syria about seven years ago. In total, 4,272 undocumented migrants from Syria, Myanmar, Afghanistan, Pakistan, Palestine and Iraq were caught along with 105 smugglers in 2017, according to government sources. These figures are largely confined to Muğla, a southwestern province popular among migrants for its proximity to the Greek islands. The smugglers initially take migrants from the touristic sights of the province to forests and shores. Some migrants end up paying around $1,500 to smugglers. Turkish police, coast guard and gendarmerie are striving to prevent deaths of migrants at sea. Bodrum, an Aegean resort in the province, is being patrolled day and night by security units as it is one of the closest links to the Greek island of Kos.

Separately, nearly 50,000 migrants and refugees were detained in northwestern Edirne province last year. Of those, 15,000 migrants were from Pakistan, 12,000 others were from Afghanistan and 10,000 were from Syria. In the last 10 years, Edirne has seen a rise in migrants from Pakistan, Syria, Palestine, Myanmar, Afghanistan, Morocco, Iran and Iraq. In 2017 alone, 50,000 migrants and refugees from 50 different countries have been held by Turkish security units. There has been a 60 percent increase in migrant flow since 2016; the number was 31,000 in 2016. The Doğan News Agency reported that some 6,000 migrants intercepted in Edirne were those "pushed back" by Greece. Some migrants had claimed that Greek security forces beat and robbed them of their possessions before forcing them to turn their boats back to Turkey on the Evros (Meriç) River.

Other figures show undocumented migrant deaths in the Aegean Sea plummeted 85 percent in 2017 compared to 2016. A total of 806 people lost their lives in the Aegean in 2015, while 434 died in 2016, and 61 in 2017. In recent years, hundreds of thousands of people have tried to make the short but perilous journey across the Aegean Sea to reach northern and western Europe. Although the Turkish Coast Guard has rescued thousands of people, a countless number of refugees have died trying to undertake the treacherous voyage. In March 2016, Turkey and the EU signed a deal to discourage irregular migration through the Aegean Sea by taking stricter measures against human traffickers and improving the conditions of some 3 million Syrian refugees in Turkey. Since then, the number of refugees detained crossing the Aegean Sea between Turkey and Greece has considerably fallen.