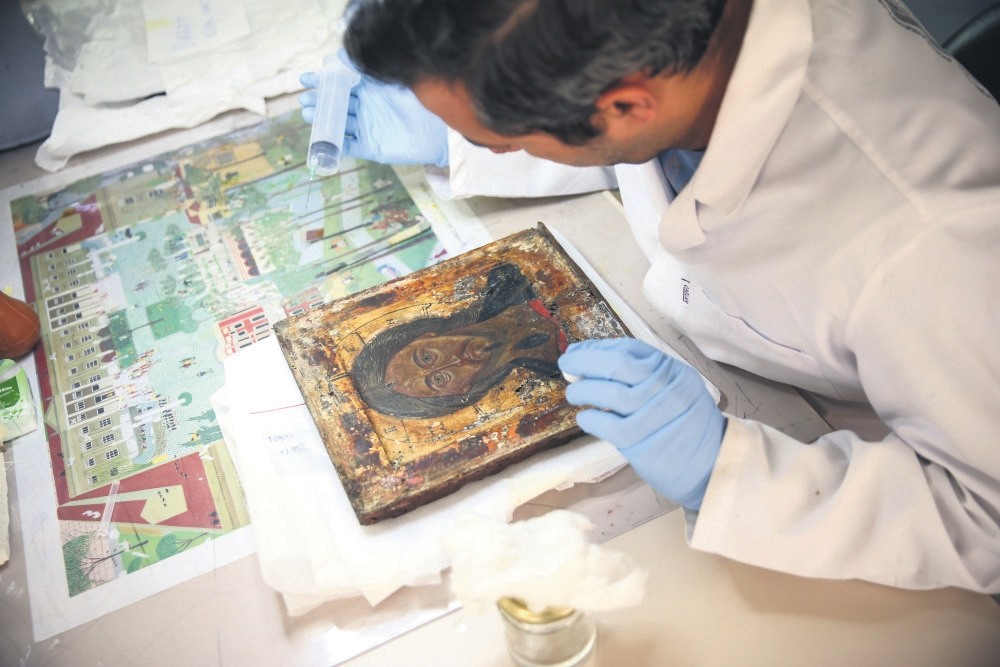 Brought from churches across Turkey to Istanbul's iconic Hagia Sophia, historic icons are now undergoing restoration before they are put on display at a new museum.

Hagia Sophia, originally a Byzantine basilica converted into a mosque, and now a museum, is perhaps the best-known landmark of the city, but few people are aware that it also holds a vast array of icons kept in a gallery inside the historic site.

In a laboratory inside Topkapı Palace, walking distance from Hagia Sophia, experts are working relentlessly to keep this Christian heritage alive. Meticulously cleaning the small icons, some more than 300 years old, experts strive to restore them to their former glory.

So far, 45 out of a total 452 icons have been completely restored and authorities plan to put them on display in a separate museum.

Ali Osman Avşar, director of the laboratory, said the icons were in a state of disrepair when they were brought to their lab.

"Our experts analyzed their paints and the wood they were painted on before beginning the conservation work. They applied fumigation to clear them of harmful bugs and bacteria," he told Anadolu Agency (AA).

The icons were kept in Hagia Sophia Museum, but Avşar said they are planning to set up a new museum for them, citing the limited space in Hagia Sophia.

Professor Sema Doğan from Hacettepe University is among the experts working on the conservation and restoration project run by the Culture and Tourism Ministry since in 2015.

She said they sought to keep the icons in their original state through "right application" and that experts were exchanging information with Italian restoration experts.

"It is a lengthy project, as it takes time and requires a patient approach so as not to damage the icons. These objects are very important for the Christian world," she said.

"We classify them with regard to their types and aim to release a publication on icons after we restore them to their authentic color and details," Doğan said.