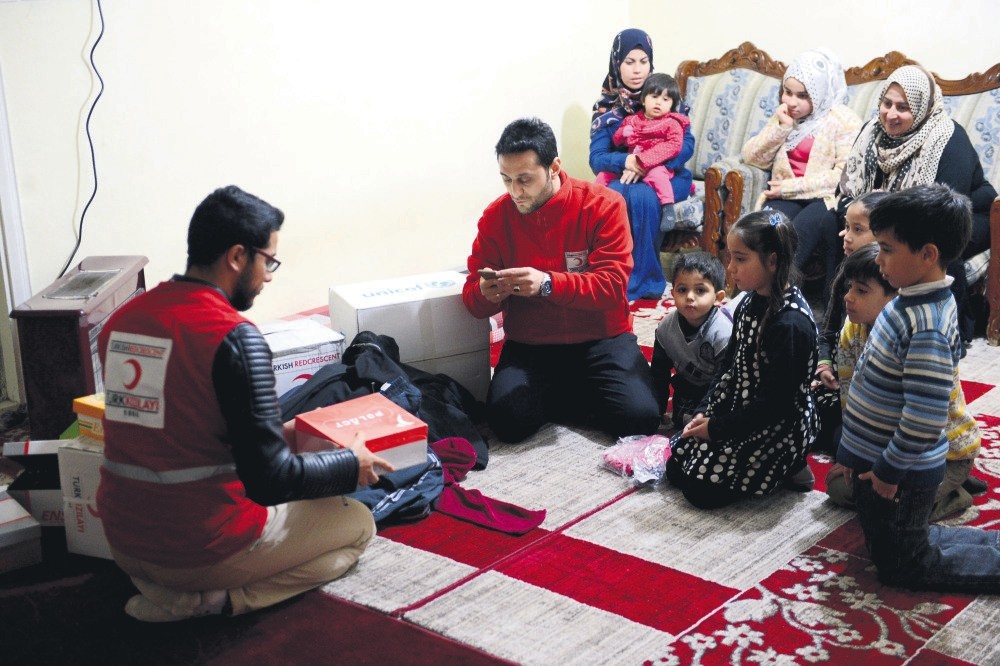 Turkish Red Crescent staff deliver clothes and shoes to al-Ahmad family in the city of Kilis. The family of nine, including quintuplets, relies on aid as the parents are unemployed.
by Daily Sabah with DHA Jan 09, 2018 12:00 am

Official figures indicate that almost half of the 3.4 million Syrian refugees settled in Turkey are concentrated in cities bordering their homeland, while Istanbul also remains a major hub

March in Syria will mark the seventh year of the start of an uprising that turned into an all-out civil war. Since the conflict started, Turkey has been the first destination for the majority of displaced people seeking a safe haven. The latest figures show about 1.5 million of the 3.4 million refugees from Syria live in Hatay, Gaziantep, Kilis, Şanlıurfa and Mardin, which border Syria. Istanbul, the country's most populated city with 14.6 million residents, has 537,829 refugees.

Refugees from Syria account for about 4.29 percent of the total population and Turkey hosts the largest refugee population from Syria in the world, something Ankara repeatedly boasts about.

Ankara also criticized the international community for not funneling sufficient humanitarian aid for refugees in Turkey and not taking in more refugees.

In Kilis, which was nominated for a Nobel Peace Prize two years ago for hosting more Syrian refugees than its actual population, more than 131,000 Syrian refugees reside. The population in the city located on the border is slightly above 130,000.

After the conflict broke out in Syria, the city came under fire by the terrorist group Daesh on the other side of the border and was a gateway for a Turkey-backed offensive against the group by the Syrian opposition in 2016. Statistics show that number of refugees account for 29 percent of population in Hatay, another border city, while it accounts for 23 percent of the population in Şanlıurfa. Rates are lower in Gaziantep and Mardin, two other border cities where Syrians make up 17 percent and 11 percent of the population, respectively.

Bayburt, one of the least populated cities in Turkey that is located in the country's northeastern region, took the title of the city with the least refugees from Syria at just 57.

This can be explained by its distance to the border as it is followed by Artvin, Bartın and Gümüşhane, other cities in the northernmost Black Sea region.

Antalya, a Mediterranean city popular among holidaymakers from all around the world, also hosts a significantly low number of only 563 refugees from war-torn Syria.

The choice of border cities among the refugees stems from the fact they host a lot of relatives of Syrians because Syria was once ruled by the Ottomans. Others choose border cities to stay for a quicker return home in case of improved security. Indeed, as Turkish authorities announced in December 2017, some 75,000 Syrians returned to their hometowns liberated from Daesh by the Syrian opposition.

Operation Euphrates Shield, launched by the Turkish army in August 2016 to support the Syrian opposition, had liberated an area of 2,000 square kilometers from Daesh.

More than 5 million people fled from their homes to other countries after the war broke out in Syria and their foremost destinations were countries on the immediate borders of their country such as Lebanon, Turkey and Jordan.

Among the three countries, Turkey is praised most by the international community for its modern refugee camps and exemplary hospitality toward refugees that is generally linked to the shared history of the two countries.

Turkey has set up camps in the cities of Gaziantep, Şanlıurfa, Hatay, Kilis, Mardin, Adana, Malatya, Adıyaman, Kahramanmaraş and Osmaniye for the refugees. Yet, only a small fraction of refugees choose to stay at the camps, while some of them have bought residences or are renting all across Turkey.

Currently, 227,947 Syrians live in camps in those cities according to the data by the state-run Disaster and Emergency Management Authority (AFAD).

Though they are given access to all services, such as free debit cards to do shopping, grocery, health services, and education in the camps, most refugees prefer living on their own. Turkish charities have been at the forefront of a string of campaigns to supply steady humanitarian aid to those living outside the camps. With no end in sight to the conflict, some refugees plan to settle in Turkey permanently by setting up businesses.

With the increase in the number of refugees in the past few years, Turkey has started handing out work permits for the refugees as well. Thousands, meanwhile, view Turkey as a gateway to Europe and occasionally make potentially deadly journeys to Greece via the Aegean Sea.