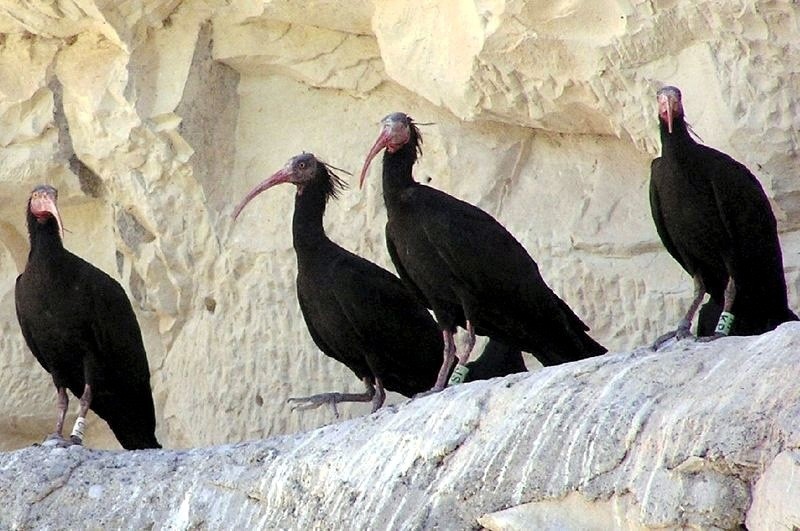 The number of endangered northern bald ibis in Turkey have almost multiplied by six in the past 16 years, thanks to conservation efforts by the Ministry of Forestry and Natural Resources, and the Ministry of Environment, reports said Thursday.

According to a statement released by the ministry of forestry, the number of northern bald ibis, also known as Geronticus eremita, increased to 240 in 2017 from just 42 in 2001.

In cooperation with the ministry of environment and the ministry of forestry, a semi-wild colony was established in southeastern Şanlıurfa province's Birecik district to prevent the extinction of the northern bald ibis.

Here, the birds were put under protection after the breeding season to prevent migration, which usually takes place in July or August.

The Minister of Forestry and Water Works, Veysel Eroğlu, said that the ministry started using tracking devices on birds in 2008 to observe their migration patterns.

"The fact that two of the five northern bald ibises set free for migration returned to Birecik has proven that they can survive in nature again," Eroğlu said, adding that the satellite tracking devices enable experts to identify problems encountered by the endangered species and find solutions accordingly, and will also shed light on their preferences on where they would like to live.

The conflict in Syria had also negatively affected and continues to pose a threat to the livelihood of the ibis, which is revered as a symbol of abundance and spring in Turkey.

A visitor's center was also established to enable visitors to watch the rare birds and explain the significance of Euphrates River and Birecik for their survival. The visitors are also able to watch the birds online.

The northern bald ibis lives in barren, rocky or semi-desert habitats near wetlands with running water.