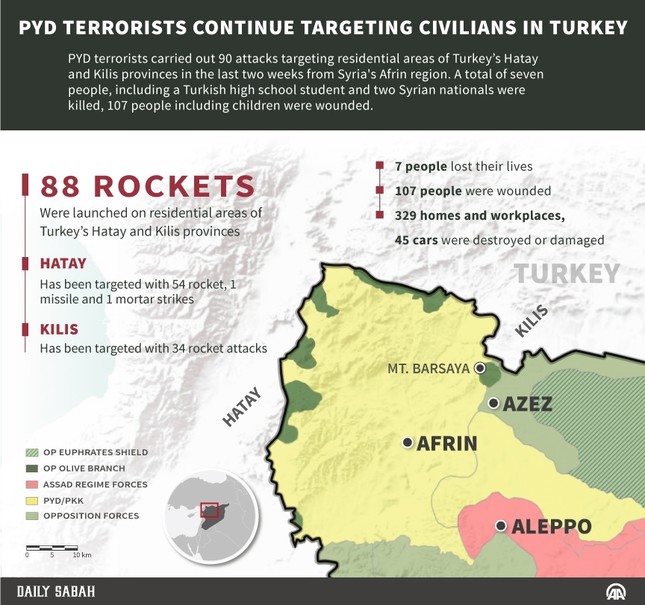 The terror group carried out 90 attacks in the provinces in the last two weeks from Syria's Afrin region since Turkey launched Operation Olive Branch with the aim of clearing the terrorists from Afrin.

Out of the 90 attacks, 88 were rocket attacks, one was a missile attack and another was a mortar shell directed at civilians in Turkey; 34 of these attacks took place in the city center of Kilis, while 56 were carried out in Hatay's Reyhanlı, Hassa and Kırıkhan districts.

In the attacks on Reyhanlı, 320 houses or businesses were damaged while 33 vehicles became unusable.

Kilis was hit with 34 rockets, killing Muzaffer Aydemir, 72, and Syrian Tariq Tabbaq, 28; 39 others were wounded.

The attacks on Kilis left nine houses, a mosque and 12 vehicles destroyed.

Since the start of the operation, the PYD/PKK has carried out cross-border attacks on Turkey by firing rockets on civilian neighborhoods.

Turkey's Presidential Spokesperson Ibrahim Kalın told the Daily Sabah that the while Turkish forces immediately respond to such attacks, they can't respond to attacks from Afrin because the terrorists deliberately launch the rockets from residential areas.

Kalın said that Turkey carries out the operation with utmost care to avoid civilian casualties, but PKK's acting leader Murat Karayılan ordered from PKK headquarters in northern Iraq's Qandil Mountains that the terrorist group should step up propaganda of civilian casualties to tarnish Turkey's image globally.