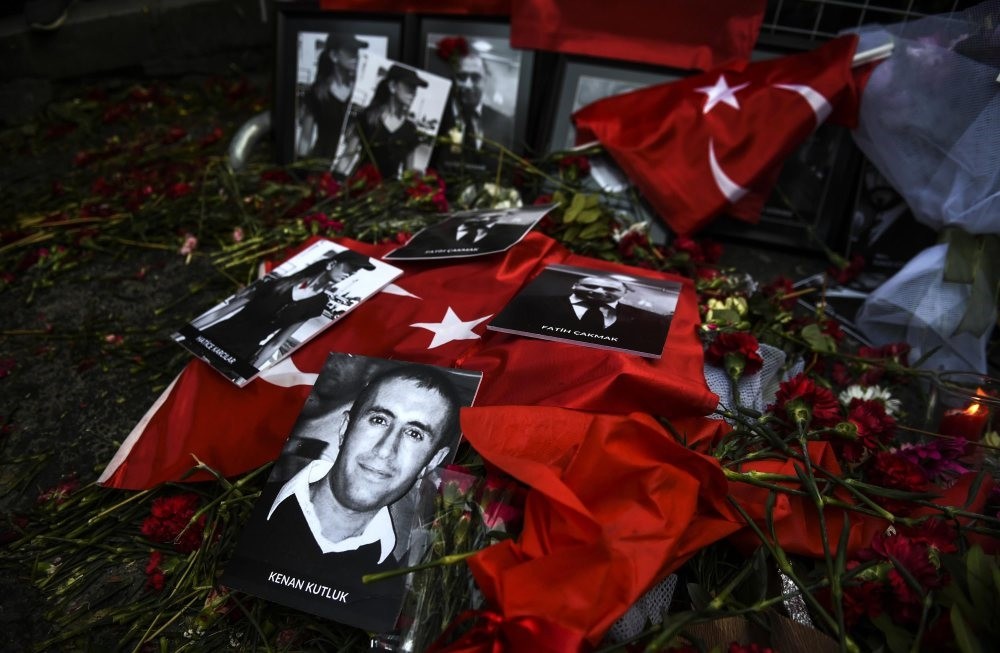 Pictures of victims lie on flowers and flags in front of the Reina nightclub where a Daesh attack killed 39 people during New Year celebrations last year.
by Daily Sabah Feb 07, 2018 12:00 am

Turkey's state-run Presidency of Religious Affairs (DİB) published a detailed report that explains Daesh's destruction of global image of Islam. In the report, the DİB stressed that Daesh's activities tarnish the concept of jihad by enslaving people, spreading violence and triggering Islamophobia. "Daesh and similar Islamic-looking terrorist organizations have given the entire world a negative message on Islam," the report said. The DİB underlined in the report that the true meaning of jihad is taming the human soul, explaining real Islam and warning the authorities if they do anything wrong besides fighting the enemy.

"The fact that Daesh violated many rights and committed rape on the basis of jihad, which is not possible in any way to be accepted as legitimate, they corrupted an Islamic concept like jihad in the direction of their interests," it explained.

The religious body criticized the enslavement activities of Daesh and highlighted that slavery is an inhuman concept that everyone agreed on, including Muslims. "This is an attitude that proves that Daesh does not understand the basic aims and ideals of Islam," the directorate said.

Furthermore, the religious affairs body underlined that Daesh commits excessive violence including torture, torment and execution, which is neither Islamic nor humane. "Beyond Daesh's individual tortures, it also commits mass killings and genocide which is a crime against humanity to which Islam could never consent," the report stressed.

"The unpleasant images [and] violent scenes published in the media almost every day cause the spread of Islamophobia all over the world," the report said, adding that such terrorist groups using Islam as the pretext of spreading violence cannot be identified with any religion, above all Islam. DİB also criticized the negative effects of inhuman activities of Daesh on the global Islamic image that is tarnished by rising Islamophobia.

Muslim-majority Turkey is among the countries branded "infidel" by the terrorist group, which adheres to a warped ideology justifying acts of terror by its own version of Islam. Turkish security forces have been involved in a long-running campaign to thwart Daesh attacks. More than 300 people have lost their lives in Daesh-claimed attacks in Turkey, where the terrorist group has targeted civilians in suicide bombings, and rocket-and-gun attacks.

The country's efforts against Daesh made it a primary target for the terrorist group, which has carried out numerous gun and bomb attacks targeting security forces and civilians. This includes the country's deadliest terrorist attack, which killed 102 people and wounded 400 others in a twin suicide bombing at a peace rally in Ankara on Oct. 10, 2015. Turkey has also deported more than 5,000 Daesh suspects and 3,290 foreign terrorists from 95 countries in recent years and has dismantled several terrorist cells that provided logistical assistance in Syria and Iraq for plotting attacks inside the country.

DİB fights the exploitation of Islam by terrorists through raising awareness amid the faithful against the radicalization of youth by Daesh and similar groups, Friday sermons, booklets and reports published in multiple languages. Last year, it published a similar report on the Gülenist Terror Group (FETÖ), which is blamed for the July 15, 2016 coup attempt in Turkey that killed 249 people. Like Daesh, FETÖ recruited its followers by brainwashing them through religious messages they exploited for their own benefit and did not question leadership or orders, the previous DİB report says.