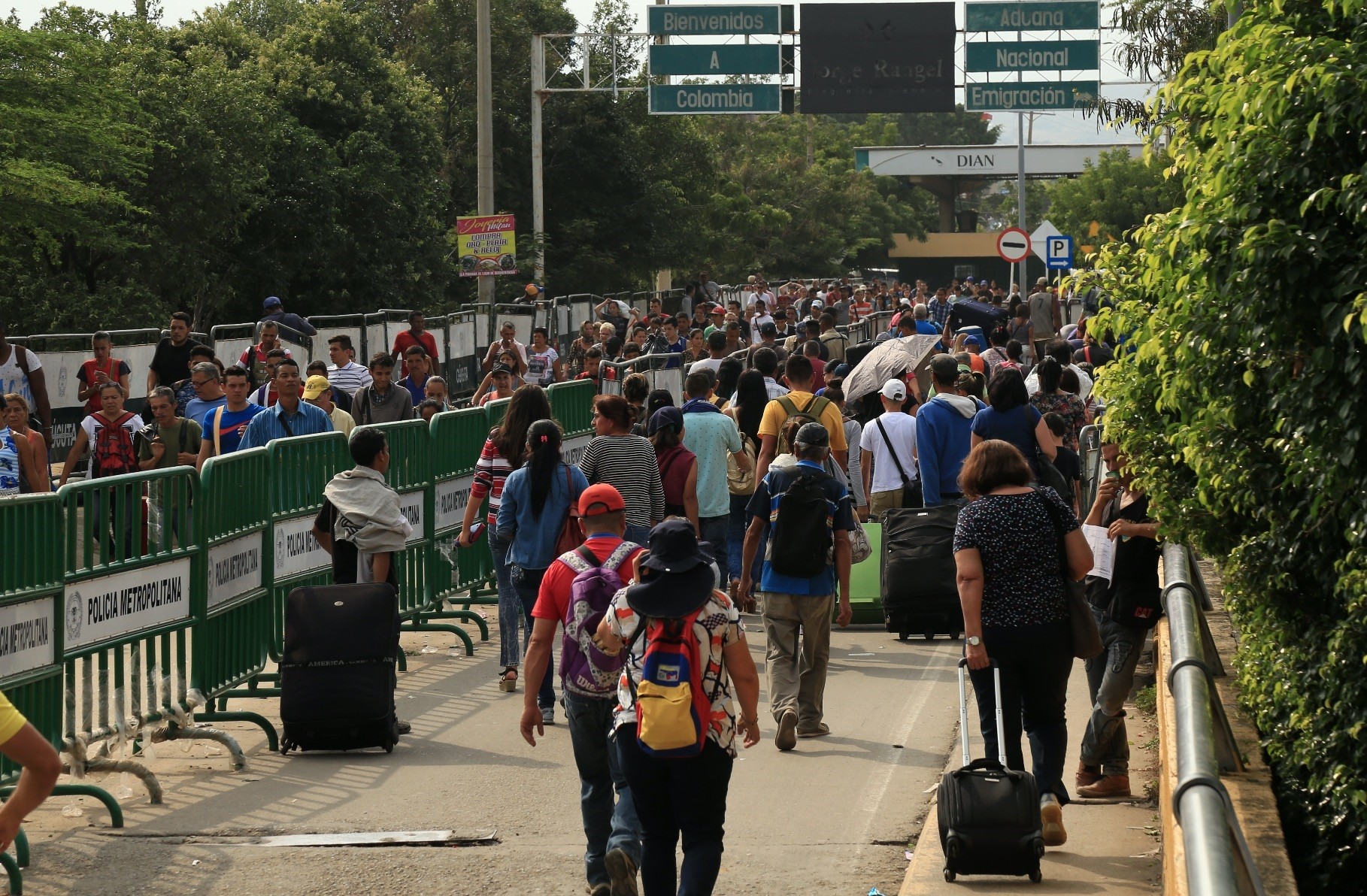 Venezuelan refugees cross Simon Bolivar bridge connecting Colombia and Venezuela. Colombia has seen a surge in number of refugees in the second half of 2017.
by Compiled from Wire Services Feb 20, 2018 12:00 am

Praised for its hospitality and management of refugees, Turkey, home to millions of refugees from Syria, is a role model for Colombia, which strives to tackle a similar situation of economic migrants from cash-strapped Venezuela

Colombia has looked to Turkey concerning a sudden influx of migrants from neighboring Venezuela. Victor Bautista, head of the Colombian border authority, told Anadolu Agency (AA) that they are drawing from the Turkish experience in tackling the matter, citing a visit by a Colombian delegation to Turkey last year to observe what the country did for refugees from war-torn Syria. Since a 2011 uprising evolved into an all-out civil war in Syria, its northern neighbor Turkey saw an influx of thousands of displaced people taking shelter in its border towns. Today, the country has more than 3.5 million Syrian refugees, the largest Syrian refugee community in the world.

Colombia, meanwhile, saw a 62 percent increase in the number of Venezuelans living in the country, rising to more than 550,000 in the second half of last year. Venezuela is in the throes of a protracted, severe recession that has cast many people into abject poverty. That, combined with hyperinflation in the oil-rich country, has led to the mass exodus.

Speaking to AA in Cucuta, a border town flooded with Venezuelan migrants, Bautista said what Turkey has done for Syrians - as they saw during the 2017 visit - set an example for what they could do. "We applied some services Turkey provided for refugees already such as a refugee management center, registration of refugees, health services and strategy to cope with emergencies such as a disproportionate rate of refugees to local population and a socio-economic shock for the local population upon the sudden surge of refugees. The situation is complicated and Colombia needs to adapt fast. The Turkish model is a really advanced and peculiar one based on Turkey's past experience," he said. Located between Asia and Europe, Turkey has been a hub for refugees and migrants seeking to cross into Europe or a place of residence for those from poorer countries for decades.

Bautista said a group of experts from Turkey's Disaster and Emergency Management Authority (AFAD), the state-run agency overseeing refugee needs, is expected to visit Colombia in the coming days to help them cope with the situation. "AFAD and other Turkish agencies are rather successful in managing a refugee crisis and we aim to accomplish the most efficient response to the crisis and to be more helpful [to migrants]," he said.

The Turkish Cooperation and Coordination Agency (TİKA), an overseas development aid agency run by Ankara, coordinates Turkish-Colombian relations on handling the influx of economic migrants. "TİKA is a great partner and contributes to our strategic vision in the refugee crisis," Bautista said. He acknowledges that Colombia was not very good in coping with such crises in the past, but it can now be on par with other countries in successfully managing this crisis.

In seven years, AFAD spent more than $5.5 billion for Syrian refugees in Turkey while the government spent another $16.3 billion for health services. Turkey has also invested $15.4 billion in their education. The aid, however, was not confined to those staying in Turkey, and some $1.6 billion was spent on humanitarian aid in northern Syrian towns liberated from Daesh by the Syrian opposition backed by the Turkish military in 2016. In addition, the Turkish Red Crescent and other charities have spent another $2.05 billion on Syrian refugees.

AFAD houses 227,894 Syrian refugees at some 21 accommodation centers, including refugee camps and modern prefabricated housing units. The rest either live in houses they rent or bought or in homes provided by charities throughout the country. Modern refugee camps provide refugees access to basic services, including education and vocational training courses. Education is the main concern for refugee children make up the majority of Syrians in Turkey. Turkey has so far reached out to 612,603 Syrian children in a bid to provide them with education. They attend public schools, schools run by charities and schools set up at some refugee camps.

The influx of refugees to Turkey and Venezuelan economic migrants to Colombia bear some parallels. Both countries are accessible to refugees and migrants, and many of them already have family in the respective countries. "We have historic and social ties with Venezuela. If the refugee flow increases, we believe that almost 90 percent of refugees would prefer Colombia and the rest would go to Brazil," Bautista said. As the number of Venezuelans crossing the border increases, including unattended children who get free vaccinations and education, Colombia estimates it would need $30 million to build an assistance center to give migrants a temporary place to stay before deciding their next move.

Last Thursday, President Juan Manuel Santos said he would institute stricter migration controls, temporarily suspend new daily entry cards and deploy 3,000 new security personnel, including 2,120 more soldiers, along the 2,219-kilometer border with Venezuela. About 1.3 million Venezuelans have registered for the special migration card that allows them to cross the border by day to buy food and other products that are scarce in their country. While Venezuelan professionals like doctors and engineers have found work in big cities or in Colombia's oil industry, most of the poor have settled in Colombian border towns. Santos said the country needs international aid to help cope with the humanitarian crisis. "I appreciate the offers of financial and other aid from the international community. We are fully prepared to receive them. We need them because, unfortunately, this problem gets worse by the day," Santos said at an event in Bogota.

Bautista said the measures announced by the president helped to decrease the number of crossings from Venezuela. He said the numbers of crossings have been speculative as some people were involved in the secret trade of Border Movement Cards issued to migrants. He said they currently have more than 80,000 applications for a special residence permit for migrants, which was introduced among the measures Santos announced. He said these would better help regulate the influx.