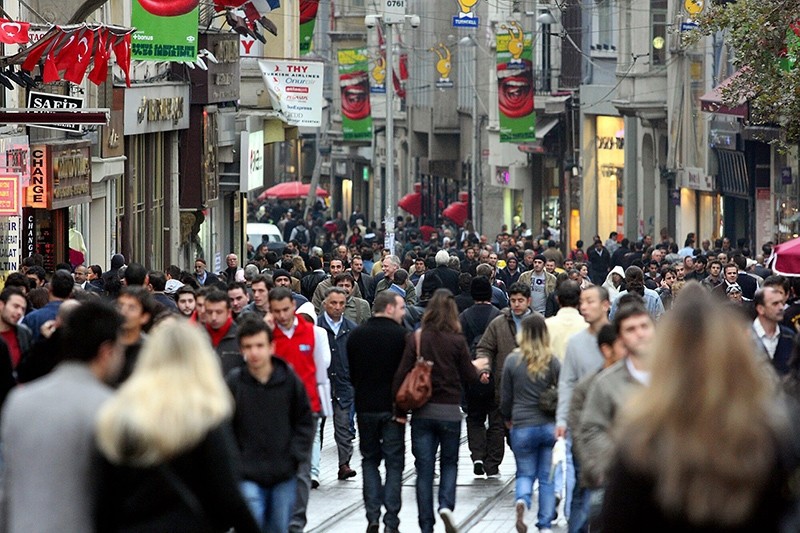 In this undated file photo, people walk on the Istikal Street, one of the busiest streets in Istanbul, Turkey.
by Anadolu Agency Feb 21, 2018 12:00 am

Projections published by a state-run agency Wednesday indicate that Turkey’s population will rise to more than 100 million in two decades, but the median age will also increase

Additionally, if current trends continue, life expectancy and median age will also increase, TurkStat warns. The median age of the population, which is expected to be 32 this year, will increase to 38.5 in 2040, and 45 in 2080, according to the figures. The proportion of the population 65 and above will also steadily increase. It will rise from a projected 8.7 percent in 2018 to 16.3 percent in 2040, and to 25.6 percent in 2080. Experts link these projections to a decline in fertility and the availability of new treatments that increase longevity.

Meanwhile, Turkey's most populous city of Istanbul with 15 million people, will climb to 16.3 million in 2023 –the 100th anniversary of the founding of the Republic of Turkey. The other two cities in the top three –Ankara and Izmir – will have 6.1 million and 4.6 million people by 2023, respectively. TurkStat added that Turkey's population in 2023 is expected to be 86.9 million.

The population has surpassed 80 million to reach its highest level ever, TurkStat said on Feb. 1. At the end of 2017, the country's population was 80.8 million, with an annual growth rate of 1.24 percent, it said. Official data showed the population rose by nearly 1 million, up from the previous year's figure of 79.8 million.

The proportion of the working age population will also gradually decrease, according to TurkStat figures, down to 64.4 percent in 2040 from the projected rate of 67.8 percent this year. Similarly, the amount of those aged 0 to 14 will decline to 19.3 percent in 2040.

The population growth may be good news for the government, which has been striving to address the problem of the aging population. A set of incentives by the government for larger families and the advice from President Recep Tayyip Erdoğan to newlyweds to have at least three children may have played a role in the growth. In a bid to have more women in the workforce and to help workingwomen start families, the government announced that monthly daycare support for women with children aged between 2 and 5. The government already pays benefits to parents per child with plans to gradually boost the amount and offer more cash to families with more children.