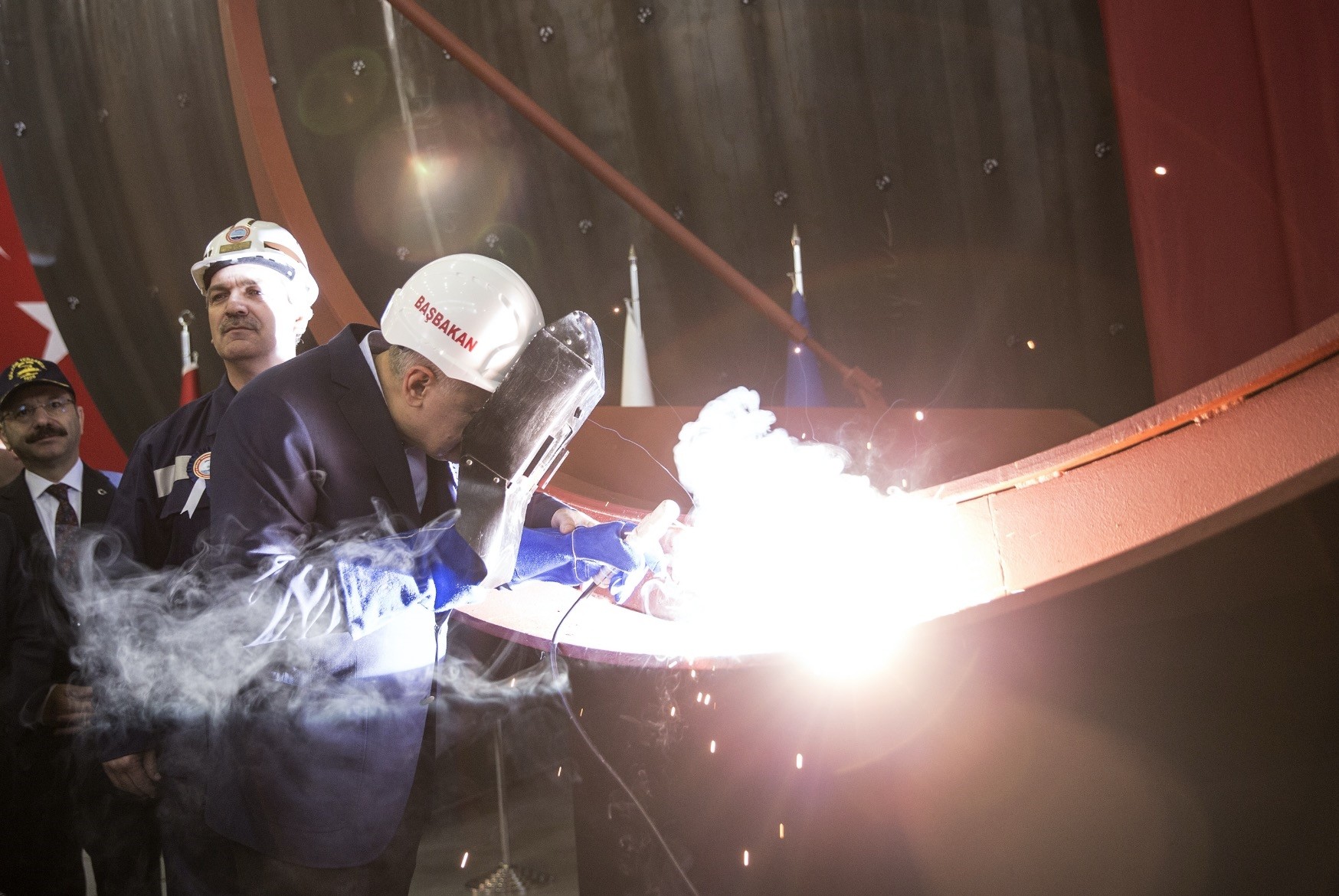 Prime Minister Binali Yu0131ldu0131ru0131m, a former marine engineer, officially launched the construction of the submarine by welding.
by Compiled from Wire Services
Feb 26, 2018 12:00 am

Turkey's drive to keep its defense industry ‘national and domestic' continues with the construction of a third submarine, which is being built in cooperation with a German company. Prime Minister Binali Yıldırım inaugurated the project Sunday

Expanding its locally-made arsenal, Turkey officially launched the construction of Murat Reis, the third in a new submarine fleet made with local resources and the assistance of a German company. Prime Minister Binali Yıldırım joined dignitaries at the inaugural welding of the submarine in the Gölcük shipyard in northwestern Turkey Sunday.

The country launched the project in 2009 after the Defense Industry Undersecretariat signed a deal with a foreign and local consortium for construction of submarines. Equipped with modern weapons technology, the submarines aim to boost Turkish navy's operations in the Aegean and the Mediterranean Sea. The country started the production of the first submarine of the project, TCG Pirireis, in 2015. It is estimated that the construction of three submarines is to take an average of 61 months. Germany's multinational conglomerate ThyssenKrupp is the main contractor in the project. The subcontractors are prominent Turkish defense firms including ASELSAN, Havelsan, Ayesaş, Milsoft, Koç and STM. Turkey's leading state-run science body TÜBİTAK also contributes to the project.

Turkey has been heavily investing in the defense industry and has substantially increased the number of defense projects over the last 15 years, while also increasing the rate of domestic production whereby local resources are used in the development of defense projects and equipment. The number of defense projects, which was 66 in 2002, has now increased to 600, and the size of these defense projects has reached $60 billion. External dependency, which was around 80 percent 16 years ago, has also rapidly declined with the nationalization of projects. The use of domestic resources has increased from 25 percent to more than 60 percent. Turkey's defense industry has around $6 billion production and $2 billion export capacity.

Speaking at the welding ceremony for Murat Reis, which is named after a famed Ottoman admiral, Prime Minister Binali Yıldırım, who worked as a marine engineer before his political career took off, said he was excited to inaugurate a new addition to the Turkish navy. Citing the rapid development of the Turkish defense industry over the past 15 years, Yıldırım said they invested more than $35 billion in the defense industry since 2003. "The industry also boosted its export capacity to over $2 billion," he added.

The prime minister said that the country's defense industry executive committee recently approved projects worth $10 billion for a new set of projects for land, air and maritime defense. "The Turkish naval forces are now capable of eliminating all kinds of threats against Turkey," Yıldırım emphasized.

He said Murat Reis will be a member of a six-submarine fleet and the project will also help in improving the state of the Gölcük shipyard, the main shipbuilding hub in Turkey. Yıldırım also urged companies to speed up the construction process "at a time of risks Turkey currently faces at sea," referring to "conspiracies in the Aegean and Mediterranean Sea."

Turkey and Greece have been at odds over territorial waters for decades and tensions flared up recently over the Kardak islets in the Aegean. Turkish and Greek coast guard vessels collided off the islets earlier this month, sparking a crisis between Athens and Ankara. Turkey has accused Greece of "making dangerous moves" by violating territorial waters after the incident. In the Mediterranean Sea, Turkey faces a challenge from the Greek-controlled part of Cyprus, which unilaterally tried to exploit a natural gas exploration zone recently. Turkey says the Turkish Cypriot-controlled part of the island also has rights to the zone and Turkish warships blocked an Italian oil rig from reaching the zone earlier this month.