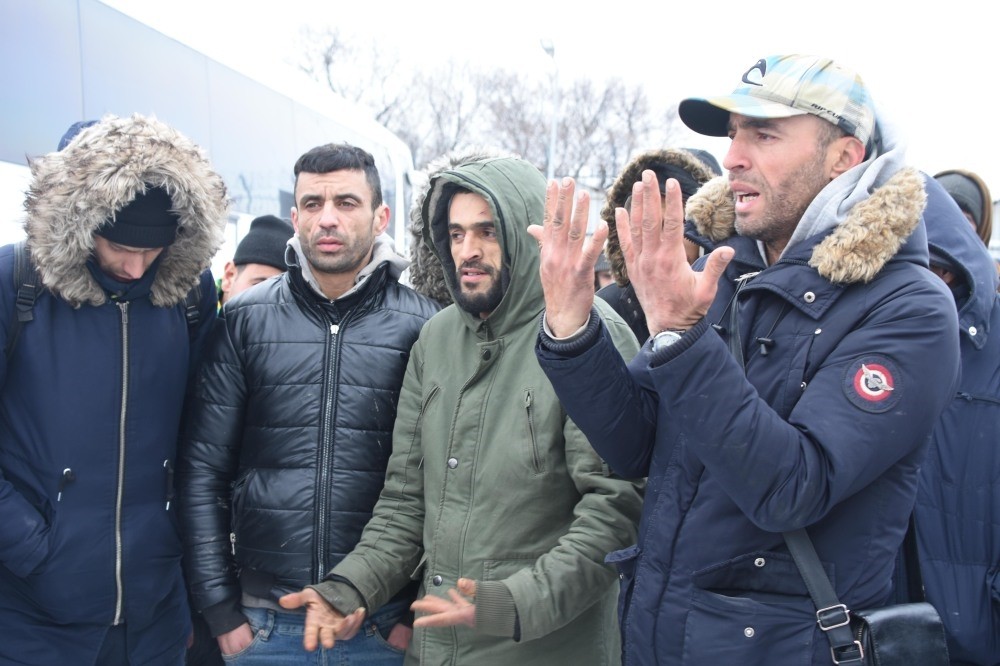 Palestinian migrant Qasim Amin (R), accompanied by other migrants, tells reporters their plight on the Greek side of the border.
by Compiled from Wire Services Mar 01, 2018 12:00 am

A group of migrants found on the Turkish-Greek border said masked security officials on the Greek side pushed them back to Turkey, in the latest accusation Greece faces for the illegal practice

As Europe seeks a way to curb the flow of refugees, Greece, the continent's main gateway for migrants from the east, is accused again of illegal "pushback."

Some 29 refugees found on an islet in Meriç river between Turkey and Greece yesterday told their rescuers that they were first detained in Greece and then "masked" men they thought to be police or soldiers forced them to board boats back to Turkey.

Migrants, from Palestine, Syria, Algeria, Pakistan, Afghanistan, Iran, Libya and Bangladesh were discovered on the islet and some in the river, by soldiers patrolling an area off limits to civilians.

Rescue crews took them to safety while two of the migrants, who were about to freeze to death when found, were taken to a hospital in the border town Edirne. Search and rescue crews also combed the river for other possible victims.

Mustafa Belkasem, a 25-year-old Libyan migrant, said they secretly crossed into Greece five days ago but were captured there. "Police captured and jailed us for a while. Then, some men wearing uniforms and masks took us to military boats. They hit us and told us to keep quiet. They also seized our cellphones before leaving us (on the islet)," he told reporters. He added that he was not given any food while in detention.

Qasim Amin, a 27-year-old Palestinian migrant, said they were kept in "a disgusting prison" on the Greek side and was "beaten." "We were forced to stand in a cold, freezing place for hours. We had three more people traveling with us but I don't know what happened to them. I didn't see them again," he said.

Greece has long been the first destination for illegal immigrants setting out on a journey to Europe via Turkey, be them Syrians or nationals of remote Asian countries. Though it embraced refugees seeking permission to cross into other European countries, particularly Germany for the past three years, Greece has slowly become an unfavorable place for migrants due to its worsening attitude and horrid living conditions that are forcing migrants to return to Turkey.

Last year, dozens of migrants who entered the country with the hope of seeking asylum were found bruised and beaten near the Turkish border and claimed they were illegally deported back to Turkey. "Pushback" is an illegal practice under international conventions and Greece never acknowledged whether its security forces were involved in pushing back the migrants.

Turkish media outlets say Greece has "pushed back" some 4,000 illegal immigrants last year. Based on the accounts of the illegally deported migrants, Greek police officers are accused of confiscating valuable possessions of migrants and torturing migrants.

Turkey and the European Union signed a deal in 2016 to curb the illegal immigration through dangerous Aegean Sea route from Turkey to Greece. Under the deal, Greece sends migrants held in the Aegean islands they crossed from nearby Turkish shores and in return, EU countries receive a number of Syrian migrants legally. The deal, reinforced with an escalated crackdown on human smugglers and more patrols in the Aegean, significantly decreased the number of illegal crossings.

However, some desperate migrants still take better-policed land border between Turkey and Greece, especially in winter months when a safe journey through Aegean is nearly impossible aboard dinghies. Greece, which struggles to cope with the huge influx of migrants especially after a civil war in Syria displaced millions, is already criticized for decrepit conditions in refugee camps on its Aegean islands.