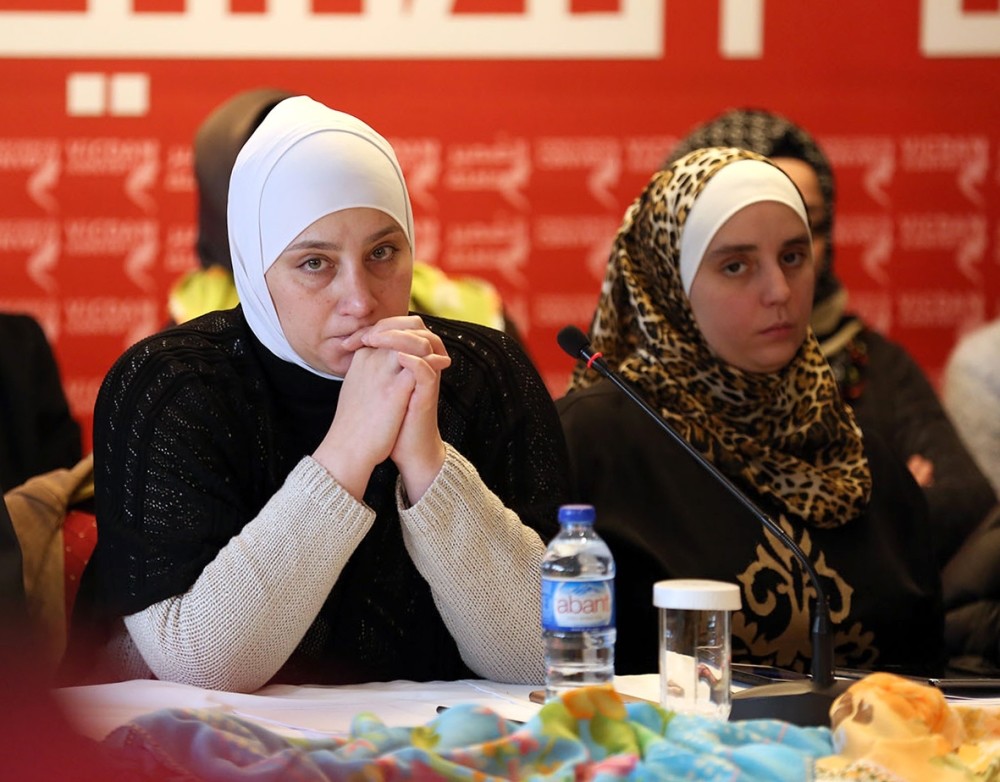 Majd Chourbaji (L), who was imprisoned by the Assad regime, spoke about her horrible experience in prison, at a press conference in Istanbul yesterday.
by Daily Sabah Mar 02, 2018 12:00 am

Women activists from Turkey's leading nonprofit groups and women from 55 countries will launch Conscience Convoy on Mar. 6 to raise awareness to the state of women held prisoner and tortured by Syria's Assad regime. The ultimate destination of the convoy, that will depart from Istanbul, is Turkey's border with Syria. Lawyer Gülden Sönmez, deputy chairman of the Human Rights and Justice Movement (İHAK), said at a press conference in Istanbul about the event that 13,581 women have been subjected to torture and maltreatment in the "dungeons of the Assad regime" and some were raped since an uprising against the regime started in 2011. "Currently there are 6,736 adult and 417 underage prisoners."

They are subject to torture and await death in prison. They are not hopeful for a release or liberation. We want to get them released," Sönmez said. "Tortured and raped, they commit suicide if they find an opportunity to do it. Some managed to escape and take shelter in Turkey," she added.

Majd Chourbaji was one of the women held captive in prison simply because of attending protests against the oppressive Assad regime. Speaking at the press conference, she said she spent seven months in prison after attending a protest in Daraa and her husband, jailed with her, died of torture. "They brought in my husband to the place where I was held and tortured him while I was watching. I was kept in a cell for a long time and then, they put me in a small room with 20 other prisoners. It was a room about 2 square meters. The other prisoners were elderly women, pregnant women and a woman who had just delivered a baby before her imprisonment. We were allowed to go to the bathroom only three times a day and only at eight hour intervals. I know people who were held there for years and tortured every day. I know babies born in the prison and babies who died there. My husband died there too and they did not even give his corpse to the family," she said. Chourbaji said men were tortured too and they were hearing their screams every day. "One of them was not allowed to go to the bathroom and when he defecated, they forced him to eat his feces," she said.

Dima Moussa, a Syrian lawyer, says women were either held in prison for joining peaceful protests or simply, to threaten their families and husbands. "They are beaten, harassed and raped," she claimed.

According to Gülden Sönmez, the Syrian regime "openly uses rape as a weapon" in the civil war. "Women victims of these evil acts are not heard by any country, any international body or international community at all. Nevertheless, they are subjected to crimes against international law, crimes against humanity. It has been seven years [since the war started] and we are still awaiting someone to do something about it," she said.

Activists are scheduled to hold another press conference in Hatay where the convoy is headed on March 8, International Women's Day. Women members of prominent nongovernmental organizations such as the Women and Democracy Association (KADEM) and the Ensar Foundation and Humanitarian Aid Foundation (İHH) are among those who will participate in the convoy.

Women make up the majority of millions of displaced Syrians who took shelter in safer regions of the area and countries neighboring Syria amid the ongoing war. They are also the most vulnerable among the victims of the conflict.

After the uprising began, the Assad regime started mass arrests. A report in the Independent daily says more than 65,000 people are thought to have died in prisons since 2011 and more faced mistreatment in detention. A group of women, who managed to survive their detention but were repeatedly raped by prison guards and other officials, filed lawsuits against their perpetrators abroad though the ongoing war will likely make it difficult to carry out an effective prosecution.