Day of grief as Turkey bids farewell to martyred soldiers 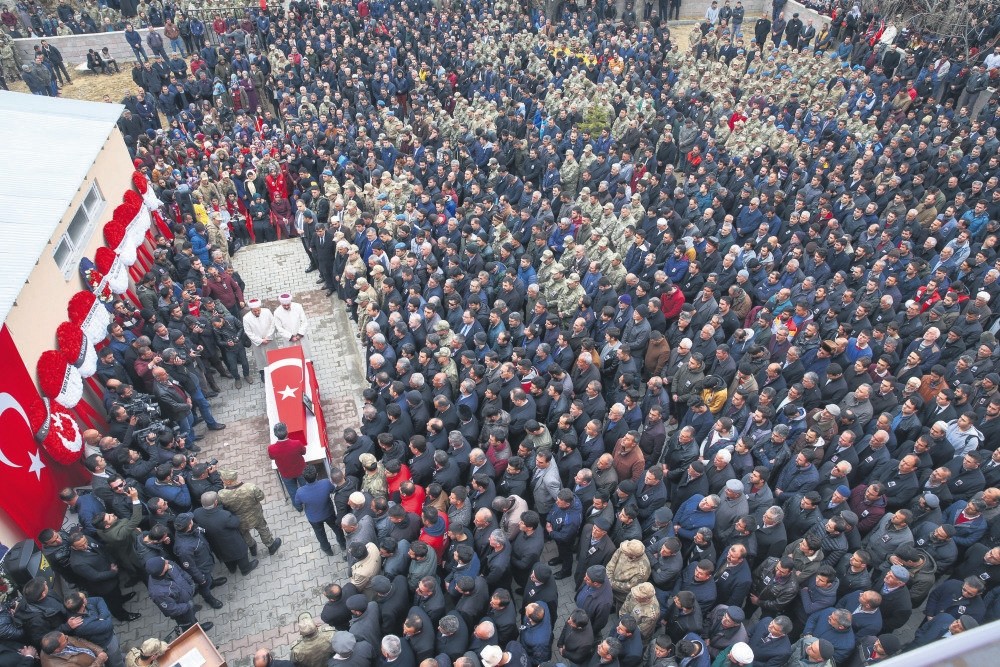 Tragedy and anger against terrorism gripped the funerals of eight soldiers who died in Turkey's Operation Olive Branch in Syria against a PKK-linked group, as thousands mourned and chanted slogans denouncing terrorists on Friday

"It is too foggy here. Give me your blessing. We are going to [central] Afrin," was Mehmet Dinek's last words to his mother when he called her two days ago. On Friday, his teary mother hugged a coffin draped in the Turkish flag as she cried, "You left us!" Dinek, a 22-year-old specialist sergeant, was among the eight soldiers killed in action Thursday in the Turkish Armed Forces' (TSK) Operation Olive Branch to liberate Syria's Afrin from terrorists linked to the notorious PKK. Soldiers engaged in clashes with People's Protection Units (YPG) forces linked to the terrorist group in a rural part of Afrin as the army accompanied the Free Syrian Army (FSA) opposition forces in marches toward the central town. It was the highest death toll occurring in a single clash so far. The operation marked its 41st day, moving slowly and carefully maneuvering to prevent civilian casualties in densely populated towns.

Funerals were held in the hometowns of the soldiers on Friday with the attendance of ministers and thousands of people who shouted slogans condemning the terrorists and vowing unwavering support for the army's operation.

In the western city of Isparta, some 10,000 people gathered for the funeral of 24-year-old Burhan Açıkkol. Açıkkol saw his family for the last time last week before his military unit left for Afrin. "I am going there to be a martyr," he told them, his relatives told reporters.

"Welcome, my brother," Fatma Demirel, sister of 24-year-old Spc. Sgt. Arif Demirel, cried as soldiers carried his coffin from a military cargo plane in his hometown Kastamonu in northern Turkey. The young soldier was married in December but postponed the wedding ceremony until the summer when his military unit prepared for deployment.

Funeral ceremonies for fallen soldiers often evoke patriotic sentiments in the country that has battled the PKK's violent campaign for decades. Thousands have been killed in PKK attacks and clashes with security forces since the 1980s. When the YPG expanded its clout in Syrian regions close to the Turkish border, Ankara launched the operation to stop it. More than 2,200 YPG militants have been killed in the operation since then, while 41 Turkish soldiers and 116 FSA were killed. Turkish forces and Syrian opposition took control of most villages around Afrin, but the central town still remains in the hands of the YPG, which has benefited from support from the United States under the pretext of fighting Daesh, another terrorist group active in war-torn Syria.