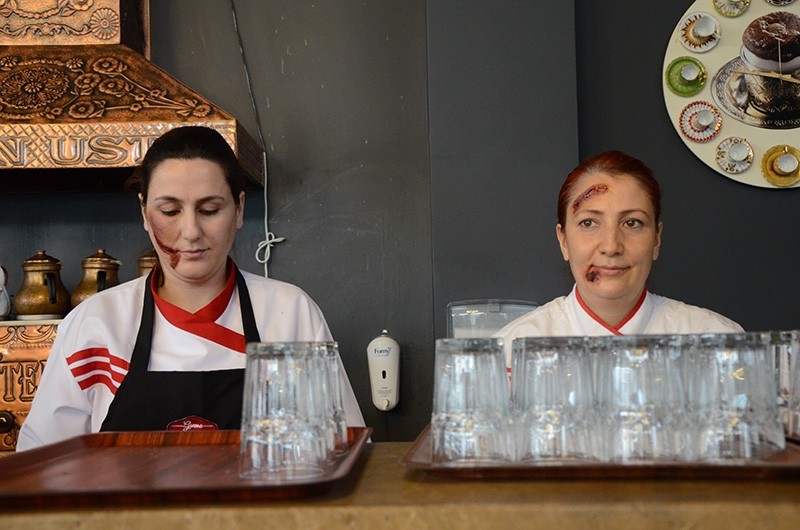 As people around the world gear up for International Women's Day, one restaurant in central Turkey is ensuring none of their customers let the day slip by unobserved.

At Ayten Usta Gurme Restaurant in Eskişehir province, cooks and waitresses have taken extra measures to raise awareness about the harmful, but often hidden, face of violence against women.

Using makeup, female employees have created cuts, bruises and scars on their faces to bring the issue into the public eye.

While some may think oozing wounds would ruin appetites, the restaurant's awareness efforts have brought an overwhelmingly-positive response from patrons.

"We wanted to get a response from our customers by painting our faces. Measuring the response of our customers, we are doing beautiful things. The reactions from the customers were good; they said they are supporting us."

Women account for 90 percent of the restaurant's employees, she pointed out.

"That is why we support women on behalf of our [restaurant], not one day but every day," Ünal said.

"Our business' employees are generally women and we are trying to give them employment. So we thank all the female employees who support us."

Another manager, Ayten Çetin, said: "Ayten Usta owes its success to our female colleagues with whom we work together. In light of this, we are very happy that women take part in working life."

Çetin also said the restaurant staff has been starting each day by reading news reports about violence against women, followed, of course, by the makeup process.

Despite efforts and public campaigns, violence against women continues to be a grave problem in Turkey, with the number of victims rising steadily. In 2017, the number of women killed by violence rose sharply by 25 percent to reach 409. In addition to deaths, thousands more are believed to have been injured by spouses, relatives and strangers.

Lack of implementation of anti-violence laws and lack of coordination between different government agencies are often cited among the primary deficiencies in the state's response to the issue, whereas economic conditions and terror are also noted as side causes.

However, experts note that reporting on these cases has significantly improved over recent years, which is an important step to identify the scale of violence and take action.

International Women's Day (IWD) has been celebrated around the world on March 8 every year for over a century, commemorating the movement for women's rights. The day was officially adopted by the United Nations in 1975.