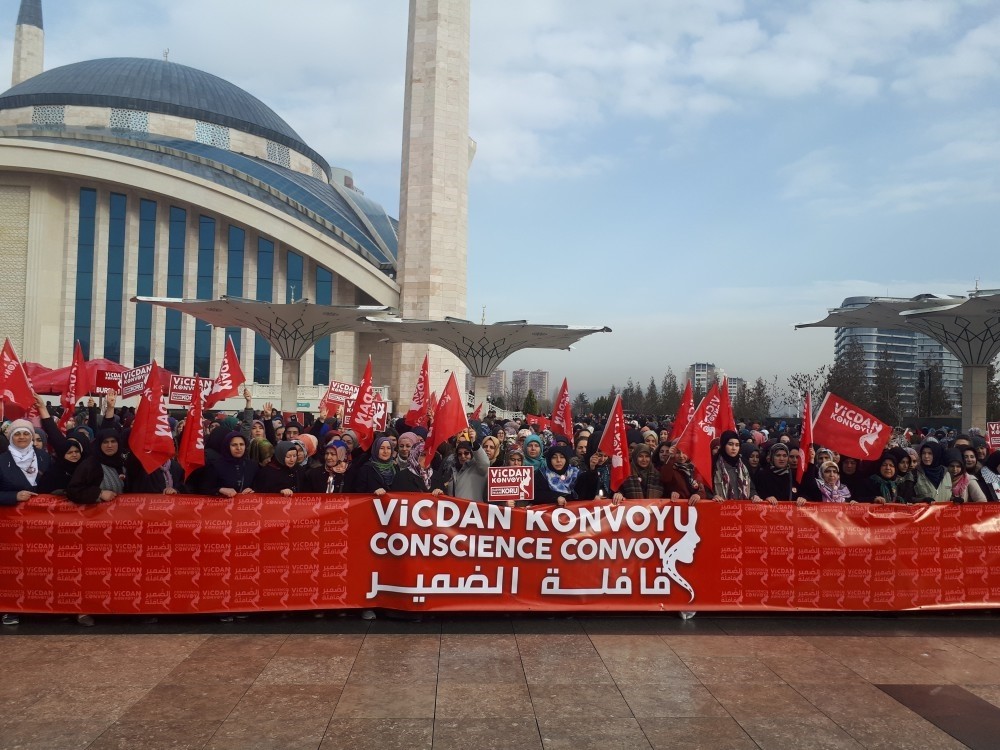 Women in convoy held a press briefing in front of Ankara's Ahmet Hamdi Akseki Mosque before they left for the border town of Hatay yesterday.
by Daily Sabah with AA Mar 08, 2018 12:00 am

The Conscience Convoy of 60 buses seeks to provide a voice for women kept in prisons by the Bashar Assad regime in war-torn Syria, and women raped and tortured in detention. The convoy set out from Istanbul on Tuesday, and will arrive at its last stop, Hatay, a Turkish city bordering Syria, today which is the International Women's Day. Once there, activists in the all-women convoy will tie scarfs on the fences separating Turkey and Syria, representing the women victims of the Assad regime's brutalities. Yesterday, the activists made a stopover in the capital Ankara where they were received by President Recep Tayyip Erdoğan.

Gülden Sönmez, a lawyer who acts as a spokeswoman for the activists, spoke to reporters in the capital and said all they wanted was "to hug our sisters," hoping for their liberation from the prisons. Along with senior representatives of prominent Turkish nonprofit organizations, women activists from across the country gradually joined the convoy along the way. Among those who joined the convoy from other countries are Yvonne Ridley, a British journalist known for her campaigns for women's rights, the Mothers of Srebrenica, an activist group that represents the survivors of the Bosnian war in the 1990s, Muslim Uighur women from China's Xinjiang region, Ukrainian lawmaker Olga Boholomets and British comedian Sajeela Kershi.

"We will meet thousands of women from other cities in Hatay. The Conscience Convoy became a voice for those in Syria's dungeons and their voice is now being heard all across the world. We wanted to draw attention to women prisoners. We wanted to say that they are still alive and await liberation," Gülden Sönmez said. "We call upon the heads of state, leaders, religious leaders, kings, queens, everyone to do something for release of our sisters," she said.

Speaking to Anadolu Agency (AA), Hawa Bibi Khan from South Africa said she had joined the convoy to stand in solidarity with the women and children in Syria and other war-torn parts of the world. "It is important to meet women, to hear what they have to share, to connect, and to see how we can collectively use our voices, our resources, and whatever else that we have to go back and make a difference," she said. Khan represents a human rights center in Cape Town and the Johannesburg-based Teddy Bear Clinic which works with children who have lived under oppression and are subjected to sexual violence.

Munaza Hassan, a Pakistani parliamentarian, called the convoy a "tremendous effort." "We are here for International Women's Day and we are going to mark this day with the Syrian women who were abused and tortured by the Syrian regime," she said. "I want to pay tribute to the Turkish government and people of Turkey who have shown hospitality towards Syrians," she added. She said after her return to Pakistan she would raise the issue in parliament and urge the government to contribute to it in some way.

Patricia Amina Ivanez from Chile said she left her five children at home "and just took the airplane, something brought me here." She said she would share her experiences with people in Chile and spread awareness about the issue.

The activists say that 13,581 women have been subjected to torture and maltreatment in Syrian prisons and some have been raped - since an uprising against the regime started in 2011. Current figures point out that there are 6,736 adult and 417 underage female prisoners, according to the activists.

Women make up most of the millions of displaced Syrians who took shelter in safer regions of the area and countries neighboring Syria amid the ongoing war. They are also the most vulnerable among the victims of the conflict.

After the uprising began, the Assad regime started mass arrests. A report in the Independent daily says more than 65,000 people are thought to have died in prisons since 2011 and more faced mistreatment in detention. A group of women, who managed to survive their detention but were repeatedly raped by prison guards and other officials, filed lawsuits against their perpetrators abroad though the ongoing war will likely make it difficult to carry out an effective prosecution.

Um Mohammad, who lives in the Eastern Ghouta region of Damascus, said while she was going to work one morning in 2012, having covered even her face with her headscarf, regime forces forced her into a car, took her to a detention center, and beat her. After being interrogated three times and being placed in a room with seven other female detainees, Mohammed said her headscarf was forcefully taken off. "You could read on everyone's face in the room that they were being exposed to torture. There was a girl in the ninth grade. She was raped by six people in front of everyone. The girl was from a very religious family. Then they took her elsewhere but she never came back. If she were alive, she would have come back," Mohammad told AA. Um Mohammad said she resisted when they violently pulled off her headscarf. "For this very reason, I was tortured. I was raped in front of everybody." Five or six days after she was arrested, Mohammad said she was placed in solitary confinement, spent about two-and-a-half months with little bread and some cheese given to her every 10 days. She got severely sick and her nervous system collapsed because of what she endured. Emphasizing that all women held in the Assad regime's prisons were subjected to rape and harassment, Mohammad said, "You go in with your dignity, but you cannot leave with your dignity intact. Women were raped and tortured multiple times. I was being kept in a cell but I could hear people screaming and shouting because of torture and persecution. Their voices continue to ring in my ears, my head. It is impossible to forget." Mohammad said after she got out of prison, her unjust treatment continued. Her family rejected her, and she married a cousin but he divorced her after he found out that she had been raped.

Maryam from Homs, 24, a mother of four, is another victim. At the beginning of the civil war, Maryam said she participated in demonstrations led by her two cousins in Hama. After the regime resorted to violence, the demonstrating group opened a field hospital and Maryam volunteered to work there. Maryam said when the regime forces entered Hama, they were denounced by an Assad informer working in the hospital. "My husband was an official in the Directorate of Agriculture and Stockbreeding. They caught him and asked about me during the interrogation. When my husband told them I was his wife, they tried to extort information from him. Meanwhile, my friends told me to run away, but I had missed my children very much. I came to my parents' house at 6:00 in the morning when the regime was trying to suppress the demonstrations in Hama," she said.

The regime forces suddenly barged through their door and raided the house just as Maryam was hugging her children, trying to fulfill their longing. She said they grabbed her four-year-old daughter and asked her "Where is your mother?" while violently shaking her. The Shabiha militias started dragging me on the ground in front of the entire neighborhood after exposing my hair and upper body. I was forced into an armored vehicle and saw that there were four other young girls there with me," Maryam said.

Maryam said there was only a single bed in the interrogation room. "There was no end to their tortures. You can't imagine what would happen after midnight." One of the girls they raped became pregnant. She continued to be raped while she was pregnant. She went into labor in the sixth month. They shot her child in front of her. That girl went insane. Now her parents have to tie her with ropes to contain her. One of my friends was in her third year in medical school. She was single. She was raped, too. There was a young man named Ahmad from the Safira region. He would cry bitterly when he heard our cries. Torture every morning, rape in the evening. Nobody cared, nobody heard. What was our crime? We helped the injured. We sent food to families under siege."