Conscience Convoy concludes with a cry for Syrian women 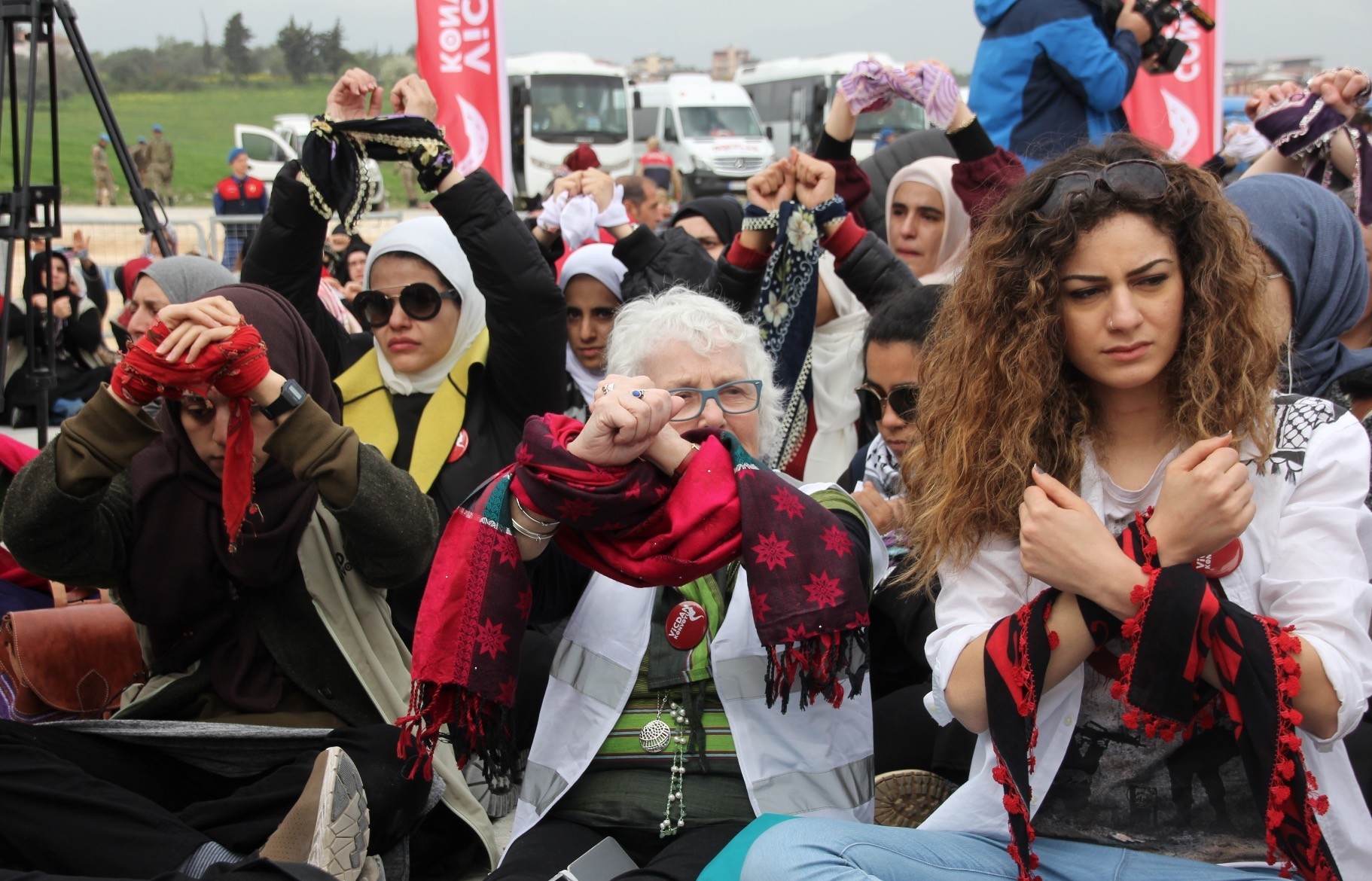 Activists shackled in scarves symbolizing handcuffs to raise awareness of female prisoners.
by Daily Sabah with AA Mar 09, 2018 12:00 am

Wrapping ornate scarfs representing women oppressed by the Syrian regime around their wrists, activists from around the world denounced the plight of Syria's female prisoners at the final event of the Conscience Convoy. The convoy, which brought together female activists from 55 countries, ended its journey in Hatay, a Turkish town bordering Syria, on International Women's Day. The convoy departed Istanbul on March 5 and more women joined the busloads of activists along the route.

"We hit the road to protest the oppression of our Syrian sisters. This is a movement that will prevail until there is not a single female prisoner [held by the Assad regime] in Syrian prisons," said Gülden Sönmez, a Turkish activist who served as the convoy's spokeswoman.

The activists say that 13,581 women have been subjected to torture and maltreatment in Syrian prisons, and many have been raped, since an uprising against the regime started in 2011. Current figures show that there are 6,736 adult and 417 underage female prisoners, according to the activists.

The convoy of 200 buses converged at an outdoors event venue for a press statement after their arrival in Hatay. Chanting slogans and waving flags, the activists called on "killer Assad" to "empty the prisons."

"Women from different countries, different cultures acted in solidarity for this convoy. Our voices are heard across the world. People ask us what our motivation is. It has been seven years since the war began and enough is enough. We are angry with the cruelty toward women and children in Syria. We witnessed the suffering and deaths of many. This war knows no morals, no laws. They use rape as a weapon against women. This is a shame for humanity," Sönmez said in a press statement. "The world has to make a choice. Those allied with the Assad regime have to choose the side of either those imprisoning, torturing and raping women or they should be the ones to end this cruelty. We, as women, expect you to make a choice," she said.

Majd Chourbaji, a Syrian woman who was imprisoned for seven months in Syria, was among those who joined the convoy. Speaking in Hatay, Chourbaji related the torture she was exposed to. "They kept 20 prisoners in a small room that was barely fit a few. We couldn't sleep for days, we were tortured for hours," she said, adding that her husband, who was also imprisoned, died six months after he was released duo to the torture he was subjected to.

Nur Alhuda Hijazi, another participant of the convoy, spoke to Anadolu Agency (AA) about the torture and sexual harassment she had to endure during her one-month long incarceration at a prison in Damascus. Hijazi said the convoy's message of being a "voice of the oppressed women in Syria" was vital for "the Syrian sisters still remaining in this hell."

She said her own ordeal began on Sept. 25, 2012 when she was arrested and imprisoned in a notorious prison in Damascus. "The soldiers abducted me and pushed me inside their car on the street in front of hundreds of people," she said. Her torture began in the car itself. The soldiers repeatedly sexually harassed her and insulted her while she was being driven to the prison, she said.

Hijazi - an economics graduate who used to do relief and media-related work in 2010 before the war began in her country in 2011 - said she later learned that the reason for her kidnapping and subsequent torture in prison was because the military wanted information on some people she knew.

"Arriving at the prison they stripped me completely before I entered the prison, 'to inspect me,' they said. "My first night was a very difficult night, I did not know what would happen tomorrow." She was also horrified to see other female victims in her jail cell. There were seven Syrian women in the 6-square-meter cell, including a 65-year-old woman and a 14-year-old girl who had been raped in prison and showed signs of pregnancy. "In the morning, when the guard told me to come with him on my first day, the blood froze in my veins, he blindfolded and handcuffed me and took me to the interrogation room." In the room, a barrage of questions laced with threats followed, asking her to give up information that she knew would deeply affect a large number of her friends and family. But she refused to snitch.

"My answers made the officer angry, he would beat every part of my body while the other soldiers were sitting in the room laughing," she said. When she still refused to budge, her torturers began to electrocute her. Hijazi said every time the officer did not get an answer from her, he would beat her while she was blindfolded and then use electric shocks. Following the interrogation, she would be left outside the prison corridor with her hands tied for several hours, while everyone passing by would slap or hurl insults.

"In the many days of interrogation, I was threatened with rape; one time the interrogator said to one of the officers: Take her to a room with five officers, so that they rape her. They made me walk through a long corridor. I closed my eyes hoping they would go away. I opened my eyes to find myself in front of my own cell without any soldiers, they would try to beat me psychologically," she said.

Hijazi said her torture continued for seven long days, from morning until evening. Eventually, she gave up some names as she could no longer bear the pain. "After seven days of torture, I grew tired and gave them some names as I knew this torture would continue if I would not give them anything," she said. After 13 days, Hijazi was taken to a cockroach-infested solitary cell, about 2 square meters long with a very small hole for air. She was made to hear the wails and screams of other victims being tortured mercilessly. "The soldiers were placing the young detainees in front of the cell and beat them and tortured them until they were unconscious, then they would pour water on them and electrocute them to [make the other prisoners] hear their voices," she said. While she considers herself to be lucky to be out, she constantly recalls the "thousands" of women who continue to suffer in such prisons each day.

"I'm out of prison but so far there are women who are subjected to daily torture in prison, thousands of them and no one hears their voice," she said. She hopes the Conscience Convoy in Turkey will help give a voice to these "voiceless women."