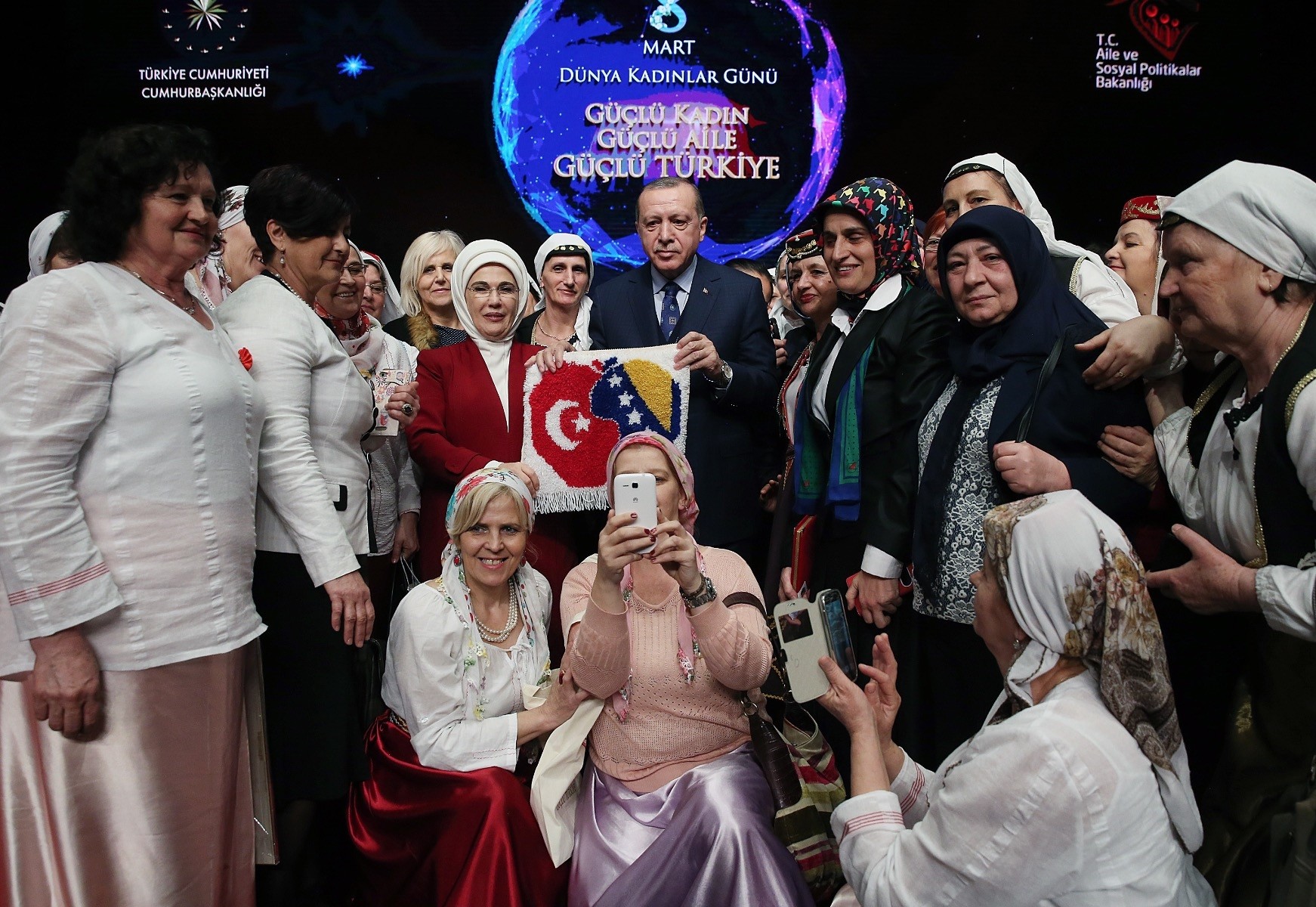 First Lady and President Erdou011fan poses with women on the sidelines of the event held at the Presidential Complex.
by Daily Sabah Mar 09, 2018 12:00 am

A large group of women from all backgrounds were welcomed yesterday by President Recep Tayyip Erdoğan at the Presidential Palace, Ankara, as part of the International Women's Day program in which the president thanked women for their central role in society. Erdoğan also underlined that Islam's rules for daily life and human relationships are updated over time, criticizing recent msogynistic remarks by some bigoted clerics.

On International Women's Day, President Recep Tayyip Erdoğan hosted women from all walks of life at the Presidential Complex. As he heaped praise on women's role in society, the president also slammed "some clerics" justifying violence against women and defending other forms of misogyny with reference to Islam.

"Recently, some people claiming to be clerics issued statements contradicting the religion. It is hard to understand. They have no place in our times. They don't know Islam needed an update and is accordingly updated. You can't apply the practices applied 15 centuries ago today. Islam changes and adopts to the conditions of different ages. This is the beauty of Islam," Erdoğan said.

He did not give names but was clearly referring to Nurettin Yıldız, a writer with a theology background who is viewed as a spiritual leader by his followers. Yıldız, who faces a criminal inquiry for "inciting hatred," made the headlines this week when his remarks justifying domestic violence emerged. "Allah told us to hit women [to tame them]. Women should be grateful that their husbands [only] beat them," Yıldız said in his controversial remarks that paved the way for prosecution.

"I know some hodjas [clerics] will criticize me now. May Allah be pleased with what we say," Erdoğan added.

The president added that bringing traditional behavior confined to its era, "to generalize exceptions" would spoil the struggle to resolve women's problems. "It is unfair to Islam, to our faith to discuss the matter by reference to religion," he said. Erdoğan dismissed different interpretations of the religion. "Our reference is the Quran and if something is not against the Quran, the conversation is over," he said.

A public debate raged recently over the controversial remarks by Yıldız and other spiritual leaders trying to justify violence and the rape of women in a religious context. Critics have called for Yıldız to be prosecuted while Erdoğan offered a veiled criticism of Yıldız in a speech Wednesday.

Domestic violence, particularly the murder of women by their spouses, has received wider media coverage in the past decade as awareness has been raised on the issue. Activists call for tougher sentences for perpetrators and better protection of women. Authorities say a change in mindset is needed to curb the violence.

"We have very experienced clerics in our Presidency of Religious Affairs. They are skilled in tafseer [interpretation of the Quran] and fiqh [Islamic law]. They should not stand idle. If they don't do anything, others will fill the gap," he said, referring to the controversial "clerics." "This is how FETÖ [Gülenist Terror Group] emerged," Erdoğan added. FETÖ started out as a religious movement focusing on charity work decades ago. Led by U.S.-based Fetullah Gülen, who is known for his lax interpretation of religion, the group evolved into an influential force through its infiltrators in law enforcement, the judiciary, army and military. It tried to seize power by a coup bid in 2016.