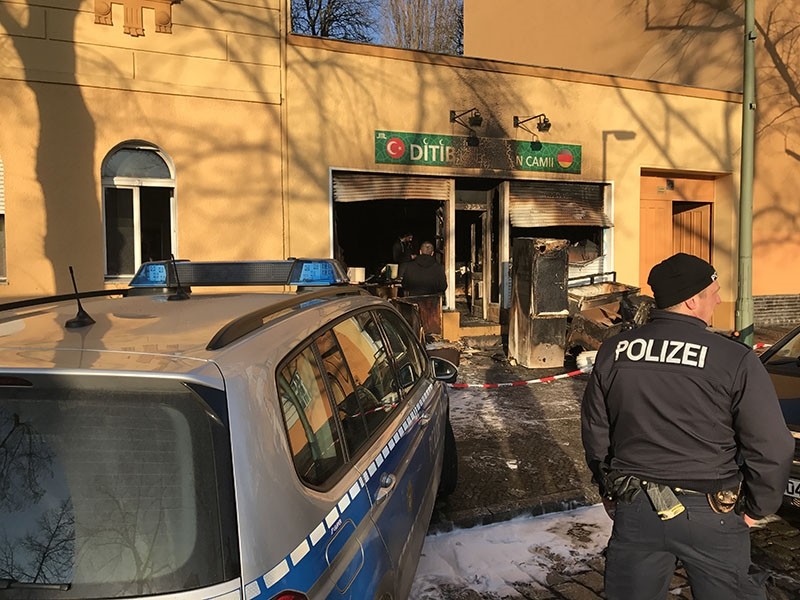 A Turkish mosque in German capital Berlin was set on fire early Sunday in the latest incident of a series of attacks targeting the country's Turkish and Muslim community by PKK sympathizers and far-right groups.

The attack on Koca Sinan Mosque of the Turkish-Islamic Union for Religious Affairs (DİTİB) in Reinickendorf district near Berlin took place around 02:00 a.m. local time.

Bayram Türk, the religious official of the mosque, told Anadolu Agency that the mosque's entrance and the tea shop was on fire when he arrived to the scene, and firefighters were intervening.

Türk said that two people stated that they saw three assailants wearing masks throwing inflammable material to the mosque and running away from the scene.

Berlin police stated that they suspect an attack on the mosque since the glass on the door of the mosque's tea shop was broken first, adding that an investigation is underway.

Türk said that the fire rendered the mosque unusable.

The suspected attack was the final incident in hundreds of attacks that targeted the country's Turkish and Muslim communities amid a rising far-right trend after a massive refugee influx. There were 950 attacks in Germany last year on Muslims or places linked to Islam, according to the interior ministry.

Attacks by PKK sympathizers gained pace after the launch of Turkey's Operation Olive Branch to root out PKK-affiliated People's Protection Forces (YPG) terrorists in Afrin on Jan. 20. Numerous mosques and Turkish community centers in several German cities and even the Turkish embassy in Berlin have been attacked by YPG/PKK supporters.

On Saturday, a webpage affiliated with the PKK and its Syrian offshoot the Democratic Union Party (PYD) has posted a video footage of an attack early Friday on a mosque in southwestern Germany.

The Akşemsettin Mosque -- belonging to the Muslim-Turkish association Islamic Community National View (IGMG) -- in the town of Lauffen am Neckar near Stuttgart was attacked at 02.00 a.m. (0100GMT) Friday.

The arson at the mosque caused material damage before the imam managed to extinguish the blaze. There were no casualties.

Video footage of the attack was posted on the PKK-affiliated webpage Roja Civan, showing four people attacking the windows and doors of the mosque with Molotov cocktails while another attacker is breaking the windows with rocks.

The attackers later flee the scene.

Other PKK-propaganda posts were also found on the webpage, which says, "As long as the attack on Afrin continues, the resistance will grow daily," referring to the current Turkish-led counter-terrorism campaign in northwestern Syria.

German police said Saturday they had opened a probe into attempted murder after a fire at a mosque near Stuttgart where Molotov cocktails were thrown.

A joint statement said "several Molotov cocktails were thrown into the mosque through an open window," adding that they were treating the incident as a possible racist or anti-Islamic attack.

Germany is home to some three million ethnic Turks. On Saturday the leader of the community, Gökay Sofuoğlu, denounced the incident as an "inhumane crime" and an "act of terrorism".

Turkey has long criticized Germany for not taking serious measures against the PKK, which uses the country as a platform for their fund-raising, recruitment, and propaganda activities.

Germany has a three million-strong Turkish community, many of whom are second- and third-generation German-born citizens of Turkish descent whose grandparents moved to the country during the 1960s.