Turkish court to decide Uber's fate amid violence against its drivers 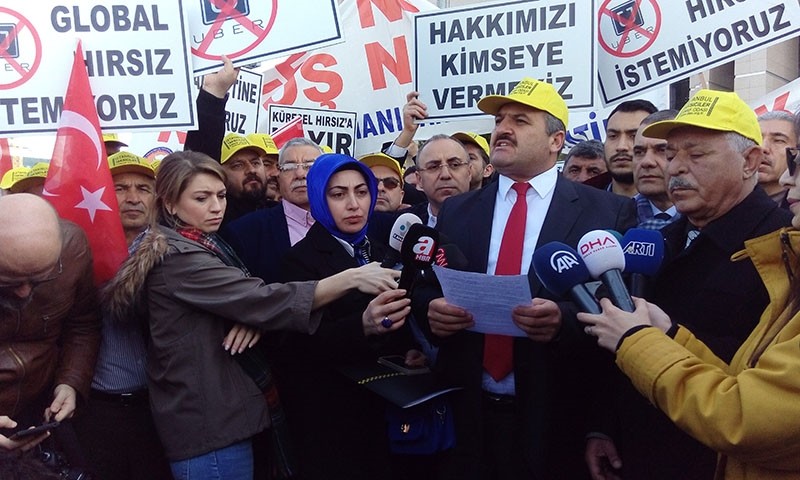 International ride-hailing platform Uber, which has met protests from taxi drivers around the world, faces legal action today in the first hearing of a trial calling for its ban. The hearing, which will begin in Istanbul is the result of complaints by taxi associations claiming it hurts competition. It comes after a week when two incidents escalated hostility against the company.

In one incident, captured in camera and circulated online, a group of men -- taxi drivers according to the caption -- are seen surrounding a Uber vehicle they hitched, denouncing the "pirate" taxi before hitting the driver.

Another incident was on Saturday night. Yunus Emre, an Uber driver, escaped uninjured from an armed attack in Istanbul's Küçükçekmece district. Emre told police he was in the district for a fare when someone tried to stop him. When he sped up, the unknown suspect opened fire, smashing the back window of his car. An investigation is underway to capture the suspect.

Uber drivers on social media are complaining of increasing threats from taxi drivers, claiming they were threatened by drivers who posed as customers. A driver has shared a video showing a commercial taxi blocking his way while he was carrying customers. The driver in the video then try to slash the Uber car's tires before the driver sped up and fled the scene. Taxi drivers, on the other hand, claim drivers for the ride-hailing platform and proponents of Uber are trying to pin the violence on taxi drivers ahead of the trial.

Licensed taxi drivers say the company takes advantage of the lack of inspections and legal loopholes to freely operate in the country where its services are currently confined to Istanbul . Police have considerably decreased the number of unlicensed taxis in operation with frequent crackdowns that end up with fines issued to the drivers. Still, Uber enjoys virtual immunity due to a lack of laws banning its online services in their entirety. Authorities recently stepped up operations against Uber's drivers and its passengers by issuing fines to both. The company itself dodges fines as it only acts as an intermediary between drivers and passengers.

Uber made its foray into the Turkish market in 2014. In a statement published by Hürriyet daily, the company said it would offer "necessary legal aid" to drivers subject to attacks. The company also underlined that it complied with regulations in Turkey for its operations.