Good deeds across the world recognized in Benevolence Awards 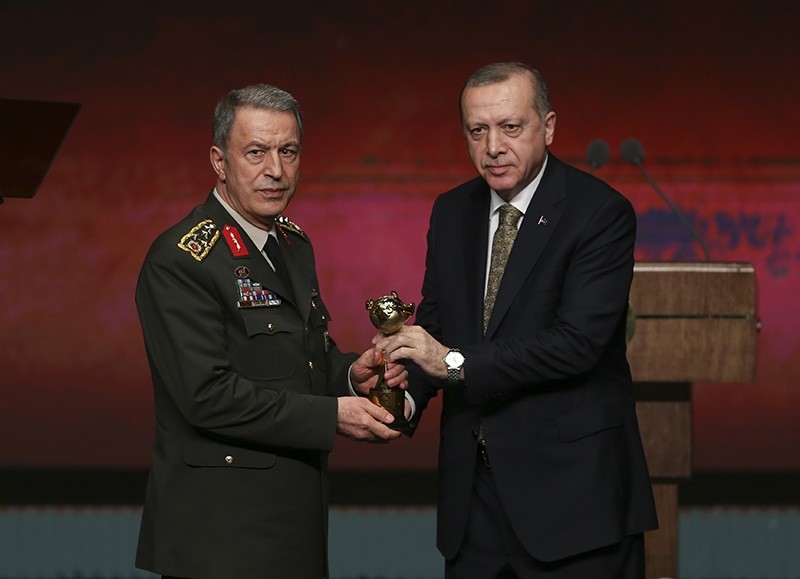 In its fourth edition of International Benevolence Awards, Turkey's Presidency of Religious Affairs (DİB) hosted "good people" from across the globe recognized for their acts of kindness. Seven recipients from Turkey, Canada and the United States, received their prizes at a ceremony held at the presidential complex and attended by President Recep Tayyip Erdoğan on Tuesday.

Muhammad Bzeek, a U.S. national of Libyan origin who made foster parenting of terminally ill children a habit, Hasan Kızıl, a young man from southeastern Turkey who built prosthetic limbs for amputated animals are among award recipients. DİB describes the awards as means to spread goodness and raise awareness to problems addressed by the good deeds of recipients.

Speaking at the awards ceremony, Ali Erbaş, head of DİB, said they organized the awards to raise awareness to benevolence "at a time when the world is surrounded by evil, wars, poverty and terrorism." Erbaş said that apart from seven recipients, they awarded Turkish army a honorary prize "in memory of martyrs died to protect the nation and oppressed people of the world."

Hasan Kızıl, a 22-year-old man from Derik, a southeastern Turkish town, is one of the "benevolent people" awarded by the presidency. Kızıl dedicated his life to building prosthetic legs, hands and arms for animals for free. An amateur inventor, he started out by building prosthetic body parts from junk he collected from junk collectors. The young man delivered prosthetic parts, such as two hind legs he made out of shopping cart wheels for a cat, for 200 animals all across Turkey, for free. "It all started after a cat got stuck in the engine of my car. Its legs were crushed and there wasn't a veterinary clinic available. I decided to tear apart wheels of a toy I found at home. I made a wheeled limb for the cat. Later, I improved it after learning new tips on how to make prosthetic limbs online. Once the cat recovered, I decided to do build more and not just for cats but all animals in need," he has said in an interview last year. Kızıl now contacts animal rights activists and offer free help to produce prosthetic limbs.

Sevde Sevan Usak from Istanbul, who settled in the Maasaia region in Tanzania after her marriage to a local there, was recognized for her contribution to the education of women and children in Tanzania. She helped local women engage in agriculture by helping them plant fruit trees and mobilized Turkish charities to drill water wells for the poor Maasai community.

Yahya Hashemi, who runs a restaurant in Canada's Montreal, is recognized for giving free food to the needy with a sign in English and French: "People with no money are welcome to eat for free." Hashemi soon drew patrons who donated money for him to offer more free meals to the needy.

Kanber Bozan, a 49-year-old grocer living in Istanbul's Üsküdar district, is hailed for turning a section of his store into a library for children. Bozan offers gifts to children from his store based on the number of books they read and if they give a summary of the book they read to Bozan. After his story made the headlines, his store was flooded with books donated from all across the country. "I am happy to be awarded. This will help us improve our project, to give more books to children," he said in an interview after his name was announced a week ago for awards. "I see children do not read books as in the past. They are too engaged in their smartphones. I want to encourage them to read more books. Besides, this makes their families happy," he adds.

Mahmut Karaman, an academic from the city of Sakarya, is another recipient for driving across Istanbul at night to serve soup to the homeless and migrants.

Muhammad Bzeek, a 62-year-old U.S. citizen of Libyan origin, is recognized for only taking in terminally ill children as a foster father.

Bzeek, who lives in California, has dedicated his life to terminally ill children since 1995. He took in eighty children and hailed for his work in a foster care system which does not offer extra care for terminally ill children mostly confined to hospitals. Bzeek says he does this "to earn the blessing of Allah," as Ensar Altay, a Turkish filmmaker who shot a documentary on him says. "The key is, you have to love them like your own. I know they are sick, I know they are going to die. I do my best as a human being and leave the rest to God," he said in a recent interview. "I have been asked 'why do you do this? and answer is simple. Even if these children cannot communicate or see or hear, they have a soul. They need somebody to love them. I tell them 'it will be OK, I am here for you. We will go through this together," he told People magazine in an interview.

Levent Uçkan, an imam in Istanbul's Kadıköy district, is recognized for helping homeless children and offering free meals for students at the mosque where he works.