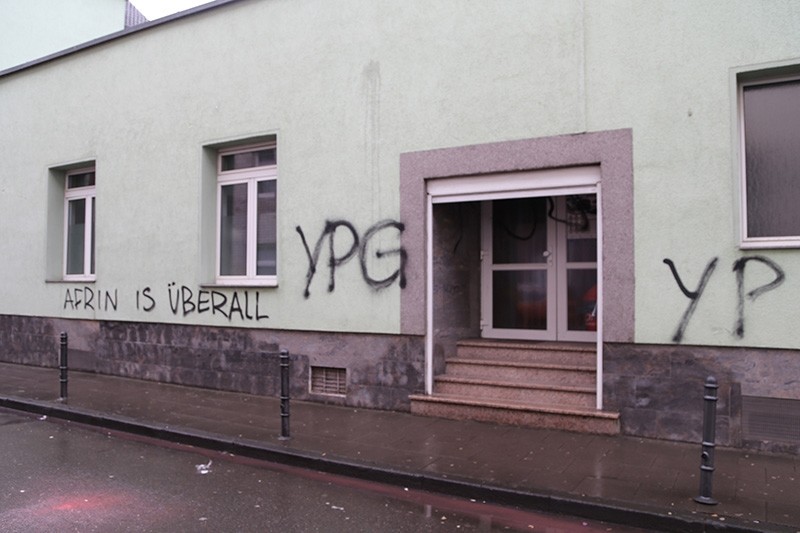 A mosque in Germany's northwestern city of Cologne was vandalized overnight by supporters of the PKK terrorist group and its Syrian offshoot People's Protection Units (YPG), the latest in a string of attacks targeting the country's Turkish-Muslim community.

The assailants spray-painted slogans such as "Everywhere is Afrin" on the walls of the Eyüp Sultan Mosque, run by Turkish-German Muslim association DITIB.

The YPG/PKK's youth wing threatened recently to carry out violent attacks against Turkish community in Germany, to protest Turkey's ongoing counterterrorism operation in the northwestern Syrian city of Afrin.

DITIB Chairman Nevzat Yaşar Aşıkoğlu has called on German authorities to do everything to arrest the assailants and increase security measures to protect places of worship.

"There have been 25 attacks targeting mosques since Jan. 1," Aşıkoğlu told reporters, during his visit to Eyüp Sultan Mosque in Cologne.

"We are worried and concerned. We are expecting from authorities to take security measures and we are hoping for an end to these attacks," he added.

On Monday night, PYD/PKK supporters in Berlin attacked a Turkish restaurant with stones and smashed its windows.

Over the weekend, several mosques, associations and shops were attacked by firebombs, in various cities across Germany.

Turkey delivered a diplomatic note to Germany on Monday and asked for immediate measures to protect Turkish community from YPG/PKK violence.

Turkey has long asked for more serious measures against the PKK, which uses the country as a platform for their fund-raising, recruitment, and propaganda activities.

Ankara launched Operation Olive Branch on Jan. 20 to clear terrorist groups from Afrin in northwestern Syria amid growing threats posed by the region to Turkey.

The Turkish General Staff has stressed that the operation aims to establish security and stability along Turkey's borders and the region as well as protect Syrians from the oppression and cruelty of terrorists.

The military also underlined that only terror targets are being destroyed and "utmost care" is being taken to not harm civilians.