March 18 to be commemorated with theme of unity 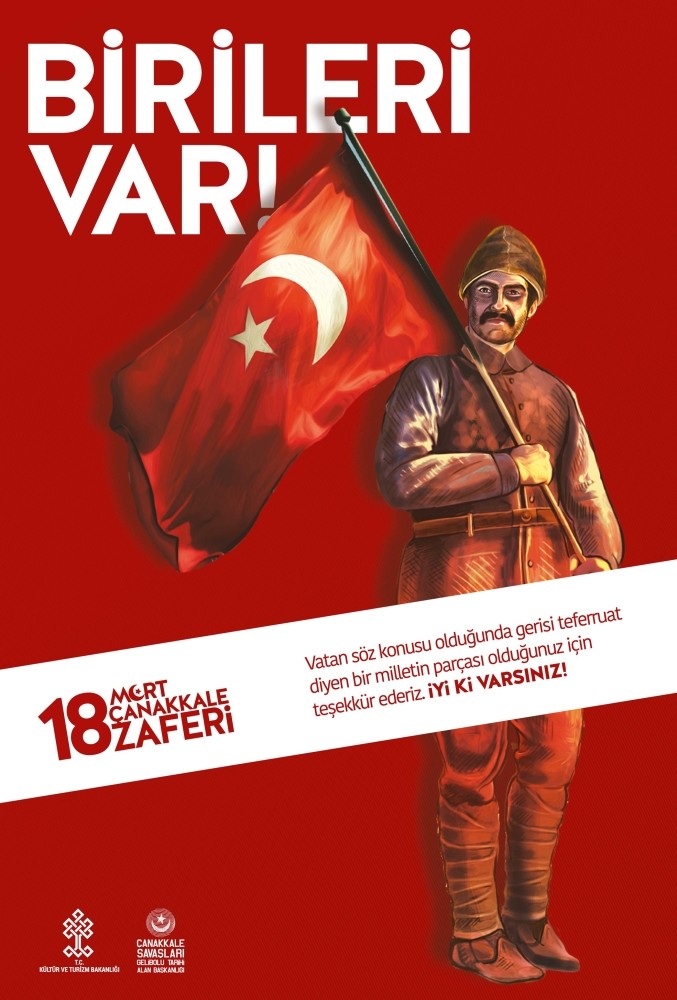 The Culture and Tourism Ministry and the Gallipoli Campaign Historical Department prepared a public service ad and composition for the celebration of the 103rd anniversary of the victory of the Battle of Gallipoli on March 18. The film and the composition prepared with the slogan "Birileri Var" (which refers to the idea that there is always someone willing to defend the nation) will be used throughout the country during the 103rd anniversary.

The Culture and Tourism Ministry and the Gallipoli Campaign Historical Department will battle victory, which will be commemorated for the 103rd time on March 18, with different themes throughout the country. From now on, the celebrations will be held with a different theme prepared by the Culture and Tourism Ministry in Çanakkale and elsewhere in the country. The Gallipoli victory celebrations will mark a different point every year and will be organized to create awareness.

The public service ads and visual materials are designed to increase Turkish people's awareness to transmit the spirit of the victory to all of society.

Culture and Tourism Minister Numan Kurtulmuş, who is overseeing the project, said: "We aim to take a strong step in reaching the level that the March 18 spirit deserves with the campaign carried out under the control of the Culture and Tourism Ministry and Gallipoli Campaign Historical Department. The spirit of March 18 is commemorated on the anniversary of the Battle of Gallipoli at a time when we struggle against separatist terrorism in a far off region of the country and when we are lending a hand against persecution and when we shield our body against malicious attacks like was done and continues to be done by some in Afrin. With this theme, we want to express that we didn't and won't forget these someones among us. We know that our people always embrace these soldiers, but we want to remind people of it one more time."

They are one of us

The film, which was prepared for the anniversary, tells that the people who are mentioned as "someones" who are ready to sacrifice themselves like what happened in the Gallipoli campaign or the 2016 coup attempt, are our neighbors and our brothers, that is, our people.

The campaign, which has the slogan "Birileri Var" aims to create awareness to encourage social cohesion promising hope for future.

The Battle of Gallipoli was a unique victory that became a turning point in Turkish history.

For this victory, hundreds of thousands of people with different identities gathered from different corners of the Ottoman Empire and became a whole body in defense of the realm against enemy soldiers. The March 18 spirit played out repeatedly afterward during the July 15, 2016 coup attempt , in the years of the National Struggle, in the Cyprus Peace Operation and on the fight against the PKK in the southeast.

History has recorded countless examples that people here will sacrifice themselves resolutely with a new spirit if the subject is their country.