Arrested cow to be resettled to farm 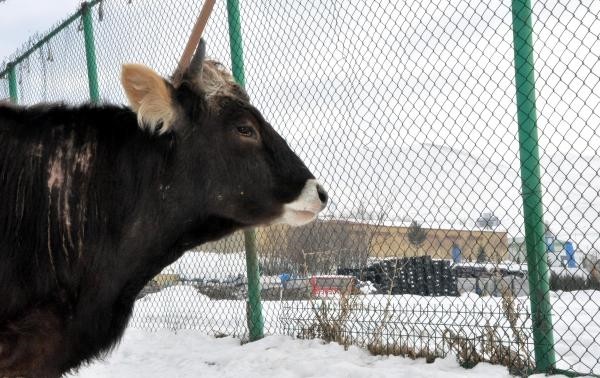 "It is not arrested," Orhan Deligöz insists, but a 2-year-old cow which caused a crash in Erzurum spent almost two years alone in a shelter after the accident. The unnamed cow that made the headlines from an image showing it longingly gaze beyond the iron fences of a shelter, will now be resettled to a farm, after Deligöz, a lawmaker for this eastern city, took an interest in the case. Deligöz contacted local officials and arranged moving the cow to a farm run by a local veterinary school, where cows like it live.

Authorities have failed to locate the owner of the cow that suddenly jumped in front of a car in August 2016 in Erzurum's Palandöken district. The driver was injured in the crash and the prosecutors have ordered it to be taken into some sort of custody until its owner is found. The owner, apparently fearing he or she would be charged for indirectly causing the crash by letting the animal loose, did not come forward.

"When I heard about this animal, I contacted the prosecutor and the operator of the shelter. It is very well cared for here. Authorities naturally impounded the animal and it is not a literal arrest," Deligöz told reporters. The lawmaker said the cow had everything it needed from food to water and a comfortable place to stay but it needed company "like humans do." "We found a place in a livestock farm of Atatürk University (veterinary school). Doctors will now examine it for any disease and if it is found fit to live with others, it will be transferred to the farm," he added.