On brink of pandemic, Turkey mulls tougher fight against drugs 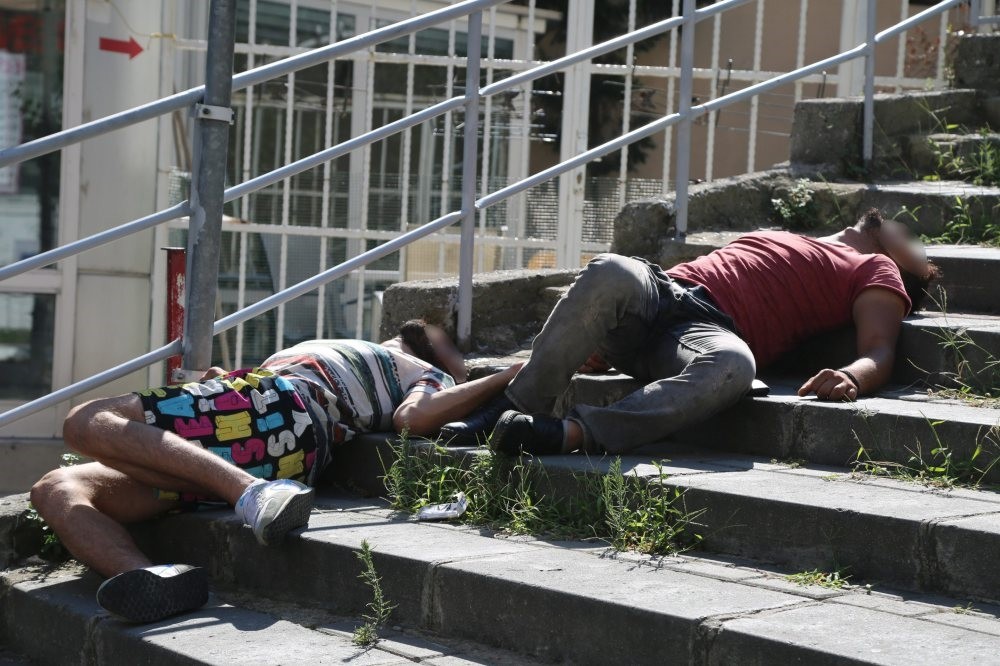 Two young men lie unconscious on the stairs in Istanbul's u015eiu015fli district after using bonzai. Bonzai is a cheap and popular drug, especially among the youth.
by Compiled from Wire Services Mar 21, 2018 12:00 am

Deputy Prime Minister Recep Akdağ said Turkey is on the brink of a drug pandemic like these currently prevalent in the West, adding that Ankara will step up the fight with new measures

Turkey is planning to step up its fight against narcotics across the country, which has been a popular route for drug trafficking to and from Europe, as drug usage saw a sharp rise among its youth.

Deputy Prime Minister Recep Akdağ said Europe, the U.S. and other western countries are "facing a pandemic," while Turkey was also "on the brink" of a drug epidemic.

"Our success in the fight against drugs over the next two years will define our future in terms of counternarcotics efforts," he said.

On Tuesday, Akdağ chaired a meeting in Istanbul of provincial officials and local health authorities from around Turkey that discussed and exchanged information on counternarcotics efforts.

Ankara is expected to unveil a strategic paper on the action plan against drug use and smuggling. Akdağ said President Recep Tayyip Erdoğan will personally announce the paper's contents.

Looking to curb domestic drug use, the government in 2014 launched "The Rapid Action Plan Against Drugs" that covered everything from prison sentences for drug dealers to improved rehabilitation for addicts and security measures - such as deploying police squads near educational institutions to detect drug sales to students.

Though the absence of any concrete or updated figures on the prevalence of drug usage in Turkey, unofficial figures suggest a rate of around 2.7 percent.

The deputy prime minister said they compiled a comprehensive strategy and action plan to combat drug use and it should not be "on the paper" only. "Fighting against drugs is not easy. Developed countries are in the throes of this pandemic and some have even resorted to legalizing certain types of drugs," he said adding that they needed assistance from everyone, particularly non-profit groups, to raise awareness on drugs.

"We will have a less impact if universities, companies, scientists, labor unions, opposition parties, everyone do not support us. We have to win this fight," he said.

One particular concern for authorities is Bonzai, a synthetic drug that is easily accessible due to its cheap price. Images of people, as young as 15, in an almost catatonic state after taking Bonzai in public places have raised a public outcry in recent years.

Akdağ, a former health minister, says the fight against addiction needs a bigger approach covering other kinds of addiction as well, noting that smoking and alcohol addictions sometimes pave the way for drug addiction. The government will also introduce new action plans against other addictions, Akdağ says.

The meeting was attended by representatives from Adana, İzmir, Ankara, Bursa and Gaziantep, whose total population almost make up for the half of population of Turkey and are also "under high risk" of the drug pandemic.

"All are home to a rapid urbanization and industrialization that bring problems with them together, especially in terms of affecting people's psychological state," he said.

Though all details of upcoming strategic paper are not yet available, the deputy prime minister said one thing they would look was to monitor the drug use through examination of sewers.

"We will monitor traces of drugs in sewage waters. It will help us to see whether the drug use has increased or decreased in a given area," he said.

A pilot project was already launched in the southern city of Adana where wastewater was analyzed to determine the drug habits. Akdağ added they will also monitor street prices of drugs for a better analysis of the prevalence of drugs.

"For instance, increase in prices of different drugs with the same purity level means less drug is available in the market," he said.