Erdoğan, futsal team with Down syndrome, hit it off 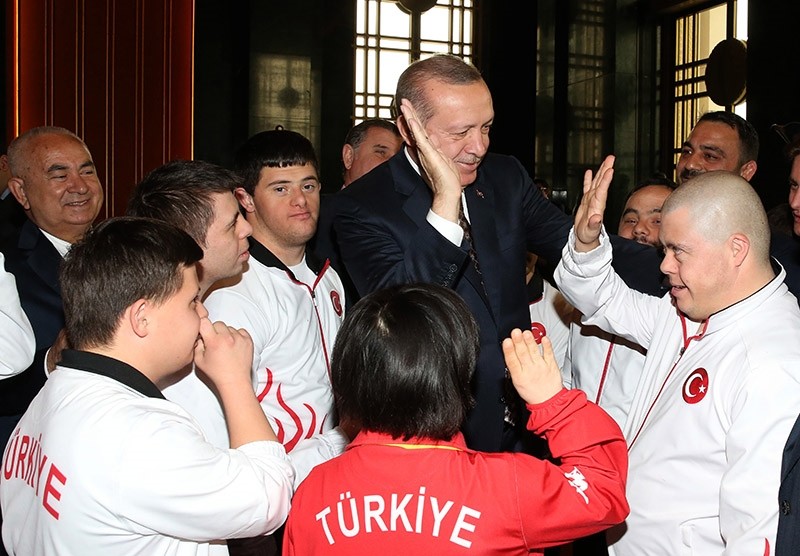 A former football player, President Recep Tayyip Erdoğan was quick to connect with the national futsal team with Down syndrome when he received them at the presidential complex on Thursday.

The team's visit, one day after World Down Syndrome Day, brought a challenge for its goalkeeper Hüseyin Dinç when Erdoğan got behind the football.

"You want a shot?" the president asked.

"I am totally ready for it," the goalkeeper replied.

"What are you better at, shots from the left or right?" Erdoğan then asked, and proceeded with a shot to the left when Dinç replied "right." To his credit, the goalkeeper skillfully tackled the shot anyway.

The futsal team then presented Erdoğan a jersey with his name and the number 53, which symbolizes the license plate name of his hometown Rize. "I am happy to host you here," Erdoğan told the team, before joining the team in chanting the "Turkey!" slogan.

The president talked to each futsal team member individually, handing out presents for their future practices.

Erdoğan said previously in an interview that "his adventure in football" began when he was 15 years old.

"We used to play with balls made out of paper in our neighborhood. While at the amateur club, Erokspor advised me to play in Camialtı, another leading amateur club in the 1970s. I played as a forward for Camialtı for seven years," he said.

After proving his football skills in Camialtı, Erdoğan was transferred to the professional club Istanbul Electric Tram and Tunnel Company (IETT) in 1974.

"I enjoyed five titles in my seven years at IETT. It was a personal milestone. I was the captain there," he said.