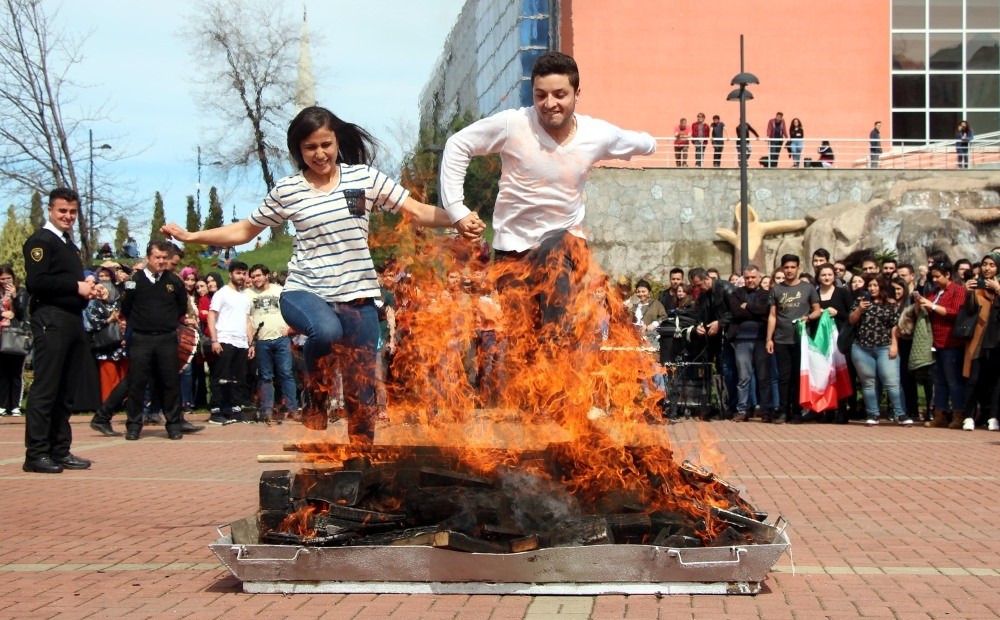 People jump over a bonfire in a Nevruz celebration in the northern city of Zonguldak.
by Daily Sabah Mar 22, 2018 12:00 am

Nevruz, a festival observed in a diverse group of communities and countries from the Balkans to Central Asia, was marked across Turkey yesterday. A celebration of spring common in Turkic nations, Iran and Afghanistan, it brought together people of different ethnicities and nations. All across the country, people jumped over bonfires and tapped eggs in the two most common forms of celebrations for the festival. Concerts were held and folk dance troupes performed at the events.

The first official ceremony for the festival, which means "new day" in a number of languages where it is observed, was held in northern city of Kastamonu. Kastamonu is designated as Culture Capital of Turkic World by TÜRKSOY, an organization formed by Azerbaijan, Kazakhstan, Kyrgyzstan, Uzbekistan, Turkmenistan and Turkey. Together with representatives from Turkic countries, Culture and Tourism Minister Numan Kurtulmuş lit up the traditional bonfire to mark the beginning of Nevruz.

Though it is widely celebrated all across Turkey with people traditionally jumping over bonfires, Nevruz has also an unfortunate association with the violence by the PKK terrorist group. The group, which claims to fight for Kurdish self-rule, has exploited the day to start bloody riots in Turkish cities in the past.

In Diyarbakır, a southeastern city with a predominantly Kurdish population, a political party known for its close links to the PKK, held a Nevruz celebration amid tight security measures, with crowd occasionally chanting slogans in favor of jailed PKK leader Abdullah Öcalan.

In Istanbul, a park in Topkapı district was the center of Nevruz celebrations attended by city's governor, diplomats from Turkic countries and a large crowd.

Speaking at the celebration in Kastamonu, Numan Kurtulmuş said the festival is important "for symbolizing renewal and almost a resurrection after a long winter."

"Nevruz also teaches us to be one despite differences. Like flowers blooming at the same time in the spring and having different colors that do not contrast with each other, we see people are one and together despite their differences," he said.

Nevruz, officially registered on the UNESCO List of Intangible Cultural Heritage of Humanity, is traditionally associated with Persian culture or rather, pre-Islam Zoroastrianism. However, Turkic nations also claim the festival has its roots in their Ergenekon saga.

In Turkey, the festival has been largely embraced by Turkoman tribes adherent to Alevi faith which is linked to Shiite Islam. Alevis also observed day as the birthday of Ali, a companion of Prophet Muhammad and the most revered figure in the Alevi faith. During the Ottoman rule of Turkey, the festival was observed by the palace by delivering sweets to the public.