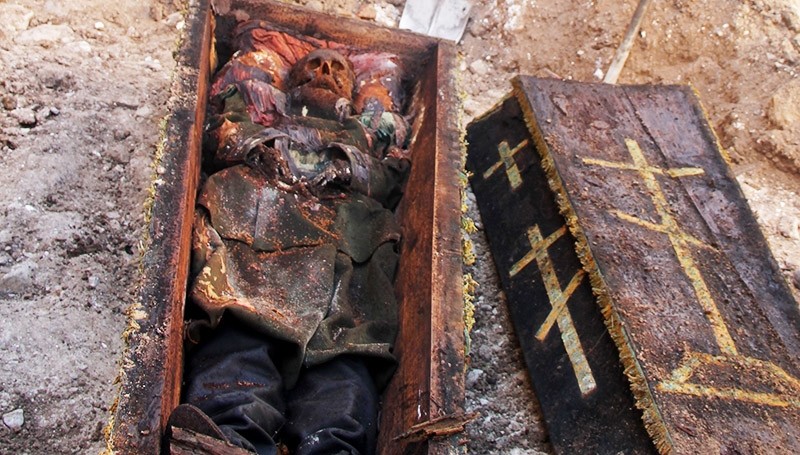 A uniformed corpse unearthed in Turkey's northeastern Ardahan province has been claimed by both Russia and Poland, putting Turkey in the middle of a diplomatic spat.

The casket was discovered in April 2017, during excavations to lay the foundation of a new building in Ardahan, a northeastern city once occupied by Russians before it was annexed to modern-day Turkey.

The deceased soldier was identified as the Polish-born Lieutenant Colonel Karl Karlovich Rjepetski from First Caucasus Army Corps' 20th Infantry Division, who died from illness in 1894.

Culture and Tourism Minister Numan Kurtulmuş told the Turkish parliament this week that Poland wants to give the body a proper funeral and burial, since the Rjepetski was born there and has descendants.

"Russia says, 'There was no Poland at the time... so this is our citizen. They want him to be buried in a graveyard in a Christian village in Ardahan," Kurtulmuş said.

"We are trying to solve the issue without creating a problem between the two countries," he added.

The discovery was followed by speculations regarding his identity and military rank.

The corpse was largely decomposed while the military uniform it wore and the corpse's beard remained intact.

Amid disputes over the identity and rightful ownership of the body, the corpse has been safeguarded in the Kars museum.

Rjepetski's family was from the Volynskyi region in the western part of Ukraine. He was trained in infantry military school in Warsaw. It is believed that his wife and two daughters lived in Tbilisi, Grodno and Moscow after his death.

At the time of his death, the funeral for Rjepetski, who was Catholic, was carried out by the Armenian Church because Ardahan lacked a Catholic church. The death certificate states he died of brain hemorrhage.