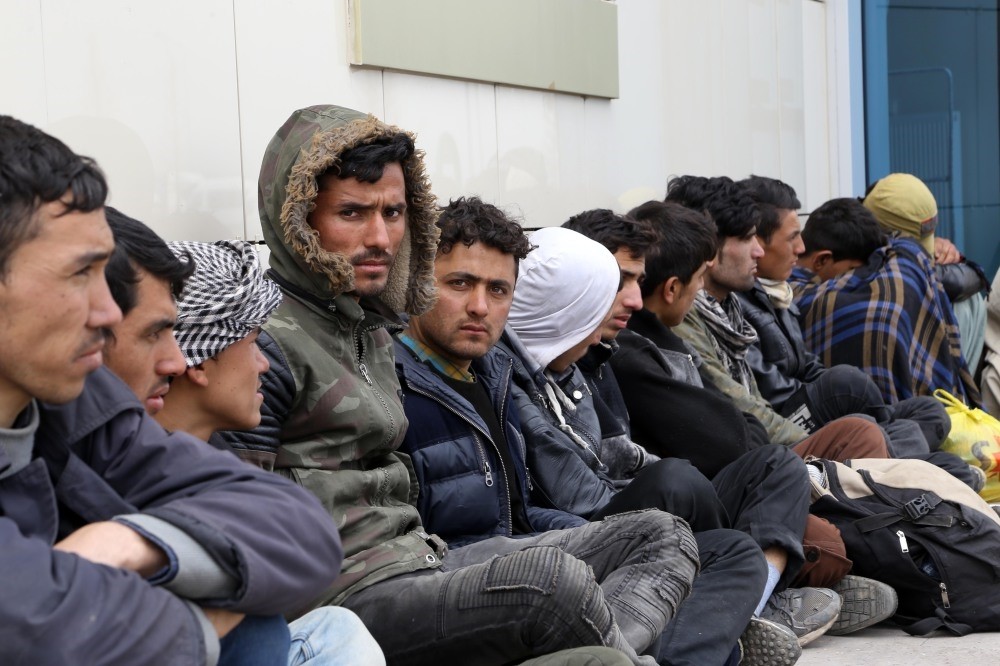 Migrants, including Afghans and Pakistanis, wait outside a police station after they were intercepted in Erzurum, April 3.
by Compiled from Wire Services Apr 05, 2018 12:00 am

Turkey's eastern borders have seen an unprecedented rise in illegal migrants, particularly Afghan nationals, trying to cross into the country, as smugglers strive to make the most before the completion of a border wall

An oasis at the gateway of Europe for its open-door policy for migrants, Turkey is now coping with a new influx of illegal migrants from Afghanistan and Pakistan. The flow of migrants, especially from Afghanistan where chronic poverty and security threats, is nothing new. Yet, within the first three months of 2018, 17,847 illegal migrants from Afghanistan were intercepted in eastern cities near the Iranian border. Compared to some 45,000 Afghan migrants intercepted last year, there is an apparent boom and it is partly tied to a rush of smugglers trying to profit as much as possible before the completion of a border wall to prevent illegal crossings, media reports say.

Although their movement across Turkey is strictly controlled, some Afghan migrants still stream into big cities to look for jobs while others want to cross into Europe.

Erzurum, an eastern city, is the main hub for migrants from Afghanistan and nearby countries. If they avoid capture in the smaller eastern towns, most migrants arrive in the city either to stay or to head for cities to the west like Istanbul and Ankara. The head of a local foundation, Erdal Güzel, known for his personal assistance to migrants, says there has been "a tremendous flow" in the past year. "I know at least 400 families from Afghanistan that settled in Erzurum."

Speaking to İhlas News Agency, Güzel said: "They usually board buses to Iran and are helped by smugglers who take them to villages on the border. They hide there, sometimes for days without food or water, before making a move to reach the border. Sometimes they had to walk for weeks in the mountains to reach the crossing points. Smugglers accompany them and help them evade detection."

Güzel added that local authorities are struggling to cope with the ever-increasing number of illegal migrants.

Media reports support the claim that the resettlement center housing migrants in Erzurum is already over capacity.

"These people are desperate. They risk their lives to reach here," Güzel said. Last month, 17 people, including Afghan and Pakistani migrants, were killed when a minibus overcrowded with migrants hit a utility pole and caught fire.

Afghan migrant Najibullah Yoldash was among 42 others who were found walking on a road connecting Erzurum and Erzincan. He said they were abandoned by smugglers once they arrived in Erzurum in January. "A minibus dropped us off on the road and [the smugglers] told us we could reach the bus station on foot in 10 minutes," he told Anadolu Agency (AA).

Braving freezing weather, they started to walk to the bus station, hoping to board a bus to Istanbul. They walked for about three hours on empty stomach but could not find the bus station. "It was snowing and we hadn't eaten anything for three days," Yoldash said.

On Tuesday alone, security forces held nearly 1,000 migrants, mostly Pakistanis and Afghans, in Erzurum. Most wait on main roads for security forces to pick them up after they manage to cross the border. Authorities then round them up and send them away to other cities with permits to live there, media reports say, in the absence of facilities to house them where they are detained.

Enver Ünlü, the governor of Iğdır, another border province and one of the main crossing point for migrants, said the unprecedented rise could be linked to the ongoing construction of the border wall.

Speaking in a televised interview, Ünlü said migrants want to cross into Turkey before the wall is completed. "We take measures, but it is impossible to completely cut the flow," he said, adding that security forces stepped up operations to crack down on smugglers bringing in illegal migrants.

Turkey is already home to the largest Syrian refugee community in the world with some 3.5 million from the war-torn country.

Turkey has been praised for its policy on refugees and providing services, including health and education. But it complains that the international community does little to help Turkey cope with the financial burden have been rife.