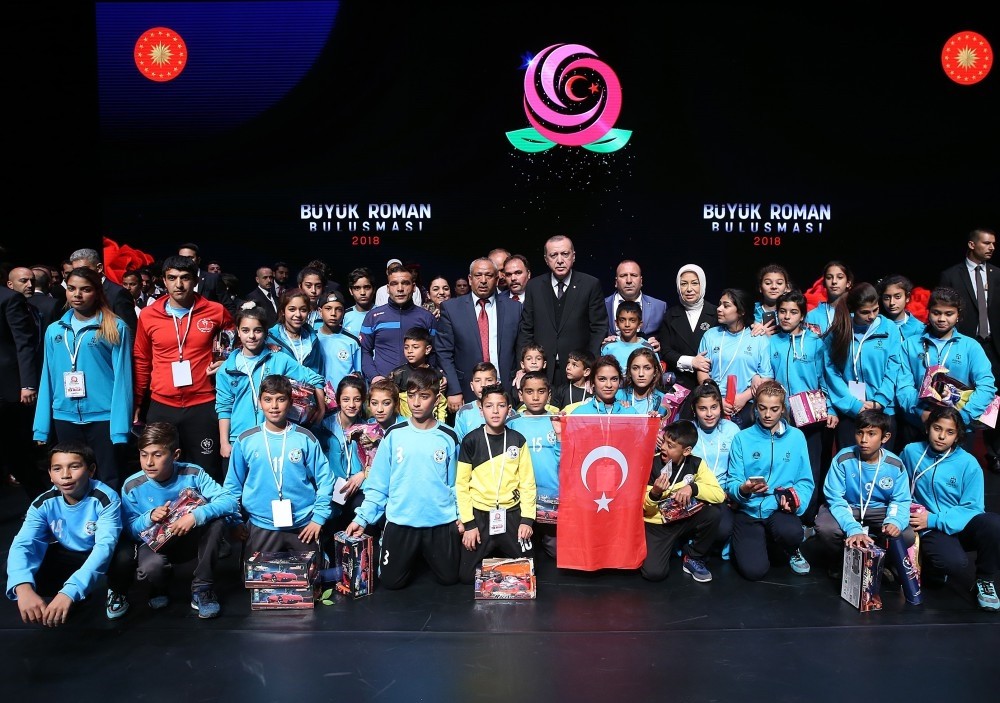 President Erdou011fan poses with a group of Roma students who attended the event at the Presidential Complex.
by daily sabah Apr 12, 2018 12:00 am

Roma citizens from across the country gathered at the Presidential Complex yesterday upon invitation from President Erdoğan, who takes pride in having grown up in a neighborhood with a Roma presence and lashed out at Europe's maltreatment of the community

A "Great Roma Gathering," as it is called, was held at the Presidential Complex yesterday. Members of the community from all across the country convened at the congress hall of the palace for the event hosted by President Recep Tayyip Erdoğan.

Speaking at the event, Erdoğan, who championed rights of the underprivileged community and spearheaded a drive to improve their lives, lashed out at Europe's maltreatment of Roma.

The event started with the recitation of Quran, followed by a song with religious themes sung by Kibariye, a renowned Roma singer. A Romani chorus accompanied the singer, who said she was "extremely happy" to be in presence of Erdoğan. "I am proud of being a Romani," she said after the performance.

A documentary about the Roma community's problems in the past was also screened at the event.

Greeting his audience in Romani, President Recep Tayyip Erdoğan spoke extensively about his childhood and youth in a neighborhood in Istanbul's Kasımpaşa, where a large Roma community lived.

"They are our brothers and sisters. Those people were my classmates, football teammates. They were hardworking people. We grew up together, we played together and we liked each other. I didn't see them as different people. We prayed to the same God and loved each other for His blessings," Erdoğan said.

The president underlined that he never "lost contact with my Romani brothers" and always embraced them before engaging in a harsh criticism of France for its treatment of the Roma community.

"A few years ago, they expelled the Roma from their country. You know how Nazi Germany persecuted Roma. These are the so-called 'civilized' nations but they don't have an iota of civilized behavior," he said.

Erdoğan then underlined how far Turkey has come in restoring the rights of this long-isolated community. "There has been discrimination [against Roma] and it still happens though it is rare nowadays," the president acknowledged.

He then spoke about what Turkey has done for the community during his tenure as prime minister and president.

"We removed some discriminating terms from regulations and laws in 2006 and in 2009. We launched the first workshop to address these problems. It was the first time that our Roma citizens had the opportunity to relay their problems directly to state officials at the highest level," Erdoğan said.

"Our Roma citizens have a custom of living in traditional houses than multistory apartment blocks. We halted the project for a while to offer them better options," he said. Erdoğan also said that Turkey has increased the sentences for hate speech, something the Roma community encountered much in the past.

Poverty and unemployment are two other obstacles for the Roma community. Erdoğan pointed out that they were gradually rolling out projects to improve education and living standards of the community.

"The government helped more than 5,600 Roma citizens to enroll in free vocational training courses in the past three years," he said.

Most Roma citizens work in low-level and low-paying jobs due to their limited access to education. The government has worked to help them access better jobs with better social security and seeks to encourage participation in free vocational training courses where participants are automatically employed in public services and private companies once they complete the training. The government will also deploy job consultants to help Roma citizens in employment.

An action plan exclusively for Roma citizens is gradually being implemented and as part of the plan, handicrafts that members of the Roma community have traditionally make a living from, like tinsmiths and basket weavers, will be helped to access larger markets and receive incentives to sustain their jobs, some of which are slowly going extinct due low demand.

The government will also launch a campaign for schooling Roma citizens. Education is one of the challenges plaguing the community, who often avoid enrolling their children in schools due to discrimination or because poverty forces the children to skip school to earn a living for their families.

Speaking at the event, Adnan Demirez, president of Federation of Istanbul Roma Associations, said the community has long been "alienated and ostracized" but regained their self-confidence and identity after Erdoğan's approach for improvement of their rights.

He extolled "an apology on behalf of the state" by Erdoğan in 2010 for the isolation of the community in the past.