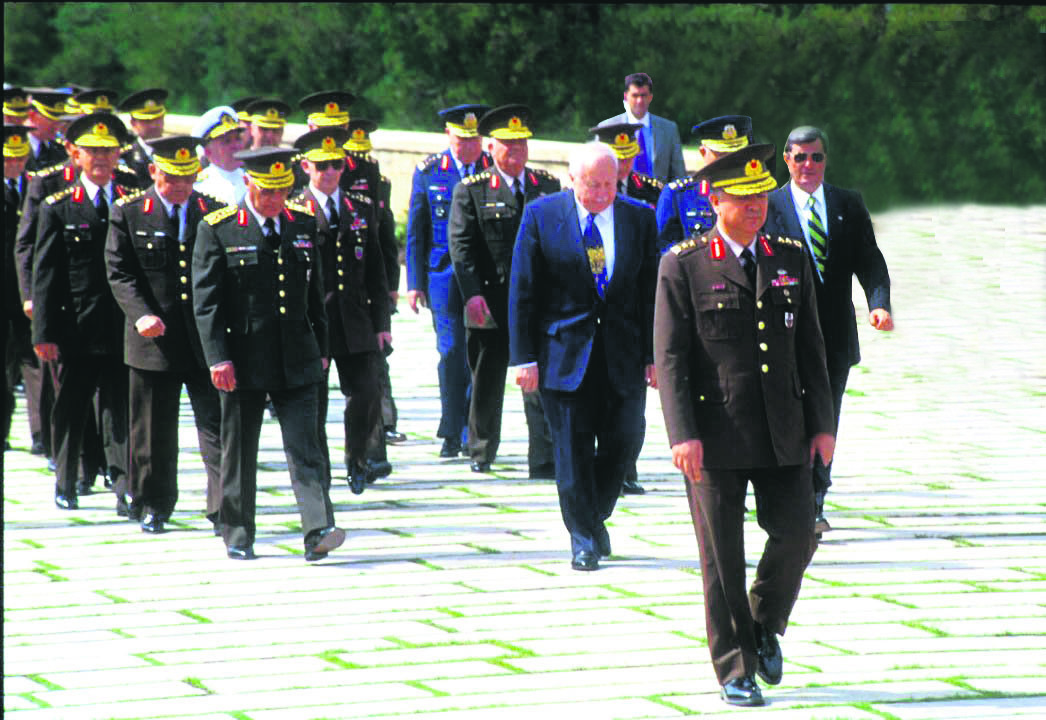 In a landmark decision, a Turkish court ruled Friday for aggravated life imprisonment for 21 suspects, including retired Chief of Staff Gen. Ismail Hakkı Karadayı and his deputy Gen. Çevik Bir, in the Feb. 28, 1997, post-modern coup case.

The sentence was reduced to life imprisonment, but the defendants were not arrested due to old age and health problems. The defendants were banned from leaving the country and will remain under judicial control.

An ultimatum to the government by the powerful military on Feb. 28, 1997, led to subsequent resignation of the government and further boosted a crackdown on mainly conservative people in the country. The coup did not involve bloodshed - hence it was termed postmodern - but it disrupted the lives of people forced to drop out of school, dismissed from their jobs and jailed on trumped-up charges.

Karadayı served as the chief of the military staff from 1994 to 1998, at a time when the army was putting pressure on then-Prime Minister Necmettin Erbakan and his conservative Welfare Party over "secular concerns." On Feb. 28, 1997, the military-dominated MGK threatened action if Erbakan did not back down. He resigned four months later, and the Welfare Party and its successor Virtue Party were banned by the Constitutional Court in Jan. 1998, and June 2001, respectively.

Within the scope of the Feb. 28 decisions, the "Batı Çalışma Grubu" (West Study Group) was founded and chaired by Bir, who was considered the "mastermind" of the coup plot, to control the proceeding of the decrees under the name of "Action Plan against Reactionary Forces."

Briefings on secularism were given, particularly to judges, civil servants and media executives, by members of the military. Repressive measures on religious segments of society were tightened, including a ban on headscarves at universities. A great number of civil servants were fired. Heavy censorship was imposed on the media, and opposition journalists were fired. Some companies saw embargoes imposed, on the pretext that they supported reactionary politics. "Reactionary" or "irticacı" in Turkish refers to a broad derogatory term used by hardline secular groups to brand any person with religious affiliation.

Özkasnak, a general who served as secretary-general at the office of the Chief of General Staff during the coup, had said in an interview that "postmodern" was "a very good adjective to describe this activity of the Armed Forces," in reference to the coup. He said he has done his duty in the process "that did not resemble the past coups."

"There was no bloodshed and nobody was upset. It was through democratic means and with the assistance of nongovernmental organizations," he said since then.

Gürüz, the former head of the YÖK that oversees universities, coordinated with the BÇG and blacklisted academics, university staff and students.

Ravza Kavakçı Kan, deputy chair of the ruling Justice and Development (AK) Party, hailed the verdict as an important turning point. "Putschists accounted for their crimes for the first time," Kan told Daily Sabah. The lawmaker herself was forced to study abroad due to the headscarf ban. Her sister, Merve Kavakçı, was a symbol of how the oppression of putschists prevailed, as she was prevented from swearing in as a lawmaker in 1999 while wearing headscarf. "It was a dark era for everyone. People's lives were turned into a nightmare," Kan said. She added that they hope the verdict and trial would set in motion more investigations and trials for non-military actors who helped the coup.

Reşat Petek, a lawmaker who serves on Parliament's Human Rights Committee and was head of an inquiry committee into the July 15, 2016 coup attempt, told reporters outside the courthouse that Turkey is no longer a country "that allows coups." "I hope every victim of the coup, from young girls forced to take off their headscarves before entering their school and mothers not allowed to visit their sons serving in the military took a breath of relief when they heard the verdict," he said.

Despite the leaders of the so-called post-modern coup believing the system they imposed would last 1,000 years, it collapsed in five due to heavy-handed politics of the time and an economic crisis in 1999. Erbakan's government was followed by a string of coalition governments whose unsuccessful administrations paved the way for economic catastrophe. After turbulent years, Erbakan's protege, Recep Tayyip Erdoğan and his Justice and Development Party (AK Party) gained an overwhelming majority in the 2002 general elections. The party, in power since then, pledged to reverse the damage done by coups, starting with lifting the headscarf ban for public sector employees.

Media, civilian helper of the coup

One common request from victims of the 1997 coup is bringing civilians involved in it to justice, as well. There is not any ongoing investigation yet into alleged media involvement in the coup. Media played a prominent role in paving the way for the coup with incessant propaganda serving the interests of the secular elite against Islamists. Playing on fears of secularists that Turkey would be a new Iran with a shariah regime under Erbakan, newspapers and TVs churned out reports either ridiculing Muslims or portraying any act of praying or remark as a sign of creeping Islamization. For them, Muslims or anyone with a pinch of piety were malicious if not outright anti-regime, as a quick check of prominent newspapers from that period, shows. Eerily reminiscent of today's far-right mindset that ties anything concerning Daesh or other terrorist groups to Muslims, media run stories discriminating against anyone viewed as religious.

Hürriyet, formerly the flagship newspaper of Doğan media conglomerate, led the campaign with attention-grabbing headlines decrying actions tarnishing Turkey's secular image. Veiled warnings toward the government from the military also splashed across the front pages of newspapers at the time. Erbakan's hosting of spiritual leaders at the Prime Ministry and a play with religious undertones sponsored by a municipality were targets of the media's defamation. On TVs, students praying or scandals at Quran courses were main items on the news with coverage amounting to Islamophobia.