Migrant flow to Greece surges along with Turkish crackdown on smugglers 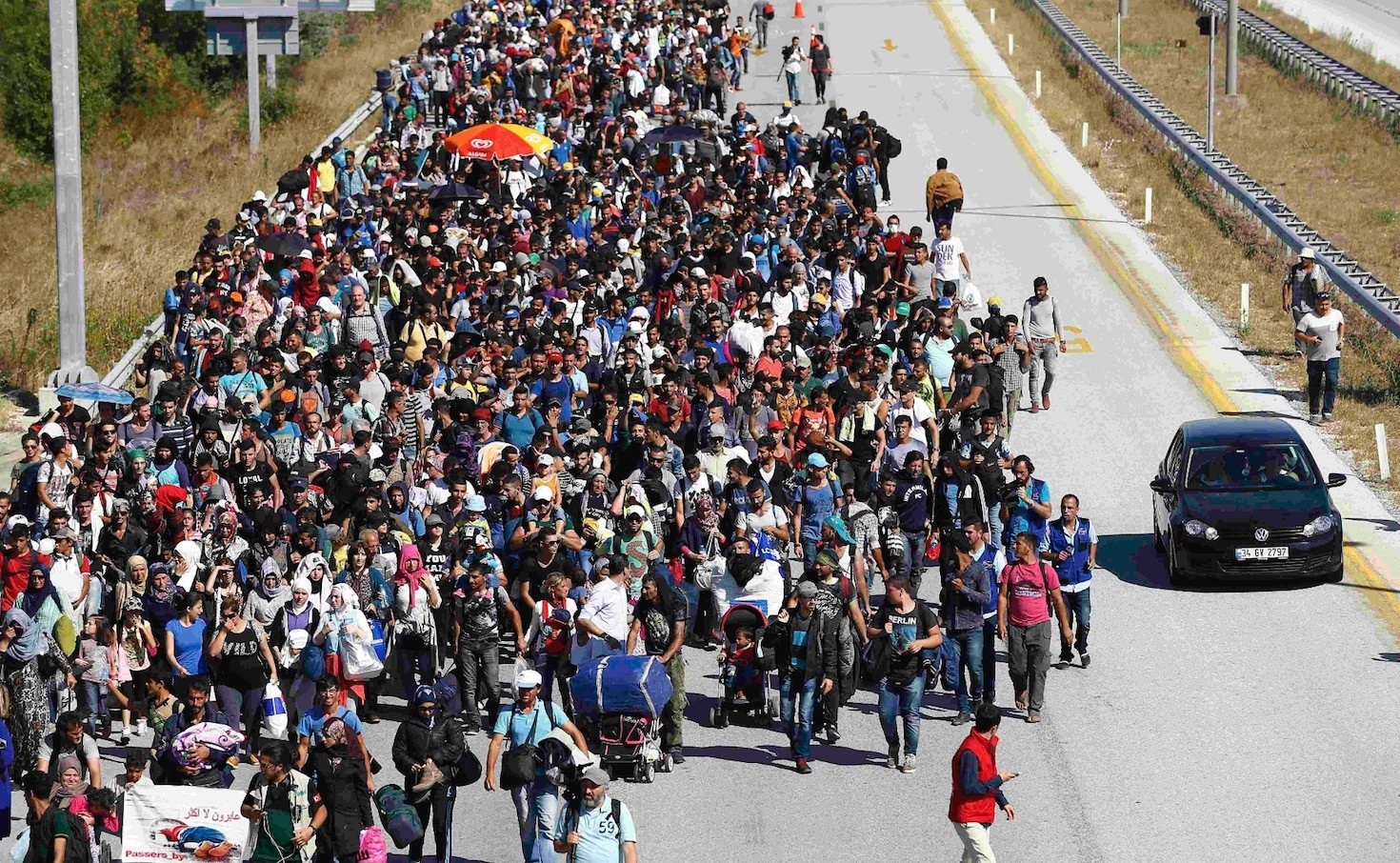 Three years after this mass walk by Syrian migrants to Greece from Turkey, Greece is seeing a renewed rise in the number of migrants using the land border for crossings.
by Daily Sabah with AP Apr 18, 2018 12:00 am

Greek authorities report an increase in the number of migrants passing over the land border with Turkey, with 510 people intercepted in two days, while eight human smugglers were arrested in the border city of Edirne

The Greek islands in the Aegean Sea brim with refugees and migrants complaining of bad conditions and while migrants crossing over the land route complain of being pushed back into Turkey by Greek border enforcement. Yet, this does not daunt people from war-torn and impoverished countries to take their chance with crossing into this gateway of Europe without getting caught. Greek authorities say hundreds of migrants made their way into Greece through the Evros River, forming part of the Greek-Turkish border, over the past two days. Police said yesterday that they detained 370 people and another 140 people were held yesterday. The land route from Turkey into northeastern Greece has become increasingly popular as conditions deteriorate on the Greek islands, long the preferred route, where strict controls are now imposed on movement and camps are overcrowded. Authorities have noted a surge in arrivals across the Evros River, with 1,658 people detained in March compared to 586 in February and 262 in March 2017.

On the Turkish side of the border, tightly monitored by soldiers and cameras, Turkish officials strive to prevent crossings especially at a time of improving weather conditions attracting more migrants to try crossing into Greece. In Edirne, the province where a busy crossing to Greece is located, gendarmes captured 10 smuggling suspects. A court ordered the arrest of eight yesterday while two others were released with judiciary control. Security forces are now looking for a fugitive suspect. Smugglers are accused of organizing the crossing of 93 people, including Syrian, Pakistani, Afghan and Iraqi nationals, into Greece. The migrants were intercepted in operations in Edirne's border districts.

EU countries have been seeking ways to curb the flow of refugees to the continent, especially after the civil war in Syria has displaced millions.

Greece has long been the first destination for refugees and migrants setting out on a journey to Europe from Turkey, be they Syrians or nationals of Middle Eastern or Asian countries. Although it embraced refugees seeking permission to cross into other European countries, particularly Germany, for the past three years, Greece has slowly become an unfavorable place for refugees and migrants due to its worsening attitude and horrid living conditions that are forcing them to return to Turkey.

Last year, dozens of refugees and migrants who entered the country with the hope of seeking asylum were found bruised and beaten near the Turkish border and claimed they were illegally deported back to Turkey. Pushback is an illegal practice under international conventions and Greece never acknowledged whether its security forces were involved in pushing back the migrants. Reports in Turkish media say Greece has pushed back some 4,000 illegal immigrants last year. Based on the accounts of the allegedly illegally deported migrants, Greek police officers are accused of confiscating valuables and torture.

Turkey and the EU signed a deal in 2016 to curb the illegal immigration through the dangerous Aegean Sea route from Turkey to Greece. Under the deal, Greece sends refugees held on the Aegean islands where they crossed to from nearby Turkish shores, and in return, EU countries receive a number of Syrian migrants legally. The deal, reinforced with an escalated crackdown on human smugglers and more patrols in the Aegean, significantly decreased the number of illegal crossings.

However, some desperate migrants still take the better-policed land border between Turkey and Greece, especially in winter months when a safe journey through the Aegean is nearly impossible aboard dinghies. Greece, which struggles to cope with the huge influx of migrants especially after a civil war in Syria displaced millions, is already criticized for decrepit conditions in refugee camps on its Aegean islands that prompted protests by migrants held there for months awaiting approval of their asylum application.