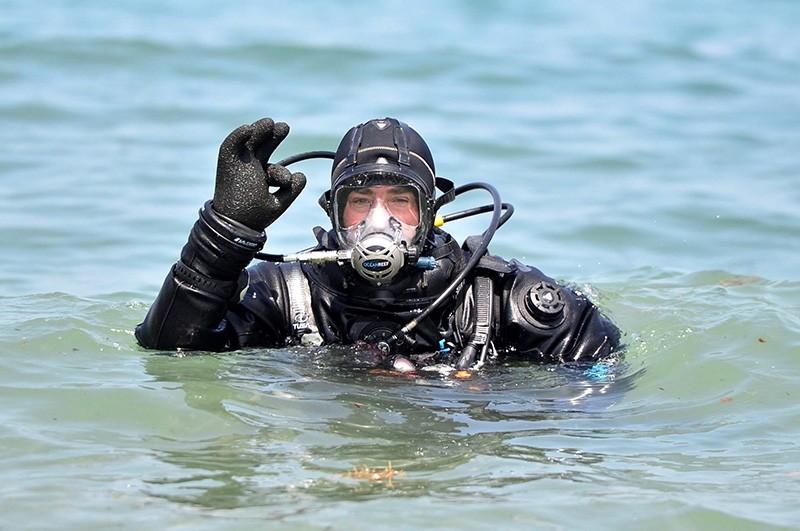 A Turkish diver, dubbed as the "Aquarium Man," prepares to break a new world record of the longest open saltwater scuba dive in cold water on April 23.

Together with his 20-people strong team, Cem Karabay, a lifelong lover of the sea, is working very hard every day at Underwater Marine Park in Gökçeada Island, the largest island of Turkey.

The existing record in the same category was held by Norwegian diver Nils-Roar Selnes, who spent 15 hours and 10 minutes underwater in Eidkjosen, Norway in 2016.

Karabay's goal is to eliminate Selnes's record by spending 23 hours and 4 minutes underwater. "If I break this record, I would have broken the hardest record in my life," he told Anadolu Agency.

This time, he will try to break the record on the 20th anniversary of Troy being added to UNESCO World Heritage List and when Turkey's National Sovereignty and Children's Day is marked.

The Troy, located on the mound of Hisarlık overlooking the plain along the Turkish Aegean coast, is one of the most famous archeological sites in the world, with its 4,000 years of history.

"Everybody supposes that Troy is in Greece. Through this to-be record, we would like to both achieve a significant victory and to remind everyone in the world that Troy is in Turkey, in Çanakkale [district]," Karabay says.

He held the 2011 Guinness World Record for the longest scuba dive in a controlled environment [in a pool in Istanbul], which lasted 192 hours, 19 minutes and 19 seconds.

During his attempt, Karabay will meet every basic need like eating and sleeping underwater. In addition, he plans to do sports.

It is the "easiest thing" for him to eat and drink, he claimed. "I am able to comfortably eat, drink water and do sports and sleep underwater."

But, there are challenges that he needs to stand against. "I will both fight against the cold and [onshore] current," he said. "It will be a very hard attempt."

Cem Karabay believes with his all heart and soul that he will overcome all the difficulties and break the record.

The Guinness Representative in Turkey and Referee Şeyda Subaşı Gemici will follow every moment of Karabay underwater.

His attempt could also be watched live on his website www.cemkarabay.com.

The Turkish diver is dedicated to continuing his record attempts. His next goal is to break all the world records in the longest open freshwater scuba dive category.