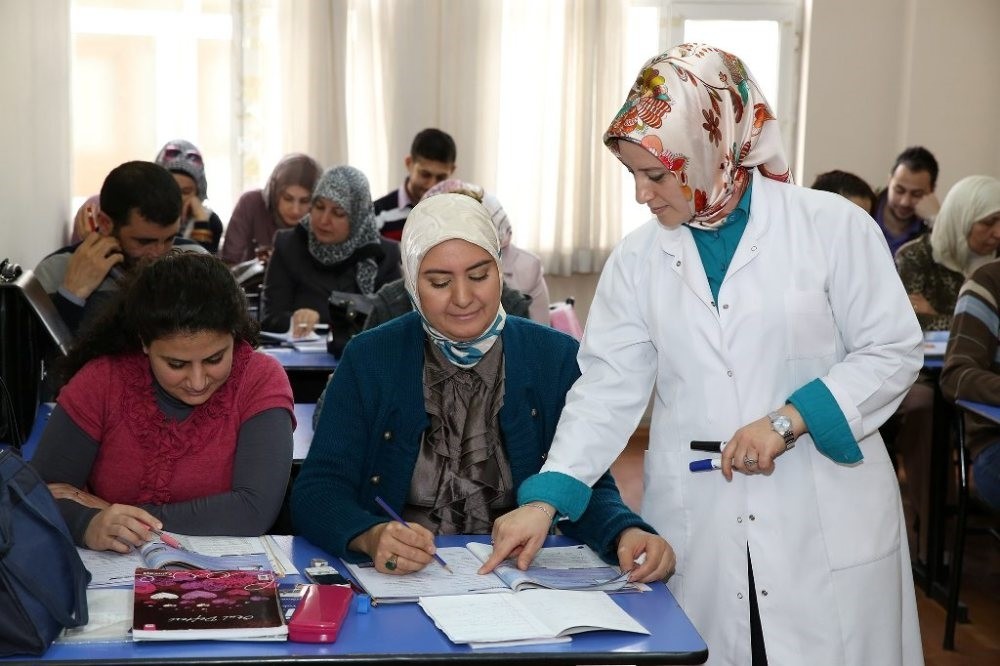 A teacher helps Wafa Mourad, a Syrian woman, in a Turkish class run by a local municipality in Istanbul.
by Daily Sabah May 01, 2018 12:00 am

A survey by the nonprofit KADEM Association laid bare the problems female Syrian refugees in Turkey face. The language barrier is the main problem for women according to the survey whose results were announced in an event yesterday under the title ‘Culture Meeting'

Turkey's leading women's nonprofit organization, the Women and Democracy Association (KADEM) released the results of what activists called the most comprehensive field survey on the state of female refugees from Syria. The survey's results, released during a "Culture Meeting" event bringing together Turkish and Syrian women, indicate that language is the main barrier for female refugees to integrate more into social life in Turkey and make new friends.

The country hosts more than 3.5 million refugees from war-torn Syria. It is the largest Syrian refugee community in the world where millions displaced by the ongoing conflict that began in 2011 seek shelter in regional countries.

At a press conference with Turkish academics who served as the authors of the survey, KADEM President Sare Aydın Yılmaz said the survey sought to assess the problems women who live outside refugee camps in the border cities encounter. Only a small fraction of refugees live in camps set up by the state-run Disaster and Emergency Management Authority (AFAD), which also sponsored the survey. The rest live on their own in houses they rent or bought all across Turkey or in housing units provided by charities.

Yılmaz says the survey showed that the female refugees are mostly young, between the ages of 19 and 24. A total of 5,150 women living in Istanbul and the capital Ankara were interviewed for the survey that consisted of 93 questions regarding life in Turkey. "Istanbul and Ankara are cities with a dense population of Syrian refugees," Yılmaz said on the reasons for choosing the two locations for the survey. The cities also provide ample opportunities for work and education for refugees, according to 60 percent of the interviewees.

A question on if they have Turkish friends revealed how language remains an obstacle for their better integration. Only one in every four refugee women says they have Turkish friends. A total of 79.7 percent of women say it is because they "don't speak Turkish" that they could not make friends, while 10.4 percent say their immediate circle of acquaintances are entirely Syrian and they can only communicate with people of their own ethnicity. Some 10.4 percent say Turkish and Syrian culture are not different.

Turkey has so far spent more than $30.2 billion on the well-being of this displaced population, but integration remains a key issue to be addressed. Experts say refugees have to overcome the language barrier for better integration. A recent survey by another nonprofit organization has revealed that refugees were reluctant to use health services offered to them due to a lack of Turkish knowledge and were uninformed about free services offered by Turkey because of the language barrier. The same barrier also discourages Syrians from enrolling their children into schools in the country. Ankara cooperates with international and local nonprofit organizations to spread Turkish education among the refugees and training qualified ones among the refugees, such as doctors and nurses, for work in hospitals and clinics serving the refugees.

According to the survey, 94.4 percent of interviewed women did not work in Syria and only 22.7 percent expressed willingness to join the labor force in Turkey. However, the survey also shows women have a lack of knowledge on how to join the labor force in the country. Turkey introduced a work permit program for refugees a few years ago on a limited basis. A total of 58.1 percent of women interviewed said they could not receive a work permit while 23.4 percent said they do not have information on employment conditions in Turkey. Only 9.4 percent have proper jobs.