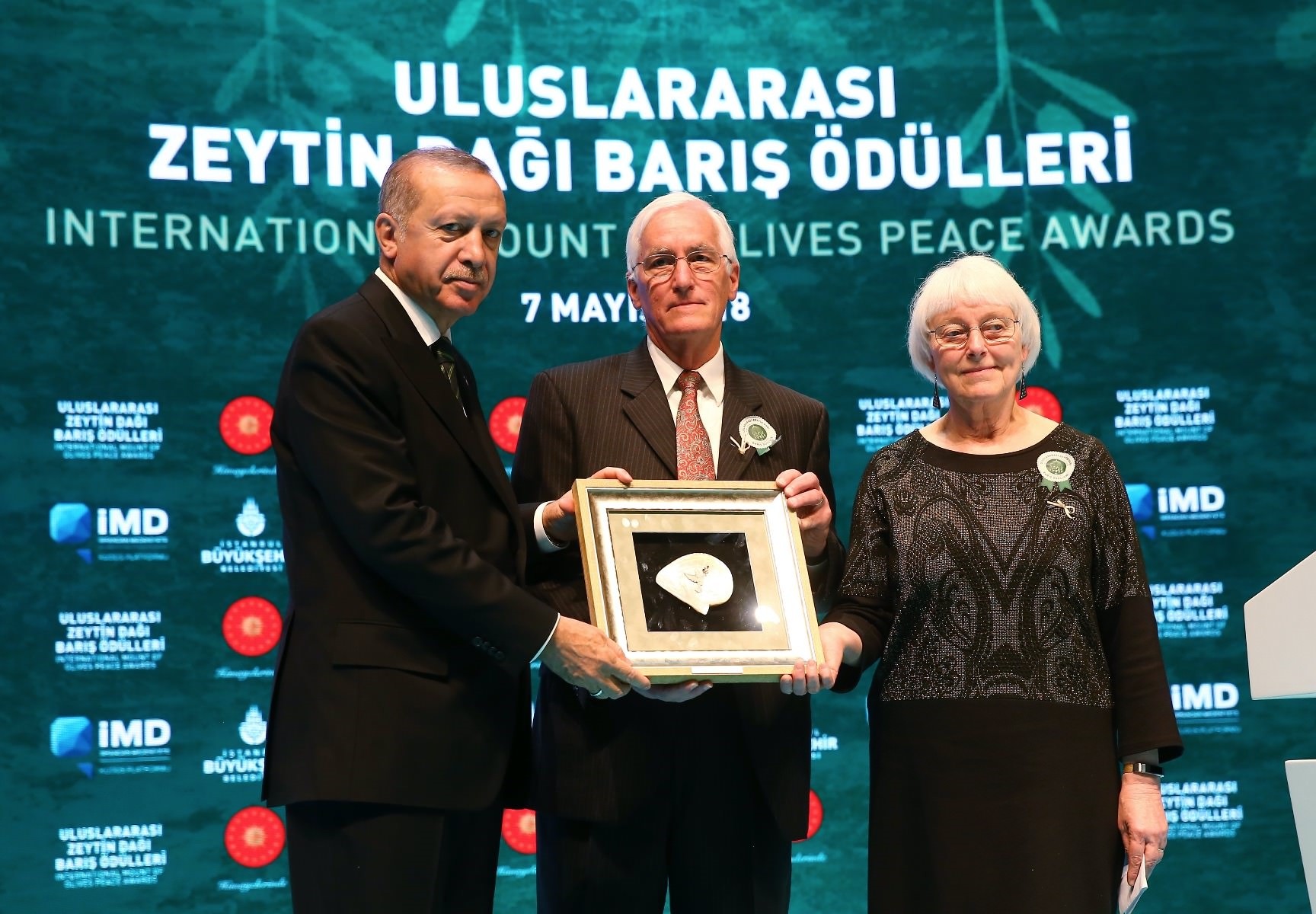 President Recep Tayyip Erdou011fan presented a posthumous award for activist Rachel Corrie to her parents Cindy and Craig Corrie.
by Daily Sabah May 08, 2018 12:00 am

Turkey's Jerusalem Platform, an organization endorsed by the presidency, handed Mount of Olives Peace Awards yesterday to activists who helped give a voice to the plight of Palestinians amid Israeli occupation.

The ceremony, which was held in Istanbul and was inaugurated by President Recep Tayyip Erdoğan, recognized four people for their peace efforts. Named after the famous mountain in Jerusalem, a sacred city for Judaism, Christianity and Islam, the awards came at a time when Turkey rallied the international community to oppose the U.S. decision to move its Israeli embassy to Jerusalem, a controversial move for Palestinians claiming rights to the city for their future state.

Recipients of two posthumous awards were Rachel Corrie and Naji al-Ali, while Benjamin Ladraa and Nur Fitri Taher were present at the awards ceremony. Rachel Corrie, whose ultimate sacrifice for resistance against the Israeli occupation of Gaza made her an internationally beloved figure, was crushed to death by an Israeli bulldozer while protesting the demolition of a Palestinian home on March 16, 2003. Corrie, an activist for the International Solidarity Movement supporting Palestinians against Israeli oppression, was 24-years old at the time of her death and was only in her second month in Gaza when she joined the protest against the demolition. "I'm witnessing this chronic, insidious genocide, and I'm really scared and questioning my fundamental belief in the goodness of human nature. This has to stop. I think it is a good idea for us all to drop everything and devote our lives to making this stop," Corrie had written to her mother one month before her death.

Corrie's parents Cindy and Craig received the award at the Istanbul ceremony, thanking Turkey's solidarity with the family. Corrie's mother said Rachel was in Gaza as a world citizen and world citizens needed to reject destructive nationalism and racism more than ever. She noted that Jerusalem was a universal city and should belong to world citizens, and Palestinians should be given their rights back.

Another posthumous recipient of the award was Naji al-Ali, a Palestinian cartoonist killed in London in 1987 in an assassination suspected to be carried out by Israeli intelligence. Al-Ali, a political activist in his youth, is probably most renowned Arab cartoonist in the world and is primarily known for Handala or the Handhala character he created. A 10-year-old boy whose back turned to the viewer and hands clasped behind his back, became a symbol of Palestinian cause and defiance against oppression.

Benjamin Ladraa, a Swedish activist whose latest stop in his march from Sweden to Palestine is in Turkey, is recognized for his efforts for peace at the ceremony. The 25-year-old Ladraa hit the road, a journey of some 5,000 kilometers, after a lengthy trip to Palestine last year. With a Palestinian flag and keffiyeh, Ladraa continues his journey where he meets supporters of Palestinian cause and shares his experience online with #walktopalestine hashtag. Ladraa said at the ceremony that he believed in justice and the dignity of people. "They call us activists. It implies that people other than us are not active. Why shouldn't we be active, while there is an occupation, children are imprisoned, and people are shot during peaceful demonstrations? Why don't we take action?" he said.

Nur Fitri Taher, another recipient, is an Indonesian woman who founded Adara Relief International and is known for her work for a Gaza-bound aid flotilla and her relief work for Palestinians. "We should care more. Only then, Palestine will be free," Taher said in a brief speech at the ceremony.