Thousands in Istanbul protest Israeli bloodshed, relocation of US embassy 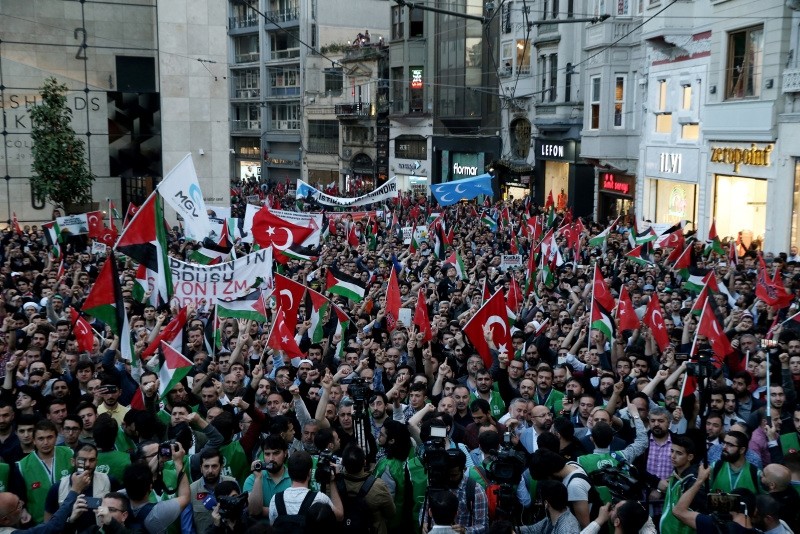 Thousands have gathered in Istanbul's Istiklal Street to condemn the U.S.' decision to relocate its embassy to Jerusalem and the Israeli bloodshed in the Gaza Strip.

Demonstrators carried banners that read "Al Quds belongs to Palestinians," the Arabic name of Jerusalem, in a rally organized by several NGOs under the name "Raise Your Voice Against Occupation."

Speaking at the event, Bülent Yıldırım, head of the Humanitarian Relief Foundation (IHH), the main organizer of the event, said the relocation has reignited an awakening for Muslims and encouraged them to put up a fight against the Israeli occupation.

He also called for protests to continue throughout Muslims' holy month of Ramadan outside the Israeli consulate in Istanbul.

IHH was the main component of the Gaza Freedom Flotilla, an international movement aiming to end the Israeli-Egyptian blockade in Gaza. On May 31, 2010, Mavi Marmara ferry, the main ship of the flotilla, was raided by the Israeli soldiers in the international waters of the Mediterranean. The raid led to the deaths of 10 activists - nine aboard and one of wounds four years after the raid - and left dozens of others injured. The incident added further tensions to the strained ties between Israel and Turkey, which were only recovered through a normalization deal in the summer of 2016.

"Gaza has been under blockade for years. West Bank is in a great destruction. The forces who are trying seize Jerusalem today with the encouragement of the U.S. and other Western forces should know that those who are resisting in the world, standing next to the oppressed in the region, while never give up on fighting," youth branch Chairman Burkay Düzce said.

Israeli forces killed 55 protesters and injured nearly 2,500 more in Gaza protests against the opening of the U.S. embassy in Jerusalem on Monday.

President Recep Tayyip Erdoğan accused Israel of being a "terror state" and carrying out "genocide" and also announced three days of national mourning over the deaths, as well as a giant protest in Istanbul on Friday.

Deputy Prime Minister Bekir Bozdağ told reporters in Ankara that Turkey was recalling its ambassadors to the United States and Israel "for consultations."