Taxis vs Uber: Yellow taxis eye makeover in fight against the app 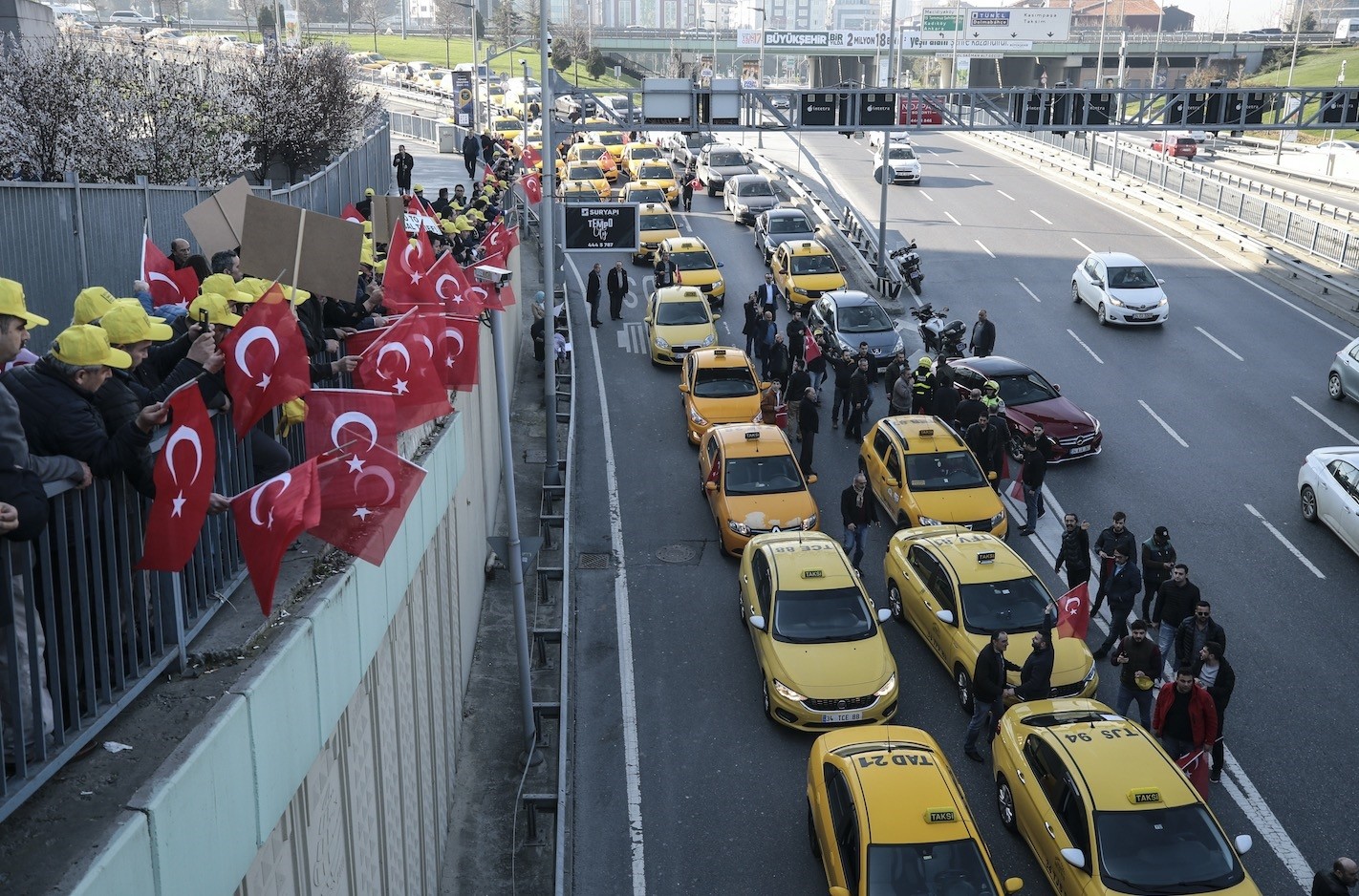 Taxi drivers stage a rally outside an Istanbul courthouse prior to a hearing of a trial against Uber in March.
by Daily Sabah Jun 04, 2018 12:00 am

Turkish taxis will be replaced with newer, safer models as authorities pledge an end to illegal transportation services by Uber, the popular ride-hailing service being sued by Istanbul taxi drivers

With a pledge by authorities for a stricter ban on the popular ride-hailing app Uber, taxi drivers are now looking to clean up their act, with a little help from the Istanbul municipality. Under new regulations, taxis will be required to be from the D-segment of the car market classification. That means taxis will be high-end vehicles, such as premium models of German-made cars. They will replace the decrepit old cars dominating the taxi sector in Istanbul.

Luxury taxis in black instead of traditional yellow cabs have already started operations at Atatürk Airport in January and now they will be available all across the city. Authorities tax the taxi owners less if they purchase the D-segment cars which are commonly used by Uber.

Its silent foray into the Turkish market in 2014 was largely unnoticed but popular ride-hailing service Uber found itself increasingly the target of taxi drivers in Istanbul, the only Turkish city where it is available. A well-publicized lawsuit by taxi drivers against Uber and a string of assaults against drivers working for the app revived a debate on the crumbling state of taxis competing with luxury cars and well-mannered drivers Uber offers.

President Recep Tayyip Erdoğan signaled on Friday that Turkey will join several other European countries that have banned the ride-hailing service, saying that "the Uber controversy is over." "This Uber business that came about, it's over. There's no such thing anymore," Erdoğan said in a speech. "We have a taxi system," he said, adding that a personal taxi system would not be allowed to destroy the business of Turkish taxi drivers. "We will be the ones to make the decision [on Uber]."

Turkey is not the only place where Uber's push for a global expansion while giving short shrift to local rules about workers' rights and taxi licenses created disputes. Uber has been banned or forced to leave the market in Bulgaria, Denmark and Hungary. It has limited service in France, Italy, Germany, Japan, and Taiwan. Uber has also lost its license in London, although it is still operating there pending appeal, while its self-driving car program in the United States suffered a major blow with a deadly accident.

Meanwhile, Uber's operations in Turkey have sparked growing controversy, with taxi drivers protesting against what they say is unfair competition and illegal business practices by the ride-sharing service.

The next hearing of the lawsuit filed by taxi drivers against Uber is scheduled to be held today in Istanbul and the court is expected to hear Uber's lawyers arguments against the drivers' call for a ban.

Uber drivers in Istanbul had already been hit with TL 18.92 million ($4.20 million) in fines by Turkish police in the first five months of this year under regulations against illegal transportation. The app more or less replaced "pirate taxis", unmarked cars without registered plates allocated for taxis that were once popular in the city.

The 17,400 official yellow taxis in Istanbul are a pillar of the city's often patchy transport system, but critics say that poor quality service and overcharging have given Uber an opportunity.

In their fight against Uber, taxi drivers risked further blows to their already tarnished image, with a string of attacks against the drivers of the popular app. Uber drivers found themselves victim to sometimes physical assaults by taxi drivers and in one notorious case, several yellow taxis were photographed surrounding an Uber van, blocking its way in a protest that later turned violent when they tried to punch the driver.

Taxi drivers did not shy away from attracting controversy with their remarks as well. Eyüp Aksu, head of a taxi drivers' association hinted that they would "burn down someplace" if the court did not rule for a ban, while another association's director openly endorsed fellow drivers' attack on an Uber van. Both remarks, viewed as a call to violence, sparked public outrage.