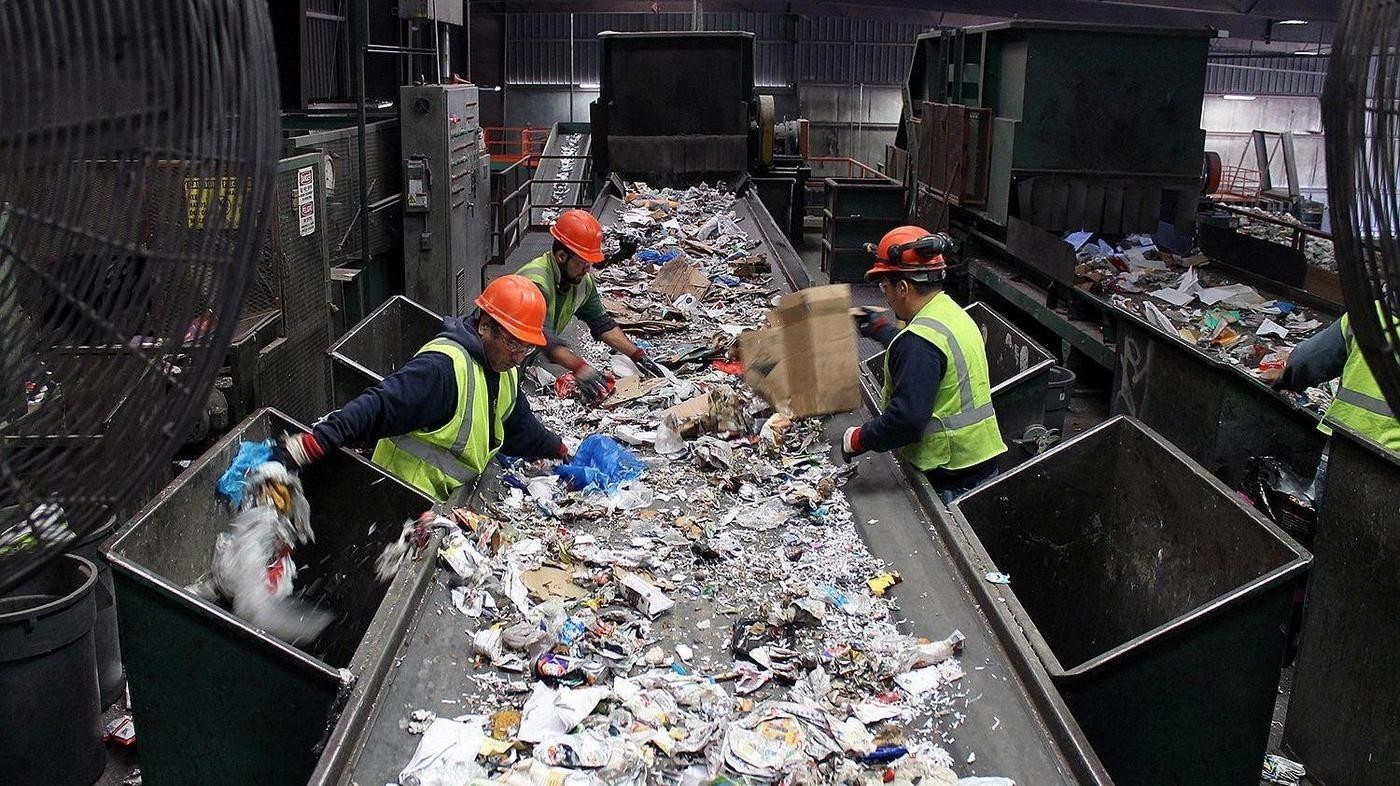 An operator lifts stacks of waste paper at a waste management facility in Diyarbaku0131r. The zero waste project aims to promote recycling and saving trees all across the country.
by Daily Sabah Jun 05, 2018 12:00 am

It has been almost a year since first lady Emine Erdoğan launched a zero waste campaign to promote recycling. Now recycling is more commonplace than ever before - from the presidential complex to restaurants

The Zero Waste Project launched 11 months ago by First Lady Emine Erdoğan is picking up the pace as the Prime Ministry and Parliament switch to a zero-waste policy today. The project involves saving everything from papers to discarded metals for future use or recycling them. It is difficult to tell how much Turkey has saved thanks to the campaign but nowadays most places - from the presidential complex to restaurants - are joining the campaign through their own recycling practices.

The sprawling presidential complex, which hosts the presidential office, a convention hall and a large mosque, recycled almost 14 tons of paper waste in the first five months of this year alone. Thus, it saved 238 trees used in paper manufacturing from being chopped off. In total, some 29,655 kilograms of packaging waste were gathered at the complex.

Figures by Anadolu Agency (AA) on recycling efforts at the presidential complex show the zero waste project helped prevent 173,600 cubic meters of greenhouse gas emissions. Some 9,580 kilograms of the plastic waste from the complex was used in the production of textiles, pipes, bottles and dumpsters. The presidential staff, from those working in the kitchen, to high-level bureaucrats are instructed to use recycling bins all around the complex.

In the recent years, Turkey has started to prioritize waste management over concerns of rising environmental damage with municipalities responsible for garbage collecting upgrading their waste management systems. The country also looks to curb food waste, particularly in the form of 12 million loaves of bread every day.

The goal of the project is to apply zero waste practices everywhere, in the public and private sectors, from hospitals to shopping malls, by 2023, the centenary of the foundation of the Republic of Turkey.

A primary school in the eastern city of Van is among those joining the campaign. Akköprü School in Tuşba district was awarded for its environmentalist administration that managed the recycling of 8 tons of papers, 2 tons of plastic and 350 kilograms of used batteries in two years. Equipment used at the school is also made of recycled material.

"We take our students to field trips to waste management plants so that they can see how the garbage they produced is processed. We wanted them to be more conscious about recycling," school Principal Mehmet Tahir Arslan told AA.

The school does not stop at recycling. It sells the discarded material and buys saplings for students to plant. "There are 14 million students in Turkey and you can roughly save 140,000 tons of paper every year from being wasted," he says.

Elsewhere in Van, the İpekyolu district houses are perhaps Turkey's only "recycled alley." The small alley adjacent to busy Cumhuriyet street is adorned with recycled materials and venues made of discarded plastic and metal waste, from a shelter for pets to armchairs made of old barrels and bookshelves.

In Edirne, a city bordering with Greece and Bulgaria, zero waste campaign has taken over its famous fried liver joints. Instead of dumping the unsold food, restaurant owners gather street cats - the only non-human fan of the dish - and feed them with liver while the bread is given to street dogs.