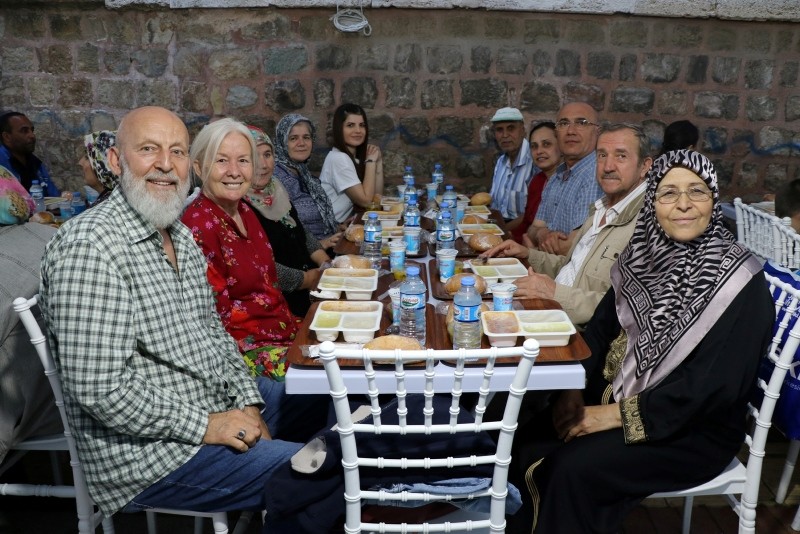 Members of the Jewish Community of Turkey and the Chief Rabbi Foundation held an iftar (Muslim fast-breaking) dinner in the northwestern province of Edirne on Monday.

Around 1,100 people attended the dinner, which was held near Edirne's landmark Selimiye Mosque.

Speaking at the dinner, Edirne Governor Günay Özdemir called the dinner a good example of how people from different faiths can live together in peace.

Ishak Ibrahimzadeh, the president of the Jewish Community of Turkey, said this is the fourth such interfaith iftar dinner.

Ibrahimzadeh said he was happy to see that every year the people of Edirne show more interest in the special dinner.

Turkey, home to many members of faiths other than Islam, is enlivened with street iftars every Ramadan, the sacred Muslim month where every Muslim is obliged to abstain from eating and drinking from anything from dawn to sunset. On tables set up all along the streets, locals in most neighborhoods break their fast with water, dates or pide, a local flat bread consumed the most in Ramadan. Regardless of their religion, dinners funded by local municipalities, are open to anyone.

Churches also occasionally organize iftar dinners for Muslim neighbors. Panayia Greek Orthodox Church in Istanbul's Beşiktaş district made the headlines in 2016 when it hosted an iftar dinner in the church's courtyard.