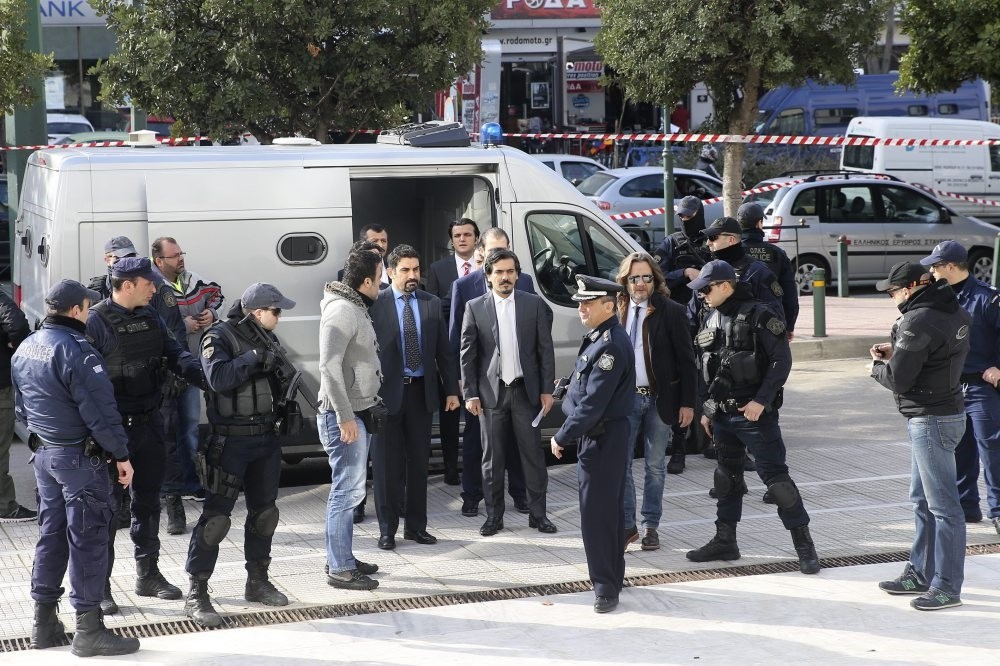 Putschist soldiers wearing dapper suits arrive at a Greek court for a hearing in 2017. All of them were released late May.
by Daily Sabah Jun 12, 2018 12:00 am

After releasing and granting asylum to FETÖ-linked military officers involved in the 2016 coup attempt in Turkey, Greece looks ready to further embrace the putschists as it decided to provide them with armed guards

Eight putschist soldiers who fled to Greece from Turkey after a foiled coup attempt two years ago are reportedly enjoying unprecedented privileges.

"We are enforcing the greatest possible measures to secure their safety in a place which for obvious reasons will remain unknown. We haven't forgotten what happened in our region a few months ago," he said. The Guardian said he was referring to the extradition of six FETÖ suspects from Kosovo to Turkey.

Turkey pursues a global campaign to bring suspects linked to the terrorist group to justice but often faces obstruction by Western countries. Greece under the Alexis Tsipras government said it sought to end past hostilities with Turkey but keeps offering shelter to terror and coup suspects instead.

All eight suspects were freed late May pending a ruling on their asylum applications. Greece has so far granted asylum to one of the putschists, while the cases of the others remain pending though the authorities are expected to grant them asylum as well.

Last month, Greece's top administrative court rejected objections to an asylum request for Süleyman Özkaynakçı, one of the suspects wanted by Turkey, sparking outrage in Ankara. Özkaynakçı and the others hijacked a military helicopter and fled to Greece when the coup was thwarted.

The officers are wanted in connection with their role in the coup attempt's Istanbul leg. When the coup attempt failed, they fled the headquarters of the 66th Mechanized Infantry Brigade in the city where they were deployed. The military base served as the meeting place for a group of putschist officers, who are accused of gathering there two days before the attempt to discuss the details. Four people, including Col. Sait Ertürk, were killed at the same base in a clash with pro-coup troops.

Turkey repeatedly asked for their extradition but Greek courts sided with the putschists, ruling that they would not get a fair trial if deported to Turkey.

"These [suspects] are enemies of Turkey. They attacked its people and the state. Turkey and Greece are NATO allies and these people they are harboring pointed their guns at a member army of NATO. So, what Greece has done violates the rules of the alliance and have no place in neighborly ties. No European Union country can have a law protecting putschists," Çelik said.

The Turkish minister said Greek officials thought they could "obtain some military secrets" from the officers. "They think they can use them and it is quite possible as [suspects] are members of FETÖ. FETÖ has no nation or country and is a useful tool for anyone [against Turkey]. Probably, they promised to serve some people in Greece," he said.

Çelik added that Greece's sheltering of putschists would always be "a central point" in Turkey-Greece relations.

Turkey earlier condemned rulings not to extradite coup suspects as "politically motivated." The two countries, which have a past tainted by hostilities, recently sought to improve their relations and have agreements in place in the fight against terrorism.

Due to its location at the gateway of Europe, Greece has been a popular destination both for migrants and fleeing FETÖ suspects after Turkey escalated a crackdown on the terrorist group in the wake of the coup attempt.

Turkish border security has stopped dozens of FETÖ suspects on the land border with Greece, while the Turkish Coast Guard has prevented a large number of the group's members from fleeing to the Greek islands near Turkish shores since the summer of 2016.