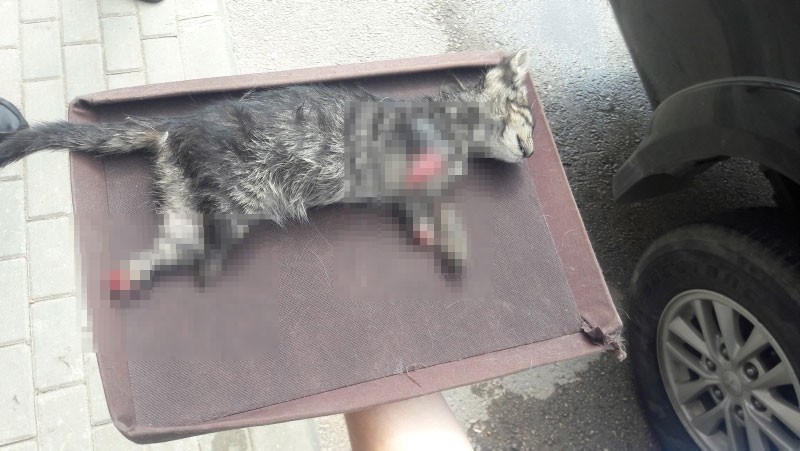 With outrage still fresh over the torturous killing of a puppy whose legs and tail were chopped off, a similar incident surfaced in Turkey on Wednesday, this time the victim a defenseless kitten.

The one-month-old kitten was found by passersby in the Millet neighborhood of Yıldırım district in northwestern Bursa province with all four of its paws cut off, dumped on the sidewalk and left to die.

The municipality's veterinary teams and police rushed to the scene but were too late as the kitten had already passed away.

Police say they have launched a wide-scale investigation into the incident to capture the perpetrator.

The brutal murder has sparked a new wave of public outcry, with citizens calling on the government to take immediate legal action to end violence and abuse against animals once and for all.

Authorities on Saturday also arrested a man after shocking images emerged online of a puppy with all four of its paws and tail amputated. The black puppy was found Wednesday in a forest area of Sapanca town in Sakarya in northwestern Turkey with its paws and tail cut off. Video footage showed the puppy being treated by a veterinary, but it could not be saved.

After huge public outcry, an investigation was launched and a heavy construction machine operator working to clear roads in the area was detained, aslocal authorities and people were trying to clear the resort town's name.

Meanwhile, the wife of the operator said in a message posted on her social media account that his husband was detained hurriedly and without evidence just to calm the public , while the real perpetrators are roaming free.

A day after the incident, five puppies were found dead in the campus of Sakarya University while two others were rushed to the veterinary in an injured condition.

The incident in Bursa also comes a day after a man was arrested for raping, assaulting and killing a 3-month-old kitten in Istanbul.

Taking into consideration the gravity of the crime and the indignation it will create in society, the 12th Istanbul Criminal Court of Peace on duty ordered for the arrest of the 50-year-old man, marking the first such ruling on charges of "raping an animal, unjustly killing an animal with an owner and rendering useless any animal."

In another incident on Sunday, a man who was captured by security cameras while beating a stray dog in the entrance of a building in Istanbul's Kadıköy district was recognized by locals in the street, beaten and handed to the police.