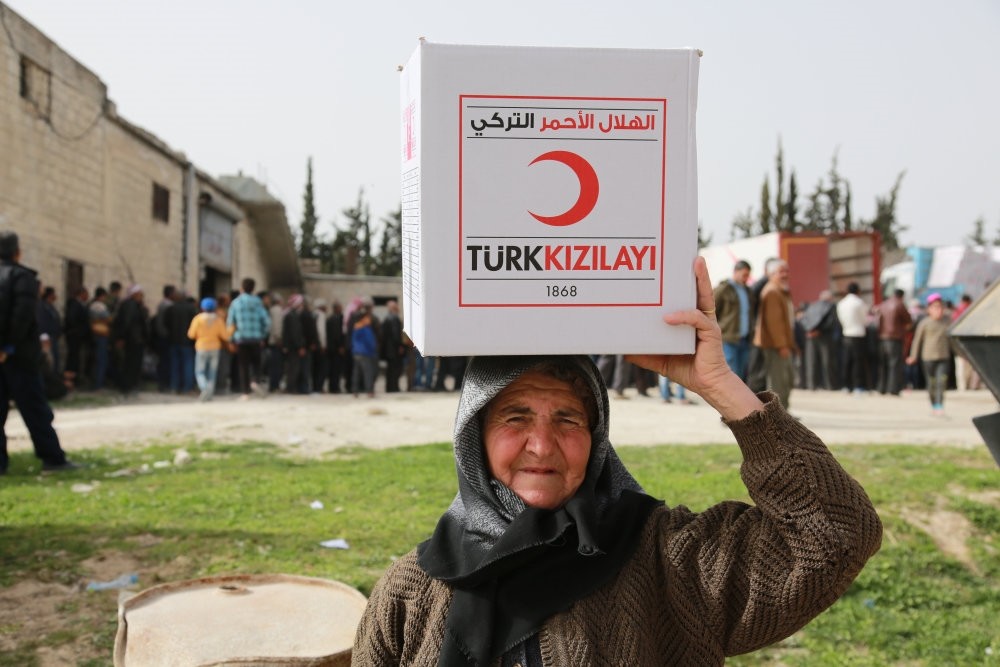 The U.N. humanitarian aid agency U.N. OCHA will allocate $2.3 million for Turkish Red Crescent to aid internally displaced people in Syria as Turkey leads the humanitarian efforts in the country

The Turkish Red Crescent and the United Nations Office for the Coordination of Humanitarian Affairs (U.N. OCHA) signed a cooperation protocol on Friday to help the internally displaced in war-torn Syria. Under the protocol, the U.N. agency will deliver $2.3 million this year to Turkish Red Crescent for the latter's humanitarian efforts in Syria.

The deal further cements Turkey's role as the leader in efforts to aid displaced Syrians. The country is already home to the largest Syrian refugee community at 3.4 million people, but it also works to provide a steady lifeline to internally displaced people living in camps on the Syrian side of the Turkish-Syrian border. U.N. OCHA already delivered $8.8 million to Red Crescent for its Syria operations.

Turkish Red Crescent's aid to Syrians ranges from shelters in relatively safe areas of the conflict-ridden country, to delivery of food and other basic humanitarian needs to the displaced.

Speaking at a ceremony for signing of the protocol, Ramesh Rajasingham, the United Nations Deputy Regional Humanitarian Coordinator for the Syrian Crisis, said Red Crescent's work in Syria was of vital importance. He highlighted that the Turkish agency's support for local nonprofit organizations within Syria saved the lives of thousands of people.

Rajasingham said aid sent by trucks to Syria through the Turkish border composed the core of cross-border aid operations, adding that there was no other way to help the needy in Syria. He also underlined professional support by Red Crescent to humanitarian aid workers and its role as leader of logistics for aid operations since 2012 (one year after the uprising in Syria escalated into an all-out civil war). Turkey's lengthy border with Syria has been closed since the war began, other than for humanitarian aid delivery and occasional opening for refugees arriving in Turkey or those returning to their homeland from Turkey. Rajasingham said Syria's northwest suffered from a dire humanitarian crisis.

U.N. OCHA's new funds for Red Crescent is the sixth tranche of package of funds supplied for the needs of displaced Syrians since 2015. The U.N. agency will first release a $1.1 million fund and then send the remainder of the funds in January. The money will be used for 8,000 truckloads of humanitarian aid. Since U.N. OCHA launched the aid project, 30,000 truckloads of humanitarian aid were sent to Syria. This year's funds will be divided among some 250 international, Turkish and Syrian non-profit groups.

Speaking at the ceremony, Alper Küçük, deputy general manager of Turkish Red Crescent, said it was the largest fund granted to a Turkish agency by the United Nations. Outlining their efforts in Syria, Küçük said they employed hundreds of staff for the efficient delivery of humanitarian aid to Syria. He added that they sent humanitarian aid worth $400,000 roughly on a daily basis to Syria.

The Turkish Red Crescent delivered humanitarian aid worth more than TL 532 million ($113.1 million) last year to the needy across the world. The charity's president Kerem Kınık told Anadolu Agency (AA) on Friday that they reached out to about 8.6 million people in 46 countries in 2017 for humanitarian aid.

The charity, which marks its 150th anniversary this year, is among the contributors to Turkey's yearly humanitarian aid that made it the world's most charitable country in 2017 according to a report by an international development agency.

Kınık says Turkey allocates more to humanitarian aid every year and formed a "Turkish model" in the world for efficient aid delivery. He said the Red Crescent reached out both to people in Turkey's immediate region and to the far corners of the world. "We delivered aid to about 8.635 million people in 46 countries and the past month of Ramadan alone, we aided 3.5 million people," he said, referring to the holy Muslim fasting month which is traditionally marked with Muslims engaged in charity work.

Red Crescent delivered 13,000 tons of aid to drought-hit Somalia and another 11,000 tons of humanitarian aid to war-torn Yemen. In Syria, it spent TL 400 million to address the basic needs of the displaced. "We supplied cash aid worth TL 926 million to 1.1 million refugees, particularly Syrians, and gave education aid worth TL 26 million to 137,000 refugee children," Kınık says, noting that the aid "helps millions to cling to life again and ensure the survival of tens of thousands of people."