Fight against smoking: Shorter shifts for non-smokers, sales ban for under 21s considered 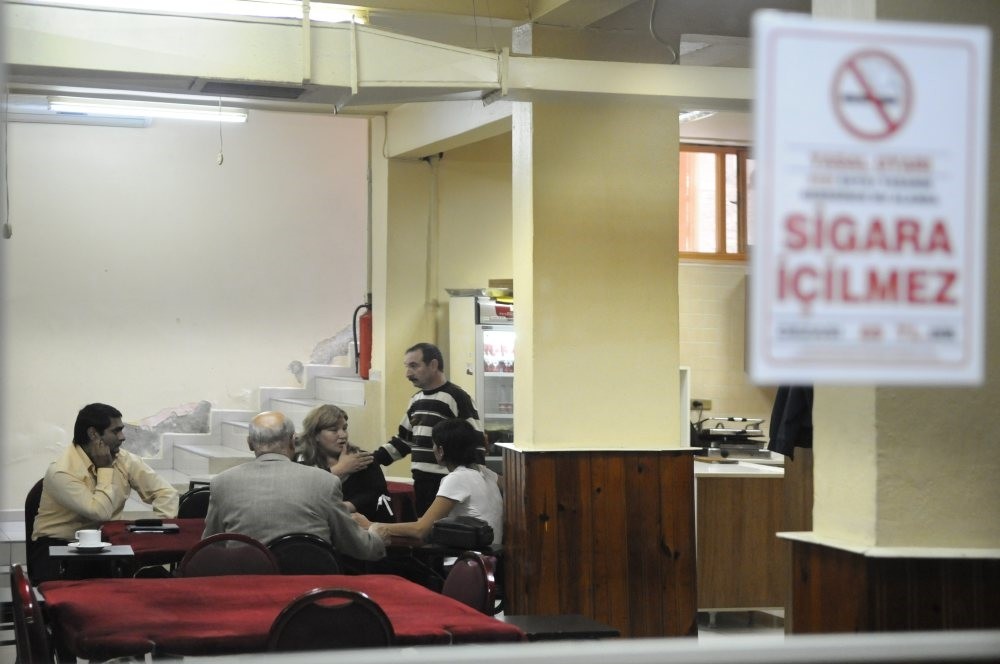 A no smoking sign on the window of a coffeehouse. A smoking ban has been in force in restaurants, cafes and similar establishments since 2009.
by Daily Sabah Jun 25, 2018 12:00 am

Turkey announced new measures in the fight against smoking, from shorter shifts for non-smoking employees to a ban on the sale of cigarettes to people under 21

In the ninth year of a nationwide campaign, Turkey plans to go further to better enforce a smoking ban and encourage more people to quit the habit.

Deputy Prime Minister Recep Akdağ, who was health minister when the smoking ban in public spaces was introduced in 2009, unveiled the 2018-2023 action plan for tobacco control in an interview with Anadolu Agency (AA). The plan includes shorter shifts for non-smoking employees of companies to increasing the minimum age for eligibility to buy cigarettes and other tobacco products from 18 to 21.

Smoking has been one of the habits most associated with Turks for decades and even created the expression: "To smoke like a Turk." According to figures after the smoking ban in restaurants, bars, cafes, stadiums, hospitals and similar establishments, the prevalence of smokers decreased. Increased taxes on cigarettes and free medical treatment for smokers aided the decline in the habit. Still, authorities are determined to stamp out smoking, which still prevails among youths and kills more than 100,000 people every year due to diseases linked to smoking. The smoking rate was 31.6 percent in 2016, a decline from 32.5 percent in 2014.

One aspect of the plan is affirmative action for non-smokers. A series of regulations under consideration include a 30 minute shorter shift for non-smoking employees, an additional seven-day leave each year for non-smokers and smaller social security contributions. Companies with no smoking employees will be offered tax reductions and will be encouraged to hire non-smoking personnel. The government also ponders increasing child and family benefits for non-smokers. The action plan also includes "quit and win" campaigns to award people who quit smoking.

The action plan, prepared with the assistance of non-profits for tobacco control, focuses on decreasing access to tobacco products, raising awareness of the dangers of smoking and encouraging more people through affirmative action for non-smokers. For the awareness campaign, authorities plan to concentrate on eradicating the image of smoking as normal behavior. School children are the focus of the campaign, and every subject in the curriculum, from Turkish and mathematics to the sciences, will have anti-smoking themes. The plan also aims to spread the anti-smoking message to animated movies and TV shows for children. Another leg of the campaign puts role models in the spotlight for anti-smoking messages and making vocational groups, such as police, doctors, nurses, teachers and soldiers smoke-free, for that matter. "Smoke-free" state institutions will also be encouraged.

Turkey will also turn to celebrities, from actors and actresses to popular social media figures, to spread the anti-smoking campaign. Messages to deter smoking will be placed on website ads and ads before and during videos in video-sharing websites. Millions will also be texted about the dangers of smoking and secondhand smoking.

Family health centers, which serve as small clinics in every neighborhood and villages, will offer treatment to quit smoking. Currently, only hospitals offer services to kick the habit.

For smokers who fail to kick the habit, the action plan brings tougher measures that expand the ban in public. Laws will be implemented to better enforce the smoking ban outside shopping malls, airports and public buildings and within the vicinity of these places. The ban will also expand to children's playgrounds and call to further restrict areas where smoking is allowed in restaurants, cafes, universities, swimming pools and beaches.

One landmark change to the ban is legal action for supervisors of public sector employees violating the smoking ban. Currently, only smokers violating the ban are subject to fines.

Turkey also considers finally introducing plain packaging, an issue long debated in public over its efficiency. Under the action plan, plain packaging to reduce the attractive nature of glossy cigarette packs will be implemented next year. Promotion of tobacco products in sales venues will also be limited.