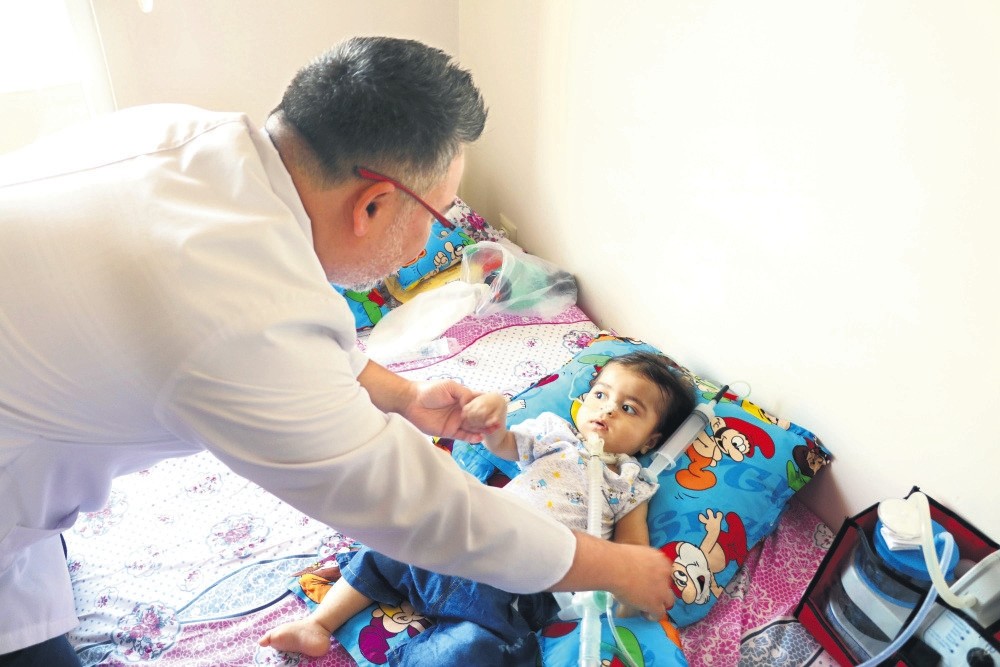 A Turkish doctor visits Mohammad at his family home in Gaziantep.
by Ihlas News Agency
Jul 07, 2018 12:00 am

Mohammad Taheri, an eight-month-old boy diagnosed with spinal muscular atrophy, a rare disorder, clings to life thanks to Turkish philanthropists and the Health Ministry. The family of the infant was seeking help abroad as a vital drug for his treatment was unavailable in Iran where sanctions imposed by the United States restricted access to imported medicines for many patients. A group of businesspeople in the southern Turkish city of Gaziantep collected 250,000 euros needed for the purchase of the drug but could not transfer the money to family, again, due to sanctions on money transactions to Iran. The Health Ministry intervened and sent a private plane to transport Mohammad to a hospital in Gaziantep. The boy has been at the hospital where he underwent treatment for a week and will be given medication imported to Turkey soon. He will stay in a house rented by donors before his treatment resumes.

The boy's Turkish doctor Sedat Işıkay said that the disease is otherwise terminal but a new drug may help them to cure it. Spinraza, the first approved drug used in the treatment of spinal muscular atrophy, will arrive next week and after two more weeks of treatment, Işıkay hopes that the boy will recover.

Mohammad's father Javad says his son was "getting weak every day" when he was one-month old and after he was diagnosed with spinal muscular atrophy they sought a treatment in Iran. "We found out there was no treatment or drugs available in Iran. We were recommended this hospital in Gaziantep. I thank the doctors and others for bringing us here. We feel like home. The doctors are very helpful and they take good care of our son. We are eternally grateful to the doctors, businesspeople and the Turkish nation for helping us," he said.