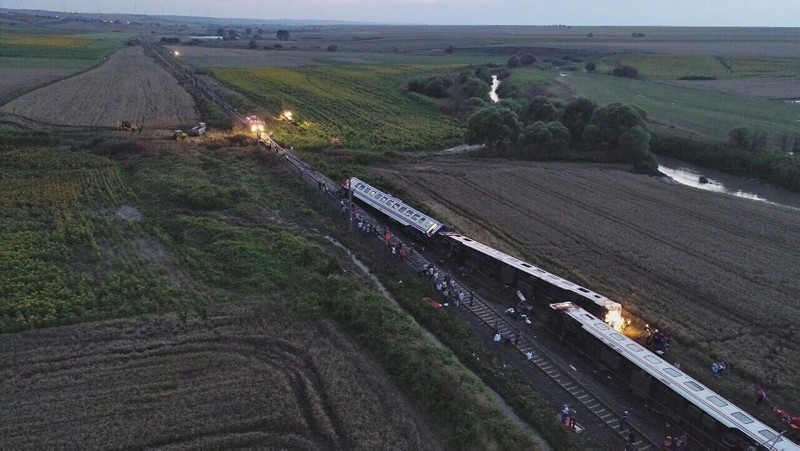 At least 24 people were killed and 124 others injured Sunday after a passenger train derailed in the northwestern Turkish province of Tekirdağ.

"Twenty-four of our citizens have lost their lives [in the accident]," said Deputy Prime Minister Recep Akdağ in a press briefing in Tekirdağ on Monday.

Akdağ said that search and rescue operations in the region were completed as of 6 a.m. local time.

The death toll was initially announced as 12, but climbed to 24 as search and rescue efforts proceeded.

At least seven victims are minors, with the youngest victim only 10 months old.

Minister of Transport, Maritime Affairs, and Communications Ahmet Arslan said during the same meeting that routine controls on train rails, which have to be done once a year, were conducted in April.

Arslan said five carriages of the train's six cars, with 362 people on board, traveling from Uzunköprü, Edirne to Istanbul were toppled near Sarılar village of Tekirdağ's Çorlu district after the railway track slid down from its original spot due to torrential rains.

Footages from the accident scene showed that the earth filling under the tracks near a culvert was washed away.

Tekirdağ Governor Mehmet Ceylan said injured people have been evacuated from the scene of the accident with helicopters.

Over 100 ambulances were sent to the scene, public broadcaster TRT Haber said, quoting Health Ministry Undersecretary Eyüp Gümüş. The Turkish army said in a statement that it had also sent helicopters to the scene.

As the accident scene was located among fields, rescuers had a hard time reaching it due to muddy dirt roads after heavy rainfall.

President Recep Tayyip Erdoğan and Prime Minister Binali Yıldırım offered their condolences to the victims' families after being briefed about the accident.

Erdoğan said all state institutions were "using every means available to help" in a statement issued by the presidency, as he vowed that there would be a comprehensive investigation into the "tragic accident."

Turkey's audiovisual authority RTÜK said the government had issued a temporary ban on broadcasting images from the scene late Sunday. This was lifted on Monday morning.

Turkish authorities under Erdoğan have in recent years sought to modernize Turkey's once-ramshackle rail network, building several high-speed inter-city lines. Turkish passengers have in general preferred taking planes or buses for inter-city travel but this has been changing with the new high-speed lines.

The train involved in the accident appeared to be one of the slower passenger trains traveling on a single track line.