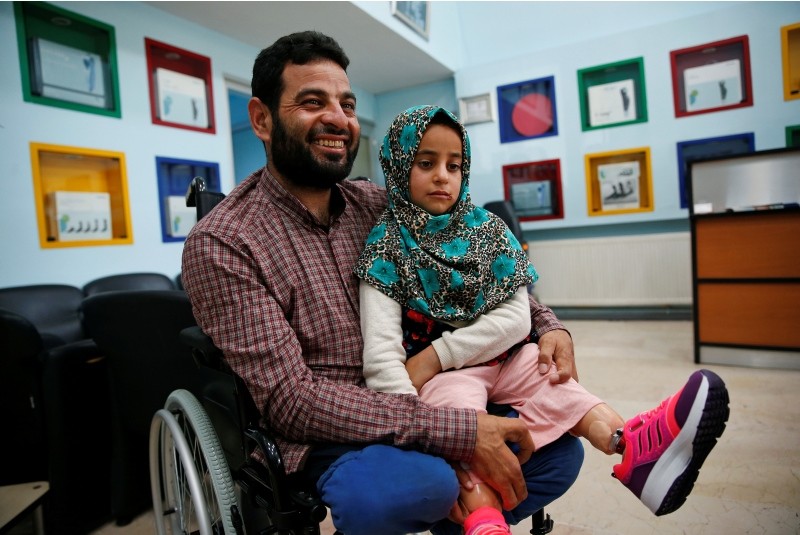 In this Thursday, July 5, 2018 photo, Maya Meri sits on her father Mohammed's lap after being fitted with prosthetic legs at a rehabilitation clinic in Istanbul, Turkey. (AP Photo)
by Compiled from Wire Services
Jul 08, 2018 12:00 am

The 8-year-old Syrian girl, quietly crying in an Istanbul clinic, was overwhelmed by the new set of prosthetic legs she had just received and taken aback by the cameras pointed at her by journalists attending the fitting.

Maya Meri has been in the spotlight since images of her plight hit social media last month. She was filmed in a camp for the displaced in Syria's northwestern Idlib province walking around on contraptions her father made from tuna cans, plastic tubes and fabric.

"I thought of doing something that would protect her while on the ground from stones and other things, so I made these limbs for her," said her father, Mohammed.

Speaking to Anadolu Agency the girl's mother Rabia said, "My daughter is always suffering, because her leg is always getting hit by stones, and she also sometimes gets stuck in the mud."

"She's not playing like her friends, and she has to go to school, so [getting a] prosthesis now is crucial."

Maya was born without legs because of a condition called congenital amputation.

But the girl was clear about what she really wants: "I have one dream, and that is to walk." 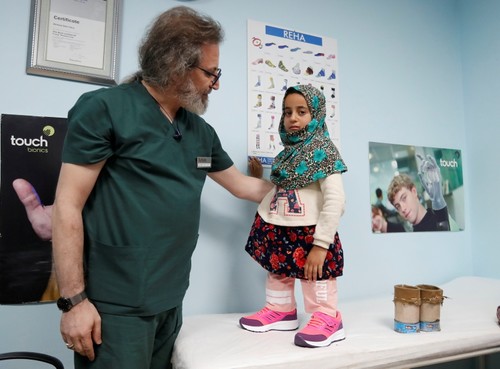 After her pictures went viral on social media, Turkish social media users flooded charities with messages on how to contact Maya for treatment. Her story moved one Turkish prosthetics specialist to reach out to Turkey's largest humanitarian organization, which evacuated her from Syria.

Maya is now in Istanbul with her father, who shares the same disability. On Thursday, as journalists looked on, prosthetics specialist Mehmet Zeki Çulcu took off Maya's makeshift legs. He first wrapped her limbs in protective layers of fabric and then placed her in temporary prosthetics. Camera shutters clicked as Çulcu lifted Maya up and she stood in her purple and pink sneakers, which looked a few sizes too big.

Originally from Aleppo province, the Meri family had to move to escape the fighting.

"We fled to an area that has not witnessed bombardment but it was difficult to live there in a tent on a mountain," said Mohammed, who has five other children still in Syria with their mother.

In the Idlib camp, Maya and her father had to crawl on the bare earth to get anywhere. He said the little girl would be in pain because of the rugged terrain as she made her way to school.

The homemade prosthetics allowed her to move about more easily, and helped her learn how to balance, shortening a two-week process to a single day when she was fitted with her new legs. Çulcu, who took on her case pro-bono, thinks it will take about 2 1/2 months for her to be fully fitted.

"If Maya continues to learn so fast and be so enthusiastic, it might be completed in a shorter time," he said. 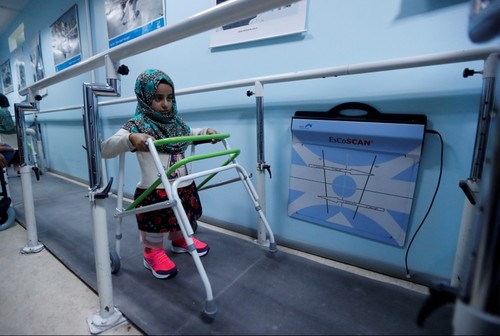 Maya practices taking steps with the aid of a walker. In time, Çulcu said her trial socket prosthetics will be lengthened with a knee joint and then extended below the knee. She grimaces with pain after an hour with her synthetic limbs, but the technicians said that's to be expected and worked to adjust them.

Çulcu said Maya has become a "child symbol" and he hopes the world will be moved by her plight to put an end to the civil war in Syria.

Turkey, which shares a lengthy border with Syria, has become entrenched in the Syrian conflict. The country hosts more than 3.5 million Syrian refugees, and its agencies and non-governmental organizations work across the border to provide aid.

The Turkish Red Crescent is sponsoring Maya and her father's stay in Turkey. Çulcu has pledged to provide prosthetics for the elder Meri after he receives an operation to prepare his limbs for the fitting.

A while after trying her new prosthetics, Maya sat on her father's lap, exhausted and silent as he mused about their future.

"Life is good if I can live here in Turkey, where someone can help us live a good life, because I cannot work," he said.