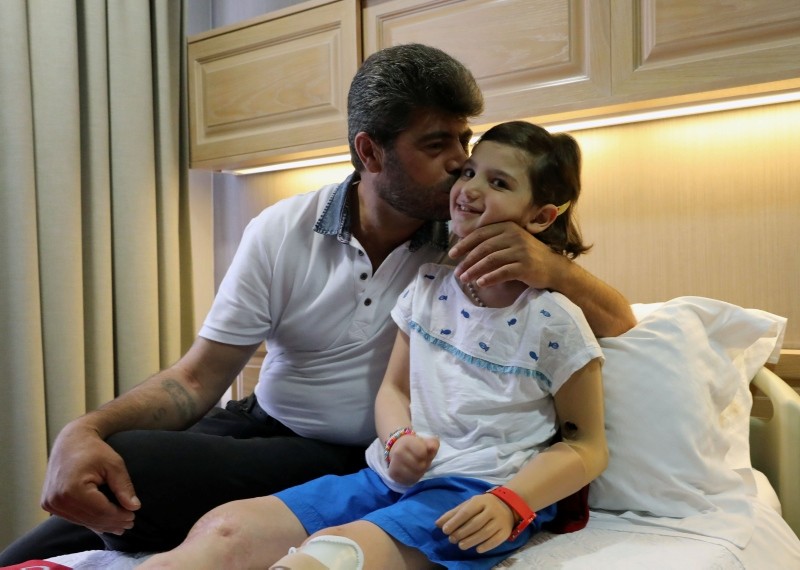 An eight-year-old girl, who lost an arm and the ability to walk in the regime airstrike near Syria's northwestern Aleppo province in 2016, has taken her first steps after 20 months thanks to her treatment in Turkey.

Rayyan Qasim, the affected girl, and her family are struggling to rebuild their lives after their home was bombed on Nov. 25, 2016.

Losing her arm, taking a shrapnel to the head, having a major part of her legs paralyzed, and meeting the world's brutal side at such an early age, Rayyan is now happy to be able to walk again and having a new prosthetic arm.

"My family was at home when the incident happened […] My kids were playing outside. We heard an airplane. A bomb had fallen on our home," Rayyan's father Sheher Qasim told Anadolu Agency. 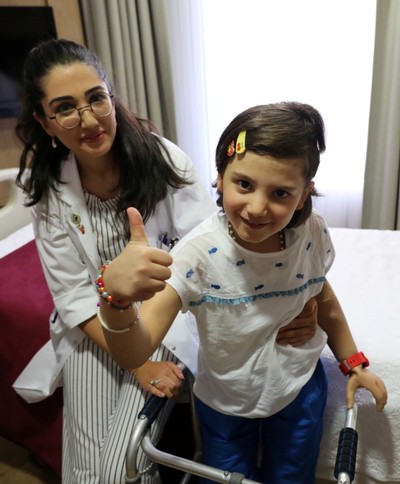 Qasim said he had seven children, and his four-year old had been martyred at the scene, while he took his other two wounded children to the hospital.

Rayyan said she was playing in the yard with her sister, and when the planes came, they did not want to get down "because they were wearing their new and beautiful clothes."

"We did not want to get dirty," Rayyan said.

Human Appeal, a non-governmental organization in Aleppo, helped Qasim coordinate and bring his daughter Rayyan to Turkey's southern Mersin and then to capital Ankara.

"I thank Turkey, Turkish physicians and the hospital administration who treated my daughter, and Human Appeal very very much," Qasim said.

Little Rayyan said, "I want to get well soon and see my mother and siblings. I'm so excited about the day I get back home. I will hug my mother, my siblings and my friends."

"The doctors took good care of me. I started walking now. I want to thank all my doctors and Turkey," Rayyan added.

Rayyan needs more time to walk on her own, and she will come to Turkey every six months to receive a check-up till she is 15 years old.