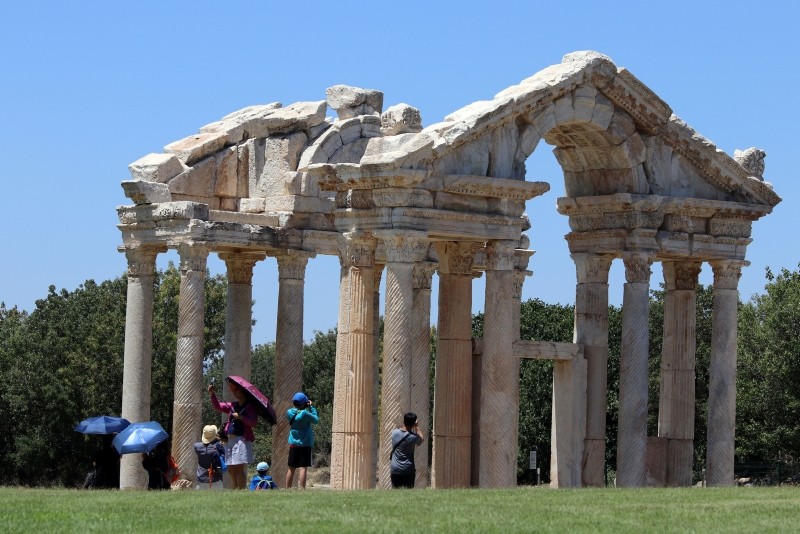 Regarded as the hometown of most prominent sculptors from the Roman period, the ancient city of Aphrodisias in western Turkey mesmerizes tourists with its sculptures and structures.

Located in the Karacasu district of Aydın province, Aphrodisias peaked in the Roman period, although it dates back 7,000 years. It is the most famous city dedicated to Aphrodite, the ancient Greek goddess of love and beauty.

Aphrodisias was once a center for sculpture thanks to its sculpture school and nearby marble quarries. Now thousands of tourists every year come to see its unique statues, reliefs and still-standing structures uncovered through excavations.

The ongoing excavations are being headed by Professor Roland R.R. Smith of Oxford University.

"Aphrodisias was known for its cult of Aphrodite and for its great marble sculptures, from the beginning," said Smith, speaking to Anadolu Agency (AA).

"Since all the buildings were made in marble, there was a very large pool of marble carvers in the city," Smith said and added that a big market was set up inside the city to sell statues for emperors, governors or local citizens.

According to Smith, sculptors in Aphrodisias became famous for their work and started putting their signatures on sculptures as a brand mark. "So, for example, on some of the very finest statues from the Emperor Hadrian's villa in Tivoli, several of the sculptures are signed by Aphrodisians," he said.

With its famous Tetrapylon Gate, Sebasteion Temple, stadium, ancient theater and bathhouse, the city offers a glimpse into the past with the structures and sculptures preserved in near perfect condition.

"You can see a mixture of western and eastern cultures in Aphrodisias. It really is an enchanting place. We are very glad that we came," said Feng Yu Wei, a tourist from Taiwan.

Arzu Salgın, a Turkish tourist visiting from southern Antalya province said that they were impressed as soon as they stepped into the ancient city. "It is very important for excavation works to continue. I was very impressed by the ancient theater, I was not expecting it. A huge city was built in here," she said, although she hails from a region which has the Aspendos Antique Theater, the best-preserved structure of its kind from antiquity, among its list of many landmarks.

"It is great to be here. The city is well preserved and organized. It is beyond my expectations. I did not expect the city to be such a great place," said Beste Yeşilyurt, another Turkish tourist from Ardahan province.